Microsoft Surface Pro X: Windows on Arm usable at long last – but, boy, are you gonna pay for it

Up to £1,700 for something that won't outperform its cheaper Pro 7 stablemate

Hands On The Register dropped into Microsoft's flagship London store to rake a talon over the company's latest Surface gizmos and cop an eyeful of hardware head honcho Panos Panay fondling the Neo and Duo.

Panay spent much of the time poking his handy Duo prototype while his Surface hardware colleagues slathered praise on the platform.

He paused to raise the hopes of Windows fanboys by declaring the best OS for the small form-factor Neo was Windows. He then drove another stake into the heart of Windows Mobile by reiterating that it would be Android powering the mobile form-factor of the Duo.

Both are undeniably attractive devices, but remain a long way from being market-ready.

Naturally, Redmond wasn't about to let us get to grips with the eye-catching dual-screen, Windows 10X-powered Neo or fanboy fever dream (aside from the whole Android thing) Duo, but the soon-to-be-released Surface Pro X, Laptop 3 and Pro 7 were present and correct.

The Laptop 3 is a worthy successor to the Surface Laptop 2, with a far nicer metal finish available and a 15-inch screen added to the option list as well as a bump in performance.

While the Surface Laptop 3 permitted the removal of its SSD (although not by ordinary users), it is business as usual for the Surface Pro 7, which received warmed-over silicon. However, the flashier and slimmer flagship Pro X hogged the limelight.

Microsoft: This is how we want you to make Arm hardware 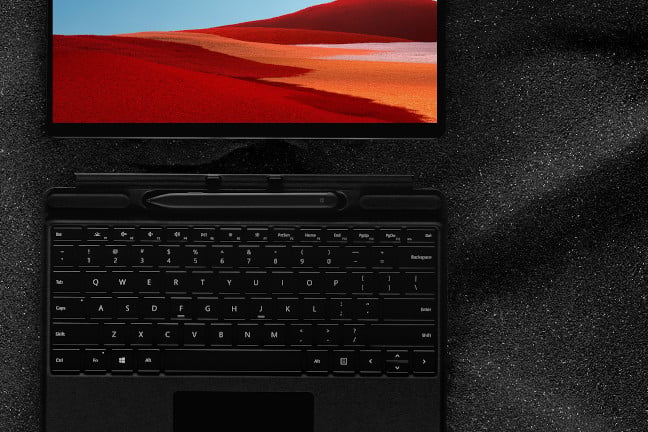 It's fair to say that Windows on Arm has hardly set the world alight, with the early efforts being woefully underpowered and even the latest kit commanding a premium price for less-than-premium performance.

With the Surface Pro X, Microsoft is demonstrating what it reckons can be accomplished as clearly as it can to vendors that have, so far, left the market underwhelmed. To that end, the company has buddied up with Qualcomm to come up with a tweaked Arm-based processor in form of the SQ1 chip and stuffed the thing into a chassis that looks a bit, but not exactly, like a Surface Pro 7.

The reduction in space between edge and screen didn't affect our ability to hold the thing, but the shaving in thickness from 8.5mm to 7.3mm was immediately noticeable and, in our minds, not entirely welcome. While the Surface Pro had always felt relatively solid, the Pro X felt a little flimsy, and our first thought was "this will need a case..." 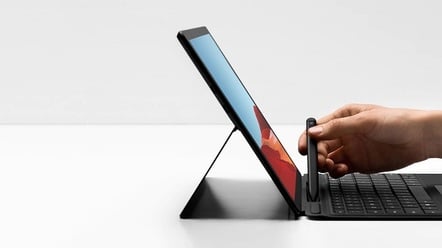 Microsoft has also produced a new keyboard for the Pro X, which was pleasant enough to use, as well as a rechargeable pen which, if inking is your thing, was a delight to use on the 2,880 x 1,920 PixelSense display.

The Pro X we had a play with was the 16GB version and performance felt snappy enough. It will, of course, run native Windows on Arm apps as well as the majority of 32-bit Intel-based code (so no 64-bit Intel shenanigans allowed at the moment) and certainly seems streets ahead of previous attempts at Windows on Arm. The device starts at £999, after all.

The Arm chippery brings LTE support (sadly we didn't get a chance to pop a SIM into the chassis to see how things performed) and Wi-Fi 5 for regular wireless connectivity. 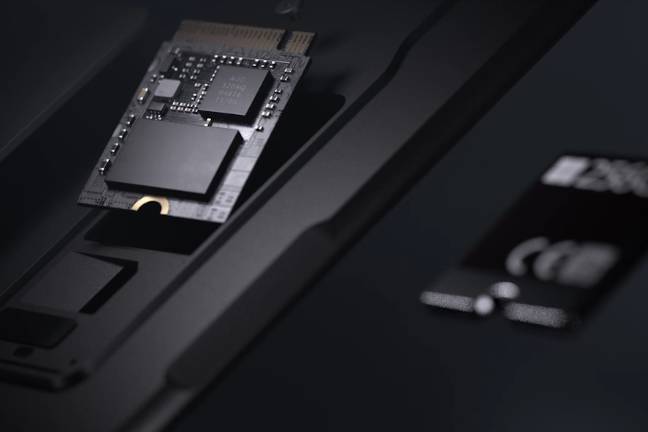 Going back to the future with a replaceable SSD

Though the SSD can be switched out (Panay demonstrated the simple pop-off of the cover), the SD slot is gone and the old USB-A socket of the Surface Pro replaced by a pair of USB-C ports. We reckon users will miss the ability to slot an old thumb drive into Microsoft's latest flagship.

While Panay was at pains to plug the "serviceability" of the new devices, only that SSD can be removed. Dealing with a cracked screen or failed battery remains outside the realm of the average IT department.

Whinges aside, we found the performance of the device a cause for optimism compared to the sluggishness of other attempts at Windows on Arm. The price, however, is a cause for concern. Due for release on 19 November, the device starts at £999 for the 8GB version, but the 16GB version, from a wallet-busting £1,449, buys a bit more future proofing.

And then you need that keyboard and pen combo, which will set you back another £259.99. So more than £1,700 for a Surface Pro X that is slimmer, longer lasting, but won't outperform its stablemate, an i7-powered Surface Pro 7 for the same money. The 7 also retains the USB-A, adds a single USB-C and keeps that SD card slot too. And it starts at £799.

Of course, an iPad Pro with similar storage can be picked up with keyboard and pen for around the same price.

The Surface Pro X is undeniably a pleasant bit of kit to use, but having used one side by side with the Surface Pro 7, we're not sure the premium demanded by the slimmer chassis, larger screen and Qualcomm-inspired tech is worthwhile compared to its stablemate, particularly if ever called on for more intensive work.

Unless you really, really need to swap out that SSD. ®