A Swedish engineer's umbrage at a traffic ticket has led to a six-year legal fight and now a global change in the speed with which traffic light signals are timed.

After Mats Järlström lost an initial legal challenge in 2014, a federal judge in January this year ruled Oregon's rules prohibiting people from representing themselves as engineers without a professional license from the state are unconstitutional.

And now Järlström's calculations and advocacy have led the Institute of Transportation Engineers (ITE) to revisit its guidelines [PDF] for the timing of traffic signals. As a result, yellow lights around the globe could burn for longer – ITE is an international advisory group with members in 90 countries.

Järlström discovered a problem with the timing of traffic lights in Beaverton, Oregon, after his wife Laurie received a $260 ticket for a red light violation from an automated traffic light camera in 2013.

Järlström, who studied electrical engineering in Sweden, challenged the ticket, arguing the timing interval for yellow lights fails to account for scenarios like a driver entering an intersection and slowing to make a turn. A slightly longer interval, he argued, would allow drivers making turns on a yellow light to exit intersections before the light turned red. Even a small timing increase would help – the automatically generated ticket in this case was issued 0.12 seconds after the light turned red.

When Järlström brought the issue to the Oregon State Board of Examiners for Engineering and Land Surveying, the state board opened an investigation in 2015 and fined him $500 the following year for practicing engineering without a professional license.

Thanks to the assistance of the Institute for Justice, a legal advocacy organization focused on limiting the scope of government, Järlström has won not only the right to refer to himself as an engineer, a refund of the surveying board fine (though not the ticket penalty), and the removal of the moving violation from his car insurance premium, but also the opportunity to fix a formula that has governed traffic light timing since 1960.

Since the injunction prohibiting Oregon from enforcing its unconstitutional speech restriction, Järlström has been working with other engineers and advocates to change the way traffic lights work. Over the summer, an ITE panel met to hear arguments along those lines and last month it agreed light timing should be reconsidered. 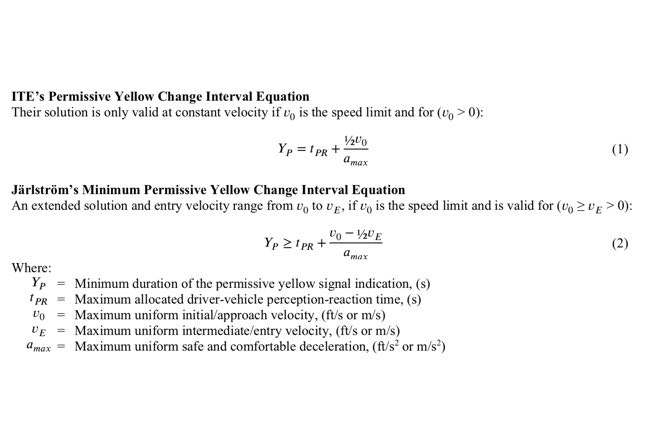 "The yellow traffic signal was first conceived in 1920 and in 1960, scientists [Denos] Gazis, [Robert] Herman, and [Alexei] Maradudin presented the foundational science still in use today," Järlström said in an email to The Register. "It is a historic moment to now update the science by extending the 1960 solution to also be applicable to turning maneuvers."

Järlström said if the ITE accepts his solution, the duration of a yellow light in the right-turn scenario he described in 2015 would be extended from 3.2 seconds to 4.5 seconds using current input values – driver-vehicle perception-reaction time and maximum safe, comfortable deceleration. Such timing may vary depending on other considerations, but in general the adoption of Järlström's formula should result in slightly longer yellow lights.

The ITE staff will develop and formalize the proposed changes to produce a final document called the Recommended Practice that will be submitted to the ITE Board of Directors for final approval in early 2020.

Jarlstrom said it has been a long process to reach this point. In addition to his own efforts, he credited the support of Alexei Maradudin, Jay Beeber, Brian Ceccarelli and the National Motorist Association’s Joe Bahen. He also said test equipment made by UK-based Racelogic provided a way to prove his theories.

"Our common goal is to improve traffic safety and fairness through our signalized intersections worldwide," said Järlström.

In a way, history is repeating itself. The initial 1960 light timing work came about because one of the scientists involved believed he'd been wrongly ticketed. In email correspondence with Järlström, Maradudin explained that he became a co-author of the 1960 paper because another co-author, Robert Herman, invited him to spend time at the General Motors Technical Center to work on traffic light math. Herman did so, Maradudin said, because he had received a red light ticket that he felt was unfair. ®