PIC There may be a new dinky dwarf planet that’s even tinier than Ceres, the largest object in the main asteroid belt that currently holds the title as the smallest dwarf planet in our Solar System.

Known as Hygiea, after the Greek goddess of health and cleanliness, the object was first discovered in 1849. The rock, measuring just under 430 kilometers across, was relatively uninteresting and was accepted as the fourth largest asteroid.

But fresh observations made by a large team of astronomers using the European Southern Observatory’s Very Large Telescope have revealed that it may actually be the tiniest dwarf planet after all.

The latest snaps of Hygiea show that the asteroid fulfills a fourth vital requirement to obtain a dwarf planet status: it has enough mass - about 8.32 × 1019 kilograms - to mold itself into a spherical shape under its own gravity.

As an object in the main asteroid belt, it already ticks off three other requirements: it orbits around the Sun, it isn’t a moon, and it hasn’t cleared its local neighborhood of debris unlike a planet. 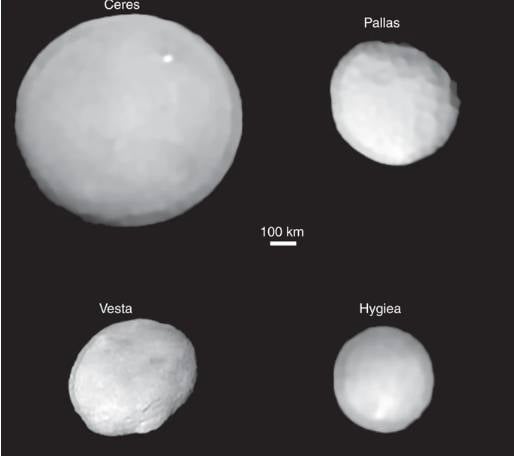 Ceres also has the same four properties, but at 950 kilometers in size it’s no longer the smallest dwarf planet, according to the results published in Nature Astronomy.

“By comparing Hygiea’s sphericity with that of other Solar System objects, it appears that Hygiea is nearly as spherical as Ceres, opening up the possibility for this object to be reclassified as a dwarf planet,” the paper said.

The team discovered another surprising property in Hygiea too. The round rock appears to have a dimpled surface but it seems to lack very large impact craters.

As the main member of a collection of nearly 7,000 objects classified under the Hygiea family, these hunks of space rocks are believed to have formed from a giant historic collision between a projectile and a larger asteroid that occurred some two billion years ago. Astronomers, therefore, expected Hygiea to bear the scars from such an impact event. Instead, its surface only had two meager craters.

“Neither of these two craters could have been caused by the impact that originated the Hygiea family of asteroids whose volume is comparable to that of a 100 km-sized object. They are too small,” said Miroslav Brož, co-author of the study and a researcher at Charles University in Prague, Czech Republic.

In the latest observations, the researchers also measured a new rotation period for Hygiea of 13.8 hours; the updated time is half of the current value. ®