Microsoft has rolled out the cloud-based version of its venerable project management software, Project, along with a new basic subscription option.

Redmond first announced its intention to rebuild Project at its 2018 Ignite conference.

Although Project Online has existed for some time, it was not fully integrated with Office 365. The new version is built on the Power Platform (Power Apps, Power BI, Flow) and provides services based on Microsoft's Common Data Service, a unifying API for the data in an Office 365 organisation.

The new services include Roadmap, which supports Azure DevOps projects as well as those created by Project itself, and Project Home, where users can track the projects in which they are involved. The application supports grids, boards and timeline (Gannt) charts, and includes a scheduling engine.

Project is part of the Office family but is not bundled with the likes of Word and Excel. Instead, it is an extra-cost subscription, formerly called Project Online Professional and Project Online Premium, but now to be known as Plan 3 and Plan 5 (presumably to echo its E3 and E5 Office 365 plans). There is also a new basic Project subscription, with the inspiring name of "Plan 1", which will be introduced later this year at $10.00 per user/month. This does not include use of the desktop Project application.

Teams integration is a key part of the revamped Project and will mean that Project members get the joy of features including file sharing, chats and meetings, and much more. It is also possible for team members to edit tasks simultaneously. 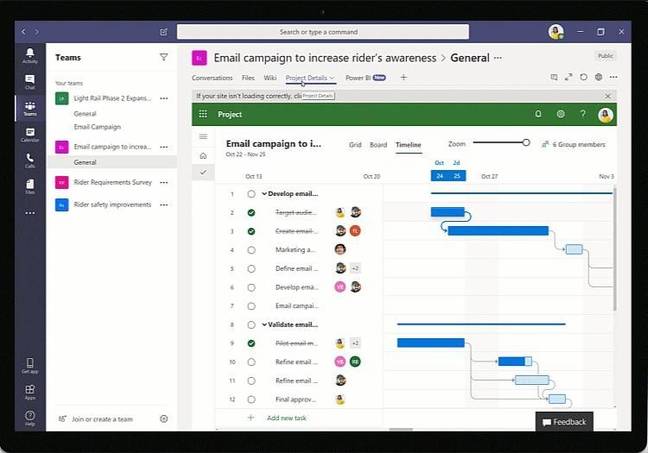 Integration into the Power Platform enables visualisation of project progress in Power BI as well as automated workflows via Flow – though note that these applications require additional subscriptions for full use.

While Microsoft has not yet stated this, Project subscriptions may be a good candidate for the company's new self-service licensing option, which enables users to bypass their IT admins in order to progress with Power Platform capabilities.

Microsoft, however, noted: "We recognize that many customers are using Project Server and many need to continue to use it for some users or geographies due to compliance and other requirements" – language that implies trouble for those users.

It makes perfect sense for Microsoft to pull Project fully into the Office 365 family, and to provide an upgrade path for users of the simple Office 365 Planner service. That said, organisations reliant on the old Project can expect some migration pain. ®