The Outer Worlds: Ever wished Fallout 4 was more like New Vegas? Here ya go... in spaaace

The RPG Greetings, traveller, and welcome back to The Register Plays Games, our monthly gaming column. This time we're heading spacewards again, to The Outer Worlds to be exact, otherwise known as Halcyon, a corporate hellhole colony at the arse-end of the galaxy.

There has been quite the buzz around The Outer Worlds (trailer) since its announcement last year – and for good reason. Among gamers of a certain age, the studio behind the title holds huge promise.

Back in the late '90s and early '00s, Interplay subsidiary Black Isle made a bunch of classic role-playing games (RPGs) based on Dungeons & Dragons and beyond – legendary titles like the first two Fallouts, Planescape: Torment and the Icewind Dale series, as well as publishing and collaborating with kindred spirits Bioware on Baldur's Gate and its sequels.

Interplay's shaky financial situation lost it the licence to publish D&D games in 2003, a year and a half into the development of a third Baldur's Gate title (now in the gentle hands of Larian Studios), and the entirety of Black Isle would soon be laid off. The devs, frustrated at their hard work being binned, left and founded Obsidian Entertainment.

Obsidian's initial MO was to produce sequels to established IP, like Star Wars: Knights of the Old Republic and Neverwinter Nights. However, their crowning achievement for many is the 2010 Fallout spinoff New Vegas. These days Bethesda – of The Elder Scrolls fame – owns the rights to make games in the series, but it invited Obsidian to have a go following its first take on the post-apocalyptic RPG with the third sequel in 2008.

Bethesda had remade Fallout in its image (and would do so again with 2015's fourth mainline instalment), eschewing Black Isle's isometric view for a first-person experience in the vein of 2006's The Elder Scrolls IV, better known as Oblivion. Obsidian ran with this to critical acclaim, and many still believe New Vegas trumps Bethesda's attempts in all areas – writing, story, factions, player agency and the ability to roleplay. Not surprising, perhaps, considering that Fallout's progenitors now ran the studio. 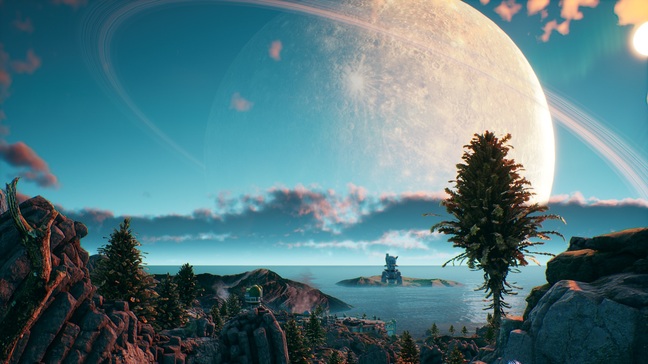 So on hearing in 2018 that Obsidian was working on more original IP following the success of its crowdsourced isometric throwback Pillars of Eternity (2015), gamers were rubbing their hands with glee.

Comparisons between The Outer Worlds and modern Fallout simply can't be avoided, but that's no bad thing. Let's face it, this style of RPG curated by Bethesda is responsible for some of the most wonderfully immersive games ever made, notably 2011's The Elder Scrolls V: Skyrim, engendering an authentic spirit of adventure, freedom, exploration and curiosity.

Obsidian proved that its bread-and-butter writing chops could thrive in this environment with New Vegas. Though it couldn't create another Fallout game (why would it want to?), The Outer Worlds, released last Friday, generously caters to those same feelings. 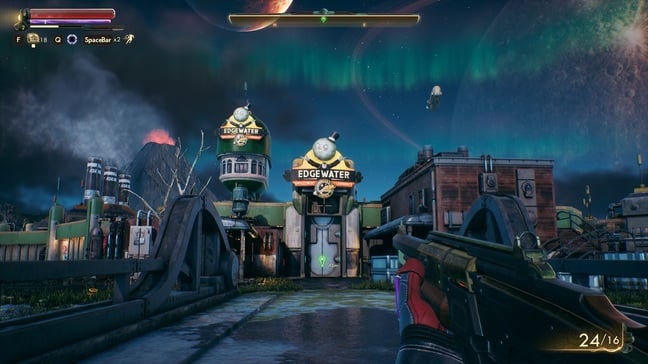 This tongue-in-cheek sci-fi romp positions the player as some poor sod who has spent a rather chilly 70 years among the best and brightest scientists and technicians Earth has to offer in suspended animation aboard the vessel Hope, which was originally destined for the far-flung Halcyon colony. Without a hint of irony, however, the ship has been considered for all intents and purposes "lost" by the Halcyon Holdings Board of Directors, known colloquially as The Board, the all-powerful megacorp with a stranglehold on almost every facet of life in the colony. Later, when you attempt to explain to various Halcyon denizens where you have come from, they dismiss the Hope as a myth and accuse you of subversive hearsay.

The ship is boarded by a rebel Doc Brown-type character, a nutty professor by the name of Phineas Vernon Welles, whose wanted poster can be seen across the colony. By complete chance, he manages to thaw you out despite you being way beyond your use-by date. You are then tasked with helping him develop a fool-proof way to reanimate the rest of the Hope's passengers – whose genius he believes could turn the tide against the capitalist nightmare that has taken root in Halcyon – without the risk of "explosive cell death". 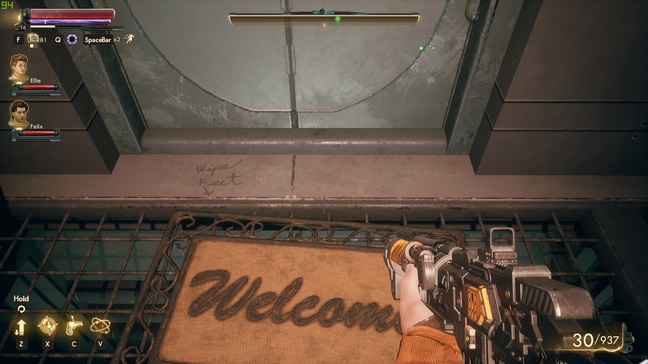 The game is stuffed with goofy humour at every turn

By "capitalist nightmare", understand that The Board owns literally everything, including the other corporations active in the star system, to the point that suicide is a crime, but only because it's damage to company assets. No family to pay the fine and rent a burial plot? Next of kin still has to cover the cost, even if that's the departed's neighbour, usually by shouldering a wage deduction.

After awakening, the first 15 minutes to three hours are spent doing what classic RPG fanatics love most – character creation and min-maxing (that's umming and erring over where to stick your stats in English). The attributes system covers strength, dexterity, intelligence, perception, charm and temperament, and you can distribute points into these to determine what sort of things your character is most adept at, be it silver-tonguing someone into cooperation, hacking a terminal, or shooting someone's head off at great distance. 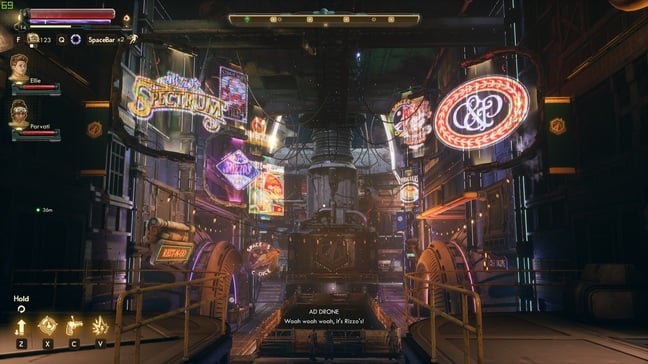 The promenade on the ship-turned-space-station Groundbreaker

Attributes cannot be changed afterwards without a complete respec. They provide base bonuses to the fleshed-out skills system, which will build and improve with experience gathered, including melee, ranged, defence, dialogue, stealth, tech and leadership. Over time, you will need to stash a certain amount of points in a certain field to, say, pick a certain lock or intimidate a certain meathead. All very familiar to those who have played Fallout: New Vegas and its Bethesda stablemates.

Once that's done, you're stuffed in an escape pod to make landfall on Terra 2, a terraformed volcanic planet where a freelancer in the employ of Welles named Captain Alex Hawthorne awaits. Except he forgot to move away from the location beacon and is crushed by the pod. So his ship is now yours. The Unreliable, which you can later fill with crew to accompany you on your adventures, becomes a base of operations and how you traverse the Halcyon system. 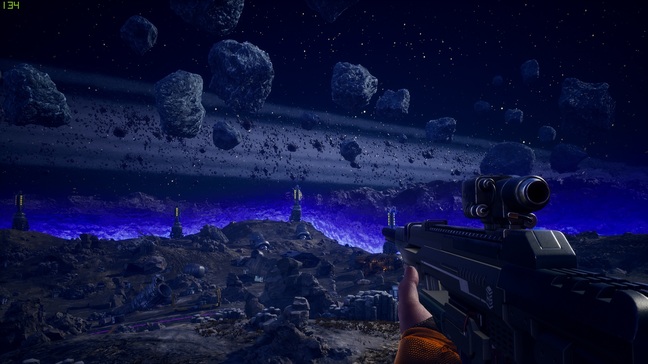 Now you're free – to become hopelessly distracted and steal everything not nailed down. As ever, the main story line hangs over all to be picked up at your leisure, but you will quickly find yourself mired in many delicately interlaced quest lines taking you all over Halcyon at the whims of factions and individuals waving handsome rewards. And if you're anything like me, the main story will take a backseat until every other available side plot has been exhausted. Sometimes you will be faced with choices that may earn you the hatred of an entire faction or cause the death of hundreds. The excellent writing, world building and fully voiced characters only make those decisions even more nerve-wracking. 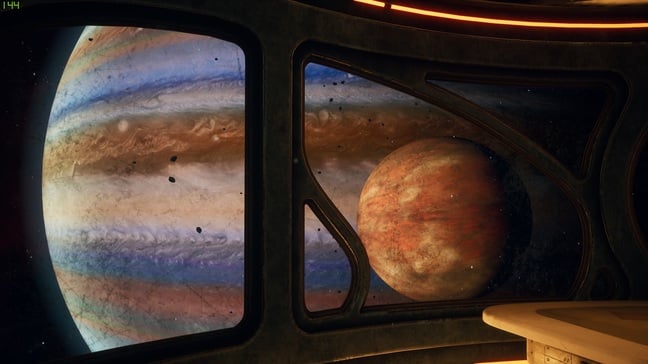 View of Monarch from the captain's quarters of the Unreliable

With the entire system at your fingertips, The Outer Worlds does not have one enormous single map like Fallout 4 or Skyrim, but many much smaller ones. However, they are still packed with things to explore. As my crewmates and I crawled across the peril-fraught surface of the moon named Monarch seeking information on illegal chemicals, I noted that I had been at it for hours on end. The trip to my goal was a long walk by itself, compounded by the numerous unfriendly wildlife and towns along the way, all with multiple storylines begging for my interference. Assassinations, corporate espionage, murder mysteries, dropoffs gone wrong, missing persons… I'm still not at my destination and there is more yet to do before I arrive. 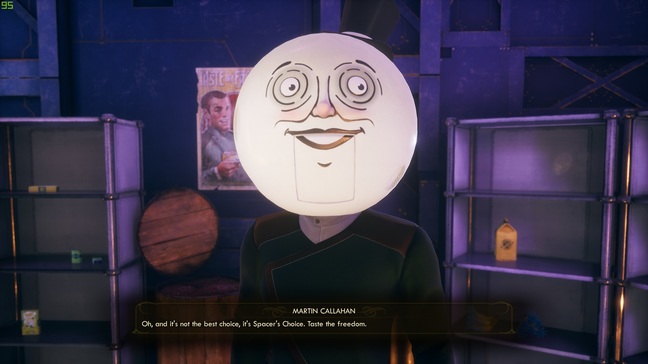 A depressed Spacer's Choice employee, contractually obliged to wear this helmet for the rest of his life

The solution to hostile elements is guns – lots of guns – and an assortment of sharp or heavy sticks. In combat, The Outer Worlds is more like a first-person shooter (FPS) with the added side-effect from the thawing of being able to slow down the flow of time for some reason. This mechanic is reminiscent of Fallout's Vault-Tec Assisted Targeting System (VATS), which would pause the game and allow precise targeting of individual body parts. It's very similar in that aiming the crosshair at an area of an enemy shows the effects of firing, whether that's extra damage or causing status ailments, relying on a meter that depletes, then gradually recharges. On leaving the airlock, you can also choose to bring two crewmates out with you, all of whom have unique abilities that can be activated in the heat of battle.

Gunplay isn't particularly deep or challenging. Though there is sway and recoil, it's not always necessary to aim down sights – but this is a symptom of The Outer Worlds not really being an FPS. Combat is, at least, a great deal smoother than Fallout 4's and enemies are less bullet-spongey, though weapon customisation falls short in comparison. You can find modifications throughout the world and slap them on your weapons to alter attachments and damage types, but it's nowhere near as detailed. On the other hand, it could be argued that Fallout 4's obsession with crafting and base building – notwithstanding its hideously dumbed-down dialogue options – ruined the game. 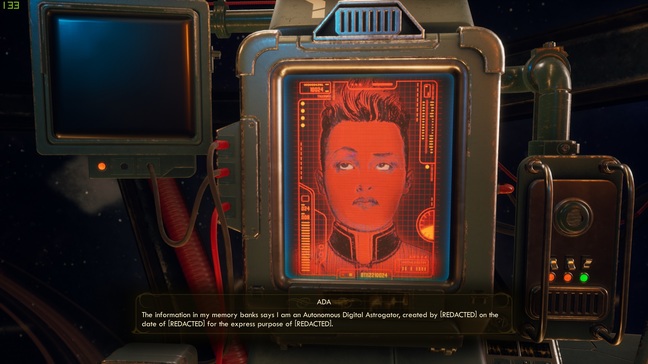 There are none of those silly Rust-like shenanigans in The Outer Worlds, which sticks to its guns as a brilliant story-driven swashbuckling adventure in a colourful Space Western setting where capitalism won quite a bit too much. Sparks fly from every corner of every neglected settlement, space station and rust-bucket ship, and the brainwashed common people live in poverty and desperation. You might just be the one to save them. If you had hoped Fallout 4 would be more like New Vegas, this is a must-play. ®

I realised after the fact that some of my screenshots had captured my framerate counter too, and I wasn't going to go back to each location just to reupload these files. However, it's a useful indication of the kind of performance you can get in different environments on the PC version with every graphical setting whacked up to "ultra". I rock an RTX 2080 and a considerably more dated i7-4790K.