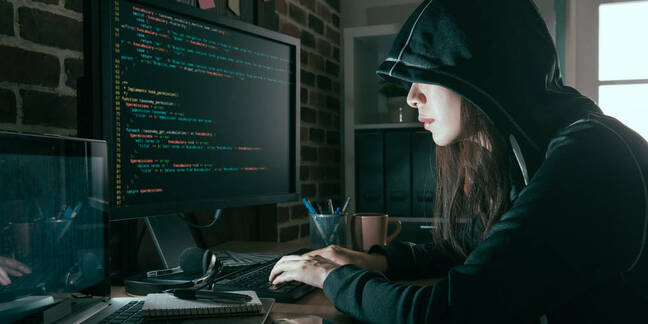 Cassie was studying for the computer security industry qualification CISSP when the harassment started.

A friend she had met at a nearby hacker meetup offered to help her prepare for the exams, and guide her through the world of infosec.

"He asked me about what my goals are and offered to mentor me. He also offered to provide me with resources to study for the CISSP certification exam," she said.

"I gladly accepted his offer in hopes of advancing my career and provided him with my email address."

As is often the case, he wanted to be more than friends, and when she turned down his romantic advances, the once seemingly friendly gestures deteriorated into sustained harassment. Cassie said that, despite making it clear she was not interested, the man continued to pester her with messages, and approach her at infosec events.

"While I was studying for the CISSP exam, he would frequently invite himself over. He would insist that I needed to relax and that he would teach me to pick locks," Cassie told The Register. "I politely declined his offers. I was okay with being around him in public, but not alone."

This experience is not unique. People in nearly every profession have complained of harassment from their colleagues and superiors for decades. For hackers, however, there are various factors that can make reporting a harasser particularly difficult for those who are trying to break into the field.

'A desire to protect and defend'

Gabrielle Hempel, a pen-tester with BlackMirage, told The Register she has seen firsthand and through conversations with other women how the tightly knit hacker culture can intimidate those who want to speak up. Really, that close-knit culture should use its energy to defend and stand up for victims of abuse, rather than maintain the status quo and shield abusers.

"The hacker community largely came about as a subculture, and I think there is a strong sense of loyalty among people in it," Hempel said. "When you all share this hobby or passion and run in the same circles in an industry where everyone seemingly knows each other, there’s a desire to protect and defend some of the established people in the industry."

Indeed, when allegations surfaced against prominent men in the world of cyber-security, it was clear that the victims in each case had their early complaints of harassment and abuse swept under the rug or shouted down by other members of the community.

"We put people up on pedestals and then we don't want to hear about it when they do something wrong," said Cooper Quintin, a staff technologist at the Electronic Frontier Foundation. "You get this sort of myopia to anything they do wrong because of all the good work and stuff they have done. I really think that that is at the heart of the problem."

This was certainly the case for Cassie, who said that after she finally stepped up and tweeted about the harassment she was receiving, all hell broke loose. Her harasser had friends within the infosec world who began to target her and those close to her with further attacks.

"I tried to come out about this the end of July and [his friend] had her followers coming for me. I was very stressed out," she said. "I left work early one day because I was having a panic attack. This is a social media nightmare and she also involved my significant other which I did not appreciate."

This, again, is not something exclusive the infosec and hacking community. It is not too dissimilar to the entertainment, media, and music businesses, in which newcomers, particularly young women, are subjected to harassment or worse by powerful figures who are protected by others.

"I have worked with women who have had no idea where to start or what to do because they knew the person harassing them was in a position of power within our industry, and they were worried about the repercussions," said Hempel. "I do know of quite a few women who have come forward and been attacked from all angles by supporters and friends of their harasser. I think it’s definitely part of the problem."

So, what is the solution?

For one thing, the hacking community needs to change the way it treats its heroes, or even rethink who its heroes really are. While the allure of the "rock star" hacker with the big personality can be hard to resist, most of the best research is being done by people with little desire for the power and attention that is so often used to abuse others.

Cassie, meanwhile, has started an organization dedicated to protecting those new in infosec: Gate Breachers provides resume review, mentorship, and career advice for women and those of underrepresented genders.

She also has advice for people facing harassment amid their efforts to pursue careers in information security.

"I would advise speaking to other women even if it’s through the whisper network. If enough women see a pattern of this behavior being exhibited then come together and say something," she said. "Chances are you aren’t the only one. Your voice could help 10 other women." ®