Ignite Microsoft has released a public preview of a new Office for mobile devices, combining Excel, Word and PowerPoint into a single application and adding new features for quick actions such as converting images to text or creating and signing PDFs.

This new app for iOS and Android was announced today at the company's Ignite event in Orlando, Florida.

Microsoft is calling the new application by the imaginative name of "Office". It does not replace the existing mobile apps, at least not initially, but provides the full features of the current products – absolutely nothing is taken away, The Register was told – while taking less space than installing the three separate apps as well as adding new capabilities. Therefore, there is little reason to prefer the old apps unless you only use one or two of them, or find the additional features a distraction.

Office mobile opens to a home screen with recently opened documents, notes and documents "Recommended" through the mysterious powers of Microsoft AI. You can then tap the New document icon to create a Word, Excel or PowerPoint project, though with additional options, in particular the ability to start by scanning a physical document to extract text, or in the case of Excel, a table. 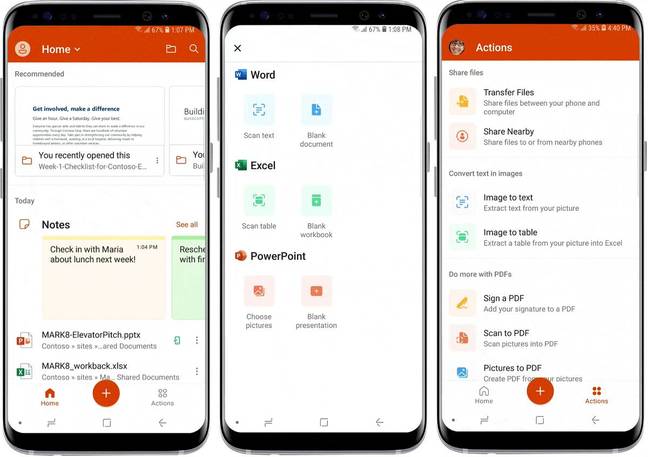 The new Office app showing the home screen, the New document dialog, and the Actions screen

Some of these features will be familiar if you know Microsoft's Office Lens application, which does scanning and Optical Character Recognition (OCR), and it seems that Lens has been baked into the Office app alongside the three core applications.

Microsoft has also added an Actions feature, which lets you transfer a file to a computer, share with other nearby devices, access the OCR capabilities mentioned above, or work with PDFs. The PDF actions include adding a signature – via scrawling on the screen rather than digital signing – and creating PDFs from images.

The company has also announced enhancements for Outlook mobile. Email notifications on the lock screen will be encrypted so that no content can be viewed without first unlocking the device. Search is being improved with a "top results" feature, and screen space will be better used on tablets with a second pane for search results. On Outlook for iOS, the "play my emails" voice feature is now generally available.

Outlook users are also getting a personal calendar, the idea being to distinguish between personal and work commitments. We can also expect more AI-powered features including "Meeting Insights", which attempts to show relevant files and email conversations alongside scheduled meetings. ®