GitHub's annual "State of the Octoverse" report shows that Python has overtaken Java as the second-most popular language after JavaScript, based on the primary language of repository contributors.

Python is not the fastest growing language though, that honour belongs to Dart, up 532 per cent, probably thanks to the growth of Flutter, Google's cross-platform development framework. Next is Rust with 235 per cent growth. Python was up by 151 per cent, impressive given that it was already a top-three language. 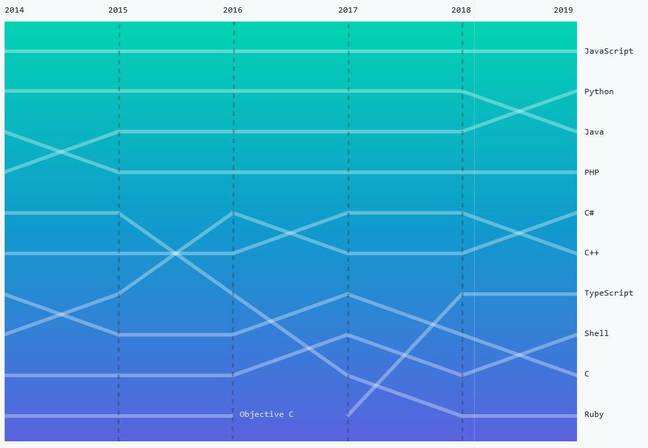 The number of developer accounts on GitHub increased by around a third over the year, with around 10 million newcomers in 2019. Looking at where contributors come from, Asia tops the list, followed by Europe, North America, South America, Africa and Oceania.

The top open-source project by number of contributors remains the Microsoft-sponsored Visual Studio Code. Next, oddly, is Microsoft's Azure documentation – reflecting the huge amount of stuff now on offer in Microsoft's cloud. GitHub is owned by Microsoft and is used extensively for the company's own projects. If you forget about the Azure docs and GitHub's First Contributions tutorial, the next most popular project is Flutter, followed by TensorFlow, React Native and Kubernetes. Looking at how this has changed since last year, it is notable that Flutter is a newcomer to the top 10, while Angular has dropped out of the list.

GitHub took a look at dependencies in the stats, noting that the top 50 Maven packages (widely used by Java applications) each have an average of 167,000 projects that depend on them. The figure for RubyGems is even higher, at 737,000 average dependent projects. The statistics show how critical these packages are to the industry, and also serve as a reminder that a security issue in one of these dependencies impacts thousands of other projects. Three projects – Lodash (JavaScript utility functions), Express (Node.js web application framework) and visionmedia/debug (Node.js debugging utility) – are depended on by over four million repositories each.

Unfortunately GitHub is not showing open-source contributions by organisation this year. Last year, Microsoft topped the list followed by Google, Red Hat, US Berkeley and Intel. Did Microsoft's acquisition of GitHub in June 2018 cause some of those companies to reduce their GitHub contributions in favour of an alternative such as GitLab? Probably, but GitHub has chosen not to say. Note, though, that key projects originating from Google – TensorFlow, Flutter and Kubernetes – remain on GitHub. ®