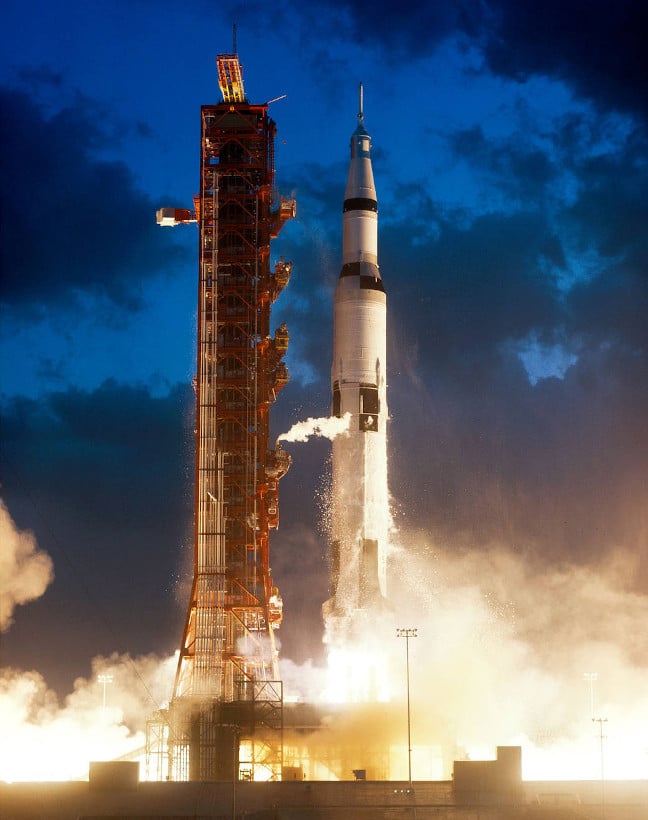 Those were the words of excited US news anchor Walter Cronkite 52 years ago as the first Saturn V rocket sent Apollo 4 into space.

The launch on 9 November 1967 was a hugely significant moment for NASA, and the Apollo programme as a whole. It was the first launch since the Apollo 1 disaster earlier in the year, and the first flight of America's monster rocket, the Saturn V.

Demonstrating that the Saturn V would work as promised was a key milestone, and the mission had already been delayed before the Apollo 1 fire caused NASA to pause for breath in the race to the Moon. Apollo 4, of course, would carry no crew, but it would act as a test bed for the vehicle that would eventually carry humans into orbit and on to the Moon.

Apollo 4's Command and Service Module (CSM) is an interesting beast since it was one of the test Block I vehicles (PDF) and modified to certify some of the changes planned for the upcoming crewed missions in the Block II spacecraft. Those modifications included tweaks to the heat shield, the umbilical connecting the Command to the Service Module and, following Apollo 1, an updated hatch (PDF).

No crew meant that no fripperies such as couches, displays and controls were needed, although a mass simulator for the lunar module was included in the payload.

The mission was also to be an "all-up" test. Where before a stepwise approach might have been taken to check out the stages, Apollo 4 was a complete Saturn V, and the primary objective was to ensure the thing actually worked.

After the Apollo 1 fire, and with each stage of the Saturn having its own issues, it was a risky move. However, with Russia moving forward with its own Moon programme, NASA felt it had no time to lose.

As well as a test of the Saturn V itself, Apollo 4 was also the first launch from the newly constructed Pad 39A and would exercise the mission support apparatus, including the shiny new Firing Room at Cape Canaveral.

The first Saturn V launch occurred at 12:00:01 UTC on 9 November 1967, destroying or damaging chunks of the launchpad as it did so. The acceleration was substantially less than expected, but the launch overall was a complete success.

Watching the launch, Cronkite described the shaking of the building from where he was observing as the Saturn V's five F-1 engines did their thing (skip to the end of the above video to hear the usually measured tones fall away in the heat of the moment).

The centre F-1 engine of the S-IC first stage cut off at the 135.5 seconds mark, with the four outboard engines shutting down at 150.8 seconds, as the stack was travelling at 9,600km/h. The S-II second stage then fired until it too cut off at 519.8 seconds.

The S-IVB third stage and CSM were placed in a 187km x 183km orbit from where the S-IVB performed its first in-space reignition to send the stack into an elliptical orbit with an apogee of 17,218km. The CSM separated from the S-IVB and fired its propulsion system to increase that apogee to 18,092km with a perigee below the Earth's surface.

Having passed the apogee, the Service Module Propulsion System was fired once again to increase the re-entry speed in a simulation of a lunar return.

Eight hours, 36 minutes and 59 seconds after launch, the mission was over and was, as far as NASA was concerned, a success. The agency had taken a gamble that all the as-yet unflown components would function as designed and won handsomely. A failure, coming after Apollo 1, could have spelled the end for NASA's lunar ambitions.

Things did not go so well for the next Saturn V, Apollo 6, where pogo oscillation did for some of the J-2 engines and, famously, Apollo 12 demonstrated that the Saturn V and lightning did not go well together.

As a postscript, while 9 November 1967 marked the first flight of the Saturn V, less than a year later, NASA administrator James Webb effectively called time on the programme amid constrained budgets by terminating the procurement of long lead items needed to make more of the things beyond the first Moon landings. ®