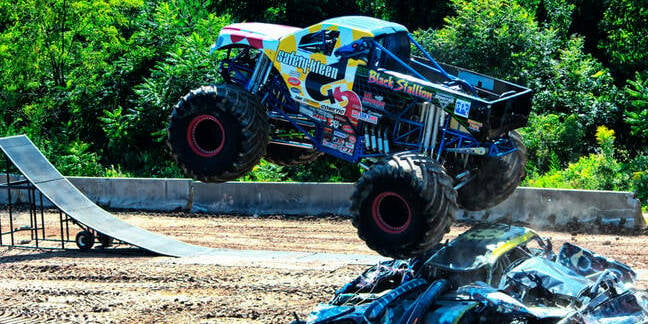 Sales of greener cars remain proportionately minuscule in the US – even Elon Musk's shiny Tesla brand is failing to get more gas-loving Americans to ditch their petrol monsters in favour of something electric-based.

According to analyst estimates, 4.2 million passenger cars were sold in calendar Q3, equating to a year-on-year decline of 1.3 per cent, so the entire industry was down on its luck during the quarter.

Of this figure, however, just 90,000 were plug-in hybrids, full electric or fuel cell cars – so-called new energy vehicles (NEVs) – which itself represents a fall of 18 per cent.

Chris Jones, chief analyst for automotive at Canalys, said overall demand for new passenger cars "continues to be weak in the US" and this was "despite a strong economy and low unemployment".

There are circa 300 vehicle models from 40 car brands in the US, "too many" for a "declining passenger car market", the analyst added. "Car-makers must reset their market opportunity expectations and streamline and refresh their vehicle line-ups, retiring unprofitable models."

Jones thinks urbanisation has a role to play as more people move to cities for employment and turn to newer and more affordable solutions to get about: ride hailing and car, bike and scooter sharing rather than being saddled with the expense of "owning an under-utilised car".

Over the three months from July to the end of September, sales of non-commercial small and medium-sized pickup trucks – Trump wagons –SUVs and crossovers all grew but passenger cars declined by 10 per cent.

Of the total market, SUVs accounted for 49 per cent of passenger sales, pick-up trucks were 19 per cent and cars made up the remaining 32 per cent.

The major disappointment in the quarter, said Canalys, was that just 2.14 per cent of all car sales were NEVs. Of this figure – the aforementioned 90,000 units – some 60 per cent were made by Tesla, more than all the competition combined.

Jones said that unlike the mainstream gas-guzzlers, there is a "severe lack of choice when it comes to NEVs in the US". He reckoned deliveries of the Tesla Model 3 have "peaked" yet there is "nothing new from the competition to challenge it".

"This need to change in order to grow the EV charging network, spur demand for zero emission vehicles and, as a result, improve air quality in US cities," he said.

In true salesman fashion, Tesla boss Musk said during its Q3 results call with analysts that he expects the upcoming Model Y crossover – launching next summer – to "outsell the Model S, Model X and Model 3 combined".

Musk was asked by an analyst on the conference call if Tesla will try to create demand by using more than just word of mouth.

"What we are seeing is that word of mouth is more than enough to drive our demand in excess of production. We have no plans to advertise at this time."

The company sells online, has no sales team and no marketing. ®