Like a BAT outta hell, Brave browser hits 1.0 with crypto-coin rewards for your fave websites

Brave, an open-source browser based on the Google Chromium project, is notable for two things. First, it blocks ads, trackers and cross-site cookies by default. This feature is called Shields. An icon in the toolbar tells you how many items are blocked, with numbers in the 30s and 40s common.

If the site is either well-behaved and you want to allow ads to be displayed, or so badly behaved that it does not work with Shields on (and you are desperate to see the content), you can disable Shields for a site by clicking the icon.

The second feature is more radical, and aims to provide an alternative way of funding web publishers via the BAT (Basic Attention Token) cryptocurrency. Users can opt-in to Brave Rewards, which means they see ads in the browser (by default 2 per hour), published by Brave rather than by the sites you visit, for which they earn BATs. You can spend BATs by donating to websites that you like (currently around 300,000 are registered), via an auto-contribute feature, or use them as you wish. BAT is built on the Ethereum platform, and a token currently trades for around $0.25. 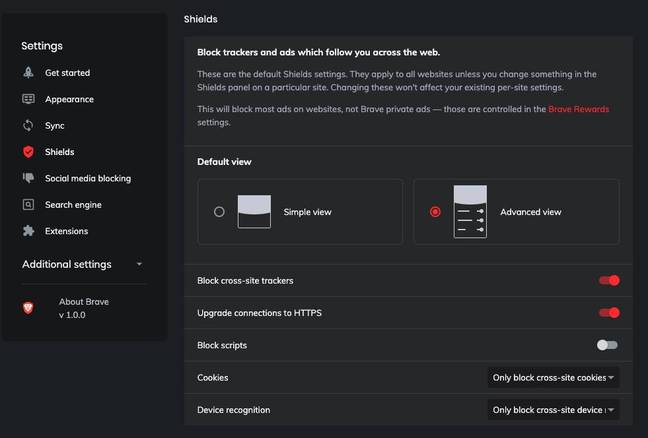 The co-founder of both Brave and BAT is Brendan Eich, an influential figure who invented JavaScript and co-founded Mozilla, but also a controversial one. In 2014, he was forced to resign as Mozilla CEO (after just a short time in the job) because of his views on same-sex marriage.

Eich says in the Brave 1.0 announcement that the industry's fixation on ads, personalisation and data collection "not only violates privacy, but slows down page loads, drains batteries, and makes for a miserable experience".

In his mind, therefore, Brave and BAT go together as one piece, an alternative way to enable income from ads to flow to the web's publishers and content creators – though whether it is viable is unclear.

As a scheme from a browser with a tiny market share (8.7 million active users), Brave Rewards may seem attractive, but the more it grows, the more questions will be asked about whether the practice of blocking everyone else's ads and inserting your own is an ethical alternative.

That said, there is no doubting the essence of Eich's argument, that the unfiltered web is invasive, unpleasant and slow. The company claims that Brave is 3-6 times faster than other browsers. 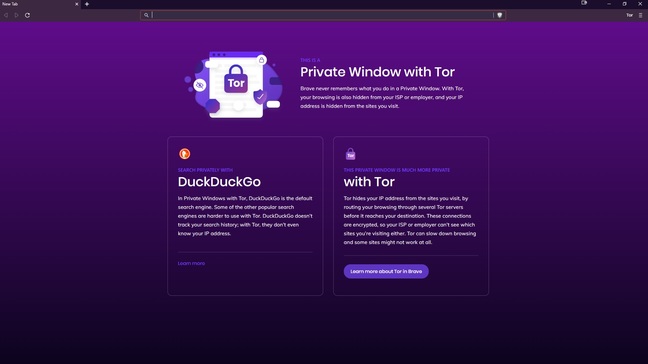 Brave can open tabs with access to the Tor network

Brave has some other unusual features. It includes the ability to access the Tor network via a private tab. It will automatically upgrade an HTTP connect to HTTPS where possible. There is also support for IPFS, a project to decentralise web content in a manner similar to BitTorrent, using peer-to-peer connections. There is also a built-in crypto-wallet for storing any kind of Ethereum asset and dApps smart contracts, also based on Ethereum.

You can get Brave here, though we hit a curious problem where the installer claims it isn't able to connect to the internet and ended up using a standalone installer from the GitHub site here. This page also shows the fixes in the latest release. ®

Surely this is the trick to profitability
Software2 Feb 2023 | 19