BOFH: Trying to go after IT's budget again? 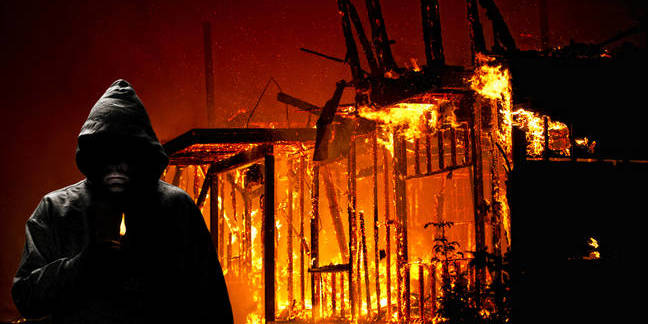 Episode 11 "So let me get this straight," the PFY says, shaking his head a little to clear his thoughts "Global warming is... our fault."

"I didn't say that," the Director blurts. "Anyway, it's called climate change."

"You implied it was our fault," the PFY says.

"You said that the company was committed to offsetting its carbon footprint by making changes in IT."

"So you'll be making changes in places other than IT?"

"So what you're saying is that IT is the only way for the company to address global warming at the moment - which therefore IMPLIES that IT must be to blame?"

"If I might," I say, raising an index finger to interrupt the Director while addressing the PFY, "climate change is increasingly being seen as the result of a flawed business model whereby the impact of a business process on the environment is not directly attributed to the business process and a cost penalty added. In other words, things which could in the past be abused for free are increasingly being factored into the business costs.. The server which consumes 1,200 watts of running power and maybe 1,250 watts of cooling power through some space time anomaly is seen as a global impact of some 2,450 watts of generation which has some carbon impact - depending on the generation involved."

"Yes. And not to mention the cost of manufacturing the server in the first place," the Director says.

"And to address this we are to make changes in the way we use servers to make a positive contribution?" I ask.

"Changes," I add, "which would be dwarfed by those which could be had by, say, reducing the size of engines in corporate vehicles? Or unnecessary corporate air travel?"

"Or removing the bean curry from the lunch menu," the PFY adds.

"I don't know about that but I do know that the company's electricity burden appears to be directly linked to IT."

"Though more linked to desktop IT than server IT," I suggest.

"Desktops are more wasteful than servers," the PFY chips in helpfully. "Servers wind down when they're not in use, whereas desktops only sometimes wind down. An entire processor, fan and power supply is devoted to one user – whereas with a server the load is vastly smaller per use."

"But servers are on all the time!" the Boss says. "Three times as long as a desktop."

"But the servers are used by orders of magnitude more people, so on balance desktops are the high users."

There's no point in arguing with the Boss on this one though, he feels that he's atop some moral high ground and will not budge.

"We're going to offset our carbon by buying carbon credits with our residual IT budget!" he cries happily, "which will make a fantastic piece for our annual report."

"How we wasted money on carbon credits paying someone to plant some trees?"

"I'm not so sure. Buying carbon credits is a bit like a serial killer paying someone else to have kids to make his activity cost neutral."

"What about if we identified a way to prevent some pollution and used that to offset our carbon – so we found a way to make up for it?"

"I'm listening" the Boss says. "So you're proposing to not cause some pollution and use that as an offset?"

"Yes. We don't need to put our money into any overseas collective and at the same time we effectively keep our I.T. Budget in house but achieve the same carbon savings."

"So what pollution were you thinking of preventing?"

"I was thinking of setting the building on fire. So if I don't do that, then it'll save a massive amount of pollution but also we could deal with the whole carbon credit thing in house as it were – win/win!"

"So I'll be paying you not to burn our building down?" the Boss says.

"I'm sure the board will be pleased – particularly if there's a board meeting on at the time. I'm sure that would meet their targets."

"Oh they don't have any targets – this is just one of our initiatives. And I am not going to propose your solution."

"OK, OK – I see that it's a matter of personal importance to you. What about if what I didn't burn was a car?. What if it was your car. What are the credits on not setting that on fire? And if you happened to be in it at the time and all that polyester went up as well... That wouldn't be ecological."

"You would have to ask my defence counsel about that."

"But we have to give a presentation to the board tomorrow!"

"You could always set the building on fire."

The Boss gasps, but I raise a calming hand.

"Nothing excessive, just set fire to a couple of sheets of A4 paper in your office bin just before the meeting, wait for the sensor to trip the alarm, put it out with the extinguisher and then when everyone's back inside say you can't make the meeting because you need to look into some flammable battery issues."

"You think that will work?"

So the Boss wanders off to plan his arson and the status quo has returned to normal.

"Swap the extinguisher outside the Boss's office for the one with petrol in it will you?"

"Or should I use water," the PFY says, "then we could claim those not-burning-the-building-down credits?"