Pics An entomologist in the US claims to have discovered extraterrestrial insects living on Mars after spending years poring over photos of the Red Planet's surface.

“There has been and still is life on Mars,” William Romoser triumphantly declared this week in a statement that was publicly emitted and then, funnily enough, hastily withdrawn by Ohio University, where he is a professor emeritus.

“There is apparent diversity among the Martian insect-like fauna which display many features similar to Terran insects that are interpreted as advanced groups – for example, the presence of wings, wing flexion, agile gliding or flight, and variously structured leg elements.”

To back up these Nobel-Prize-grade discoveries, Romoser brandished photos taken by NASA’s Curiosity rover, photos that have been given an authoritative sheen with Microsoft Paint-level annotations. In among the smudges and shadows were “insect-like forms” lying in the Martian dirt. Or rocks, as they're otherwise technically known. 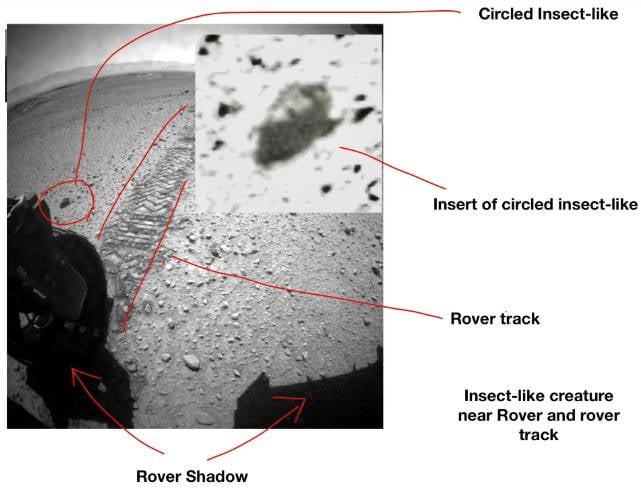 Nothing to see here, just insects on Mars, allegedly ... One of Romoser's breakthroughs. Image credit: Ohio University. Click to enlarge

You may have to squint really hard to see it, or perhaps drop some acid, but Romoser reckons, in the space agency's snaps, there is clearly an outline of a head, leg, abdomen, thorax, and a beady eye. Or a 19th-century locomotive bound for Edinburgh. 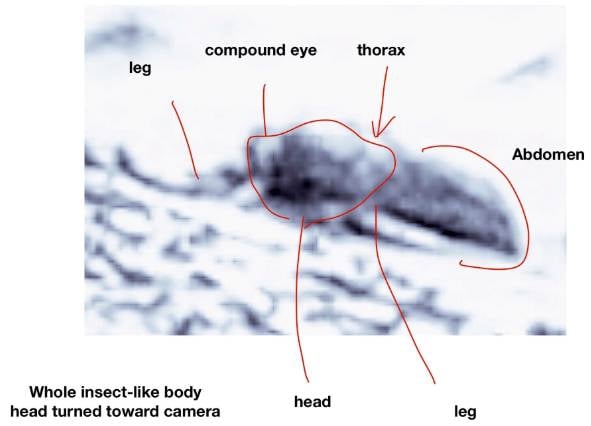 “An exoskeleton and jointed appendages are sufficient to establish identification as an arthropod," the prof beamed.

"Three body regions, a single pair of antennae, and six legs are traditionally sufficient to establish identification as ‘insect’ on Earth. These characteristics should likewise be valid to identify an organism on Mars as insect-like. On these bases, arthropodan, insect-like forms can be seen in the Mars rover photos.”

Obviously, the presence of alien life can’t possibly be deduced by a pile of grainy images alone, and, unfortunately – and this may shock you – that’s all the professor seems to have. And as we said, Ohio Uni quietly removed its press release gushing over Romoser’s work. An official told The Register:

“The faculty member no longer wishes to engage with media regarding this research, so we have opted to remove the story from our website.”

Still, the prof presented his work at the annual meeting of the Entomological Society of America this week. The claims made in his poster for the conference, and accompanying abstract, were a little more subdued.

“While any given image does not in itself prove anything, I believe the mosaic of what I have described is compelling. And as stated above, I view the research reported here to be replicative and corroborative,” he admitted.

All boffins need to do now is, er, look at the images more. “It is very clear that much more study of the photos is needed,” he concluded. ®