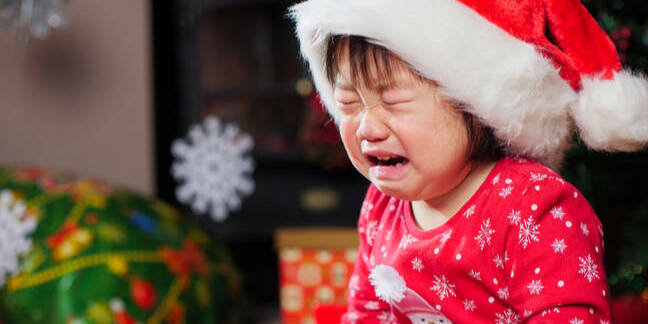 The age-old deception that is Christmas has been unravelled for a bunch of tots in Nottinghamshire after an ill-conceived comment by the Mayor of Rushcliffe.

According to the BBC, Mayor Christine Jeffreys told assembled kiddiwonks at a festive lights switch-on event in West Bridgford on Saturday that "Santa was too busy to visit them" and that "mummy and daddy" would be the ones leaving presents under the tree.

Local mum Nina Hudson took to Facebook with a postmortem rundown of the exact moment the light faded from the children's eyes.

Pointing out that the "audience were all under 10 years old", she said that during her speech the Conservative councillor blurted "that Santa was really busy this year so mum and dad would be helping out by putting all their presents under the tree".

She added that Jeffreys assured the sprogs: "If they hear a noise in the middle of the night on Xmas eve, don't worry it's just 'mummy and daddy'," concluding her post with: "WTF !!!!!??? [string of incensed emojis] I'm traumatised."

Jeffreys said in a statement: "I apologise unreservedly for the upset I have caused to those who attended the lights switch-on.

"Some of my words were said in error.

"I am deeply apologetic to anyone who was affected by what I said."

It is interesting to consider just what the devil was going through the mayor's head, telling a bunch of small children that beloved Saint Nick wouldn't be coming. Bare-faced lies are a critical component in the tool belt of parenthood.

Just this morning, your correspondent marvelled as a two-year-old promptly began brushing his teeth having been told that the Tooth Fairy doesn't like dirty gnashers.

He then asked for some money.

Jeffreys could have thought she was doing the brainwashed hobbits a service. Indeed, the flimsy charade is beset on all sides – mainly from "cooler" kids at school who go around proclaiming that they've all been hoodwinked.

This hack remembers such an incident. After proudly telling my parents that "Santa isn't real", I still burst into tears when I came down in the night to discover that it really was Mum and Dad who were responsible for prepping the swag.

Sorry, misted up there a moment.

Of course, she could have also done it out of pure spite. In any case, Chrimbo is forever changed for the youngsters of West Bridgford, and parents will need another ruse to manipulate their spawn. ®

What a load of bollards! Object of bloke's street furniture romp run over

Talk about making a rod for your own back: Pot dealer's seized €54m Bitcoins up in smoke after keys thrown out with fishing gear