Brian Eno's latest composition: A giant Christmas card with Julian Assange on it

Not 'Music For Extraditions'

At 3pm on 3 December, the background muzak technician will pull the sheets off an oversized digital Christmas card (pictured) outside the Home Office's Westminster premises, featuring a snap of white-haired WikiLeaks founder Julian Assange and emblazoned with the cheery message: "This Christmas journalism is on trial." 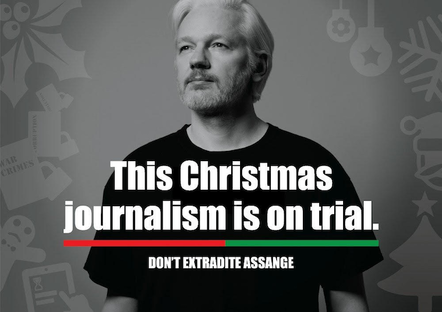 Of course, that depends on semantics.

The United States would argue it's trying to extradite Assange from the UK to face 18 espionage charges related to assisting whistleblower Chelsea Manning exfiltrate classified information, which is a far cry from what we claim to do at The Reg.

Being found guilty could result in a 170-year prison sentence.

Lullaby maestro Eno has long been an outspoken supporter of the leaker-in-chief, often lending his gravitas to calls to free Assange.

At the event, Joe Public will be able to add a personalised message to general pleas not to hand Assange over to the US justice system, which will then flood Priti "Vacant" Patel's inbox.

An electronic version will pummel Home Office email accounts on 19 December, the date of Assange's next court appearance.

Jules is currently serving 11 months in HMP Belmarsh for skipping bail in June 2012 by hiding in the broom cupboard of London's Ecuadorian embassy. This was after losing a Supreme Court challenge to a European arrest warrant ordering his return to Sweden for questioning over rape allegations.

The ruse was up when Ecuador booted him out after getting sick of his poor hygiene and not cleaning up after his cat. The $5m security bill for granting him asylum probably didn't help either.

The rape allegations were last week dropped due to "weakened evidence", according to the Swedish Prosecution Authority, meaning the US could book him on a one-way flight across the Pond.

Assange's extradition hearing is set to take place from 24 February, which he tried and failed to delay.

He started out as synth player in art ponce band Roxy Music to later embark on a solo career churning out albums with such inspiring titles as "Music For Airports".

We can't wait to hear "Music For Extraditions". ®