For the latest in The Register's sporadic series of Windows falling over in strange places, we present UK retailer Asda and its borked Click and Collect "Drive Thru" terminal.

Snapped by friend of El Reg and bearded rust-botherer Andy Hinks during a misguided attempted to collect six months' worth of groceries, the glorious Blue Screen of Death was beaming its cold light over visitors to the Walmart tentacle's Hollingbury branch in the damp city of Brighton.

Because Blade Runner day has now been and gone, and we still can't bark "Enhance" at our laptops, a bit of fiddling with the contrast makes us think this might be Windows 7 vomiting its internals over car drivers. The 0x00000074 fits with the BAD_SYSTEM_CONFIG_INFO, which expects four parameters, the last of which could be 0xC0000102 or STATUS_FILE_CORRUPT_ERROR. 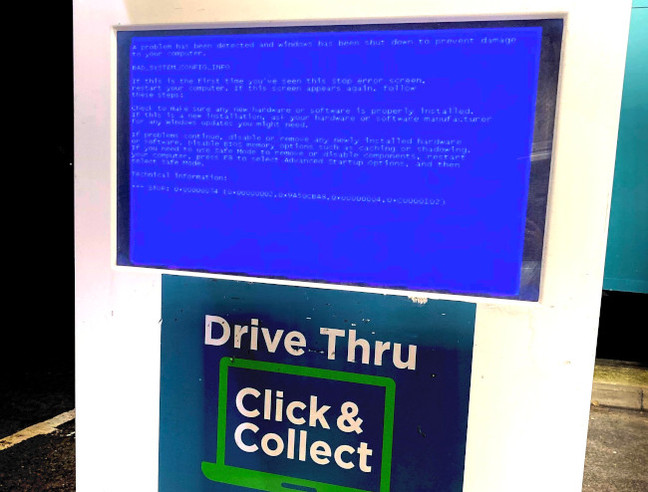 Please use the comments below to work out what the other three parameters might be (if the urge should take you). We gave up, quitters that we are.

Such BSOD displays might soon be a thing of the past, since newer versions of Windows prefer to show a cuddlier face while falling over. Windows 7 is, after all, due to drop out of support next year unless this is a POSReady incarnation or Asda splashes the cash on an extension. Either case could see the OS lingering on a little longer, like the faint odour of cabbage several weeks after overcooking.

Naturally, we contacted Asda to find out what fate had befallen its terminal, but the grocer has yet to respond.

In the meantime, after forlornly pawing at the recalcitrant screen, Mr Hinks will be forced to leave his car and venture indoors to collect his bi-annual haul. Or just find another lane. ®

An Asda spokesperson got in touch with El Reg to say: “Whoops! We're sorry that our Click & Collect at Hollingbury needed a quick reboot, but are pleased to confirm it was up and running again in no time."