You can't leave your hat on

Something for the Weekend, Sir? The customs officer likes my smile. He smiles back.

Phew, another passage through international arrivals achieved without the slightest whiff of latex and talc. Still, these passport checks are getting longer and I don't mean the queueing. I mean the time I have to stand in front of the little booth while a uniformed gent – it's almost never a woman outside the UK, I've noticed – furrows his brow at my passport.

It used to take no more than a few seconds before I'd be waved on. But since I renewed my passport earlier this year I seem to find myself forced to linger for a minute or more.

The routine is invariable too: the customs officer flicks through the passport to check it has the right weight and feel, locates the photo page, looks at my photo and – the best bit – shrugs almost imperceptibly with a suppressed snigger before running it through the scanner. Then the furrowing begins.

Perhaps I'm not on the database. Perhaps it takes longer to locate my ID among all the others – I mean, there must be millions of people with my name in the world. Maybe I look like Jihadi McJihadface. Perhaps my photo looks nothing like me. Perhaps – and this is more likely, I'm told – my photo looks too much like me.

Perhaps electromagnetic waves are interfering with their systems. It's only to be expected because I am effectively deflecting them from my body by carrying one of these magic medallions that I picked up recently at a Health, Well-being and Unscientific Woo event. 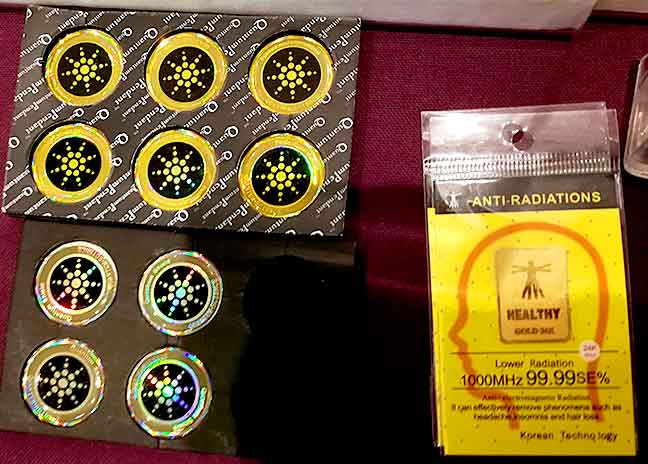 By the way, the "24c gold" badges on the right may offer better protection against the Devil but they cost 18 euros each. Also, the picture on the packaging seems to suggest that you should affix it to the side of your head, which is plainly ridiculous and, who knows, might give other people the extremely unfair impression you were some sort of credulous idiot.

The customs officer's furrowing is supplemented by frowning.

The birds cease singing. Insects fall silent. In the distance, a wolf howls mournfully. A chill wind ripples our collars. The sun turns red. There's a clap of thunder and the drapes of the temple are rent asunder.

At this point, I engage the customs officer with direct eye contact, remove my spectacles, lean forward and smile. And for whatever reason, and without fail, this clears the blockage immediately: the officer's face relaxes, his hand moves gently away from his firearm holster and I am allowed through.

The trick with the specs is something I learnt from using the automated barriers in the Arrivals halls at British airports. They use biometric facial recognition but, I find, don't work until you render yourself temporarily blind. The wearing of glasses (or indeed hats, false moustaches or Ziggy Stardust makeup) in passport photos is forbidden and so the recognition systems struggle if you fail to remove them during checks.

To me, this is no different from refusing to recognise an infirm eldster unless they throw aside their stick and walk, oh yea to the lord. Nope, sorry, I don't recognise that quadruple amputee. Turf him out of his wheelchair so I can get a better look, would you?

Apple's facial recognition doesn't need you to take off your spectacles but that's because the cameras on Apple's phones, tablets and laptops are close enough to your face to reference pinpoints all around your mug in super 3D.

The not-at-all equivalent system on Android phones just uses a flat image of your face to unlock the device, and it's pretty easy to fool. It will unlock my cheapo Huawei Y5 if I hold up a photo of my face in front of the camera, or indeed a photo of someone else who looks very similar, and in some cases not so similar. I flattered myself by testing it successfully with photos of various actors who played James Bond, a photo of Elvis, one of Cliff Richard and so on. To give the Android facial recognition system some credit, I admit it didn't recognise me when I held up a photo of Janet Street-Porter. Or of one of the meerkats from those TV ads.

It does, however, recognise me whether or not I'm wearing a pair of specs – or indeed whether Daniel Craig is wearing his (sadly, not Pierce Brosnan but you can't have everything).

Talking of Elvis, South Wales Police have famously been using AFR (Automated Facial Recognition) to check for naughty people attending Porthcawl's annual Elvis Festival for the last three years in a row. This only stands to reason: you simply can't trust the blue suede bastards. One can only imagine the associated profiling document: Be on the lookout for overweight men with black-dyed hair, making rhythmic hip movements and demonstrating a propensity to say "uh huh".

I suppose if AFR fails to work first time round, the police could ask the suspect to remove his huge sunglasses and try again. Anyway, you can evaluate the performance of South Wales Police's AFR blitz at this year's Elvis Festival for yourself here [PDF]. I'm sure you will agree it was an outstanding success.

What I'm probably looking for is a happy medium between Apple's system, which requires the camera to be no further than 18in from your face, and a classic AFR-style system that tries to make sense of flat image captures. Then I want it taken off the streets of Porthcawl and installed in airports instead.

Better still, they could install it in hospitals, offices and blocks of flats to work with electronic door locks. Me, I'd get the postie biometricised so he or she could deliver the mail without buzzing every flat in turn until someone releases the main entry door. This is better than a code or a keyfob as your 3D face can't easily be shared with thieving bastards nor duplicated down at Mr Minit.

There's a notorious story here in France from a few years back involving a man having a heart attack at home. An ambulance was called which duly tore its way through the traffic to arrive at the apartment block within just a few minutes. It then took the paramedics another quarter of an hour to make their way from the building's main entrance to the flat in question, as they were expected to enter an unknown security passcode at the street-level front door, another to call the lift, yet another inside the lift to make it work, one more to enter the corridor where the flat was situated, and of course one to get inside the property.

OK, it's overkill (excuse the metaphor) to expect paramedics to hand over their biometric IDs to landlords and building managers. But surely something for the public good could come out of facial recognition.

Besides rounding up all those wicked Welsh Elvises, of course.

Alistair Dabbs is a freelance technology tart, juggling tech journalism, training and digital publishing. He has no strong opinions on CCTV, AFR and other such invasions of privacy in public spaces. What he finds objectionable is the way such data risks being subsequently misused, shared, lost, inaccurately tagged and secretly archived. @alidabbs

PS: Dabbsy is taking a break for Saturnalia but will meet you back here for one more SFTW at Christmas and again for the New Year. ®