The Register got its talons on Lenovo's monster monitor, the 43.4-inch ThinkVision P44W-10 curved display. Was it worth the desk space?

There is a scene in the 1986 movie Ruthless People where an impossibly young Judge Reinhold attempts to flog a set of gigantic speakers to a gullible music fan. The Dominator MX, enthused Reinhold, was so epic that "when you die, they can bury you in it!"

It is fair to say that similar excitement gripped Vulture Central as we pondered the gigantic cardboard box from Lenovo, which fully occupied one of the desks provided by our WeWork landlords. 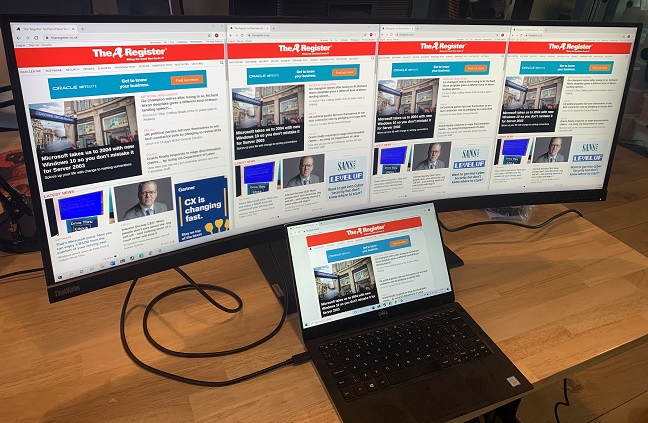 Extracting the thing proved relatively straightforward, once one had battled through the mountains of packaging. The stand – which allows the screen to be tilted, swivelled, raised and lowered – clipped easily to the back of the screen and the hefty metal base screwed into place. No tools were needed and it took us longer to work out how to pull the screen from the box than actually assemble it.

Lenovo provides HDMI, DisplayPort and USB-C cables (as it should, considering the £1,549.99 price tag), and after tentatively plugging the thing into a USB-C socket of a recent-ish Dell XPS 13, we fired up the behemoth.

A slim bezel around the edges, and a slightly thicker one at the base, makes for a total viewable size of 43.4 inches and the technology behind the thing is a good old-fashioned LED backlit LCD panel.

It naturally has ports aplenty, with a DisplayPort 1.4 socket, a pair of HDMI 2.0 inputs and two USB 3.1 Type-C connectors; one Gen2 (DisplayPort 1.4) and the other Gen1 (DisplayPort 1.2). If plugged into a handy USB socket, the thing can also be a four-port USB 3.1 hub.

It's a bright beast, too, hitting 450 nits at its peak. The brightness of the panel is, however, impressively even over the curved, anti-glare screen.

A PIP mode can take two inputs to create illusion of two 24-inch 16:10 monitors, allowing a user to attach two feeds. We, however, spent most of our time revelling in the glory that was the full 43.4 inches.

A colour calibration report comes in the box, and Lenovo makes much of the pre-calibrated colour accuracy of the thing, and there is also the ThinkColor software for the tweakers.

In use, the screen is bright, with a crisp, stable image. The 144Hz will appeal to gamers, particularly those with graphics cards that support AMD's FreeSync, and the 1800R curved panel is considerably more pleasing on the eye that a pair of 24-inch monitors side-by-side.

That, however, is the question. A quick look around online retailers will turn up any number of impressively specified 24-inch screens for considerably less than half the price of this mega monitor and for most productivity tasks, two screens would do the job (albeit with more cable faff).

Although the wide expanse of screen is certainly enticing, and the curve is easier on the eye when flicking from side to side. Gamers will also appreciate the width on offer, assuming they have the hardware to support it. Vulture Central's resident joystick-fiddler runs Red Dead Redemption 2 at 1080p settings and we suspect that getting things up and running to a similar quality with his i7-4790K and RTX 2080 rig would be a challenge.

Price-conscious buyers will be put off by the premium for the panel width, but well-heeled creatives and traders could do a lot worse if they have a 43.4-inch hole to fill in their lives.