Battery-guzzling 4K hardware clad in an alloy battle jacket: Lenovo's 4th-gen ThinkPad Yoga X1 is its most metal yet

High-rez screen or going all day without a charge: Pick one

The fourth-generation ThinkPad Yoga X1 has swapped the finish of yesteryear for something a little more metallic.

Lenovo's new flagship 2-in-1 came as a bit of a shock after the sleek Carbon X1. Starting at 1.35kg, it's a heftier beast (something I certainly noticed in a shoulder bag) and the metal finish seemed a tad less luxurious than its sibling.

However, the "Iron Gray" aluminium chassis was a good deal more resilient to scuffs and marks during a week of everyday usage.

The ThinkPad Yoga's looks have had an update this time around, as well as general slimming down. It's a fraction lighter than the last gen and slightly smaller at 323mm x 218mm x 15.5mm. 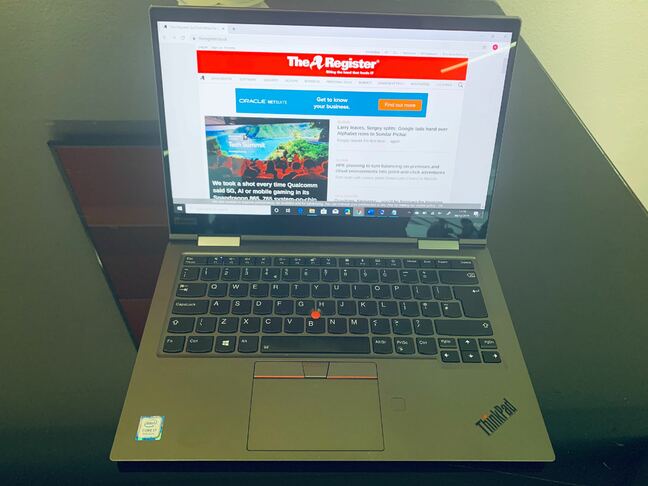 The device is certainly not gargantuan but, compared to the X1 Carbon, it is a tad chunky. Sadly, the extra weight does not translate to a screen that can be opened with one finger either.

The ports have also had a refresh, and fans of the previous generation will be sad to see the departure of the SD card reader. Still, an HDMI 1.4 connector, two USB-C Thunderbolt 3 and a pair of USB-A 3.1 sockets should be enough to be going on with. Lenovo also supplies an Ethernet adapter for those who need it.

There is also a combination mic and headphone socket.

The customary trackpad and ThinkPad pointer are present and correct and the backlit keyboard, irritating function key placement aside, remains a highlight of the line, just like its X1 Carbon sibling.

Also like the Carbon, the fingerprint reader works a treat while the Windows Hello facial recognition remains distinctly inferior to alternative technologies. Again, this isn't really the fault of Lenovo, and the inclusion of that reader is laudable.

A fiddly switch is present to slide a shutter over the camera and is a little tricky to find on the glossy screen bezel. The screen, however, is sumptuous.

The party piece of the model we had was the 14" 4K (3840 x 2160) IPS display with Dolby Vision HDR400 and 500 nits. While the weedy Intel 620 graphics won't see any modern games being played, the screen itself is very pleasing to the eye. Video was a treat, and using the trick hinge to pop the machine into media-viewing mode made for some enjoyable bingeing while the battery lasted. 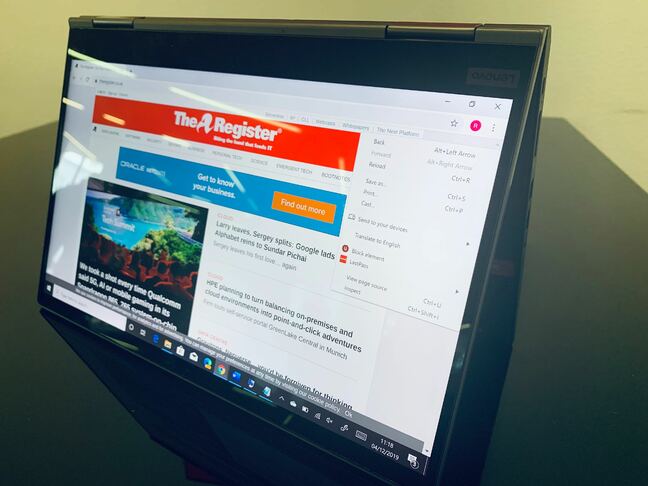 Fold the screen all the way around, and the machine switches to tablet mode. Sadly, the Yoga felt just a bit too heavy for our weak little wrists when used in this way and we had some problems with the pen (which slots into the chassis when not in use).

When compared to something like the Surface Go with Microsoft's own pen, the Yoga felt a little laggy during note-taking in OneNote. The pen also felt plasticky, and like it might be scratching the screen, which is a shame in such a premium device.

The review model we had suffered no performance problems, with the Intel i7-8565U CPU chewing through any task that was thrown its way. The 16GB of LPDDR3 RAM and 512GB SSD do no harm either and are reminiscent of the Carbon X1.

In fact, it is hard to avoid comparisons between the two. Like its stablemate, the Yoga X1 had no problems with video encoding, running the likes of Visual Studio along with multiple virtual machines. It also kept its cool until we ramped up the performance slider, at which point the fan span up under load.

It fared less well when plugged into Lenovo's monster 43.4 inch monitor we looked at earlier this week, with the fan dumping a considerable amount of heat out of the side vent when running on mains power.

This brings us to the machine's Achilles heel – the battery life. Obviously, we were never going to see anything like Lenovo's claim of "up to 18 hours". The company is clear that the figure depends on settings, usage and configuration. Ramp up the spec and add in that glorious screen and you'll be lucky to see a working day out of the 51Whr battery.

The previous generation had a 57Whr unit fitted.

In fact, during our first test run, which was simply performing productivity tasks (such as word processing) and allowing Lenovo's defaults to do their stuff, we struggled to see more than a catastrophic four hours out of the machine.

Manually switching everything to full power-sipping mode extended the life during regular usage to a shade under six hours, which isn't too bad when one considers that 4K screen, but we wouldn't want to travel without the charger.

We asked Lenovo if there could be an issue with our review model with regard to battery usage and the screen lag but have yet to receive a response.

Is it any good?

While the screen and performance are excellent, anyone thinking of dropping nearly £2k on one should consider the cost of that display in terms of power consumption. A lower-resolution unit will last considerably longer.

Having spent a week in the company of the Yoga, we can see that trick hinge rarely being used and the machine doing most of its duty as a traditional clam shell. However, it's a nice to have for presentations and the odd toe dip into the cream of the streams.

Overall, the revised chassis is a welcome update to the ThinkPad Yoga, as is the option of the 4K screen. It might be built like a tank, but its high price means that alternatives such as Dell's 2-in-1 XPS range are also worthy of attention. ®