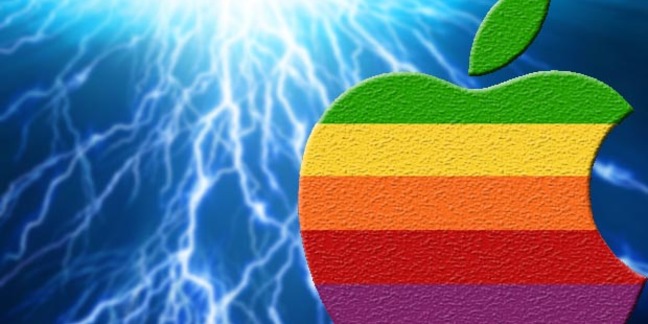 B.ICONIC, the parent of one of Ireland's largest Apple Premium Resellers (APRs), is buying Stormfront – the UK Apple retailer that is, rather than the Aryan social network.

The Irish group owns Compu b, which operates Apple stores across the Emerald Isle, as well as a concession in London's Selfridges, along with a trio of Bang & Olufsen outlets and electronics distie Blink 24.

Mac supremacists Stormfront have ballooned since we first reported on their annexation of the people's homeland of Maidstone back in 2008.

Stormfront now has 23 shops around the country making it the UK’s biggest APR. It flogs and fixes Mac gear, and employs over 300 staff. Why on God's green earth they chose such a name is not clear and never has been.

No value was put on the deal but Stormfront promises to add €60m a year to B.ICONIC revenues. In the year ended 30 September 2018, Stormfront hauled in £57.229m in sales, pretty much flat with the prior year when it felt the impact of Apple's post-Brexit price rises. Stormfront cut its cloth accordingly and returned to the black in 2018 with profits of £214k.

B.ICONIC chief exec Ciaran McCormack said in a statement: "This is a landmark acquisition for the B.ICONIC Group. The UK is an important market for our business, and this deal allows us to grow our presence significantly in this market. Stormfront complements our existing Apple Premium Reseller, business-to-business and education technology offering in the UK and Ireland, expanding our opportunities and supporting the delivery of our strategic growth plan for our business."

Irish-owned and headquartered B.ICONIC describes itself as a high-end fashion technology group.

The sale represents more change for Apple's channel following the collapse of Solutions Inc earlier this year, which was exclusively revealed by The Reg. ®