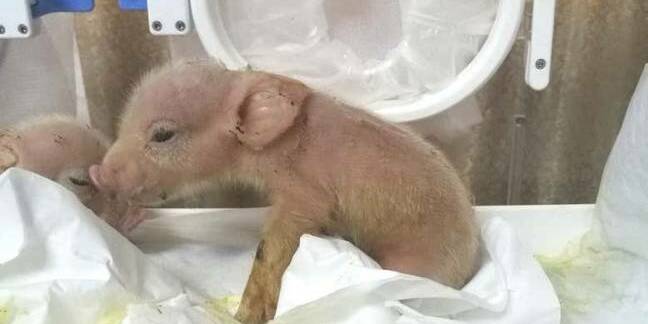 Scientists in China are laying claim to the first ever pig-monkey chimeras to be born in what they hope will be a breakthrough for biomedicine, not just fuel for your nightmares.

The apparent advancement, made by boffins at the Beijing State Key Laboratory of Stem Cell and Reproductive Biology, saw the live piglets born with cells derived from monkeys. The pigs retained their porcine features but internally they were different from the standard bacon-to-be model.

“This is the first report of full-term pig-monkey chimeras,” said Dr Tang Hai at the State Key Laboratory.

According to the New Scientist, the scientists created the chimeras by injecting 4,000 five-day-old pig embryos with cynomolgus monkey (aka the crab-eating macaque) cells that had been modified to produce a fluorescent protein. Only ten of the porkers made it to term, it is claimed: two modified hogs and eight normal animals.

The pigs did not survive long, however, and the pair of monkey-infused piglets – along with their eight non-chimera litter mates – all died within a week. It is thought that the premature death of the animals was not due to being chimeras, but rather complications from the IVF process.

Monkey cells were later found, it is claimed, in the chimeras' various organs, including the heart, liver, lungs, and spleen, albeit in extremely small numbers – between one in 1000 and one in 10,000 cells. This indicates that the cells were able to be generated during the embryonic development, but raises questions about the overall efficacy of the technique.

“Given the extremely low chimeric efficiency and the deaths of all the animals, I actually see this as fairly discouraging,” said stem cell biologist Paul Knoepfler at the University of California, Davis.

The experiments mark the first time scientists have been able to successfully develop pigs with monkey cells and carry them to birth. Typically, chimera experiments have been limited to rodents.

The ultimate goal of the experiments is not to create a race of hideous super-monsters, but rather to figure out if it will be possible to develop human organs inside pigs that could then be harvested and used for transplants.

In the shorter term, the eggheads have said they will be attempting to produce pigs with higher concentrations of the monkey cells in their organs. ®