Cisco has launched a single chip architecture that it claims will work well in network routing and switching gear, and manage data better than existing processors in both categories.

At an event in San Francisco it called “Internet for the Future,” Cisco’s CEO Chuck Robbins said the new design – which the US tech giant is calling Silicon One – has taken five years and just shy of one billion dollars to develop but that it represents a big leap forward in internet technology.

The equipment that makes up the backbone of the internet uses a substantial range of custom processor designs, off-the-shelf parts, and optimized accelerator engines due to the widely different tasks each system undertakes: chips for routing gear, for example, are, generally speaking, hefty beasts with large feature sets, whereas switching chips are typically simpler and there to just shuttle data as fast as possible.

Unfortunately, while this means the hardware usually is tailored to the application, these various different designs mean different software, and that creates a degree of complexity and maintenance burdens that Robbins noted was inefficient. “For every dollar spent on a piece of equipment, you spent $15 operating it over the course of its lifetime,” he claimed. Putting everything on one unified architecture simplifies firmware and application codebases, and, he opined, streamlines operations and reduces the cost.

Sure, we'll believe it when we see it, you may think. And as such, a series of Cisco execs were wheeled out to explain that, while they were aware people would be skeptical, they had actually apparently cracked this nut. The nut being a single architecture that can replace the myriad specialized and highly tuned silicon used in today's network kit.

David Goeckeler, general manager of Cisco's networking and security business, admitted “most people believe this is impossible, including lots of people in our own organization,” and he noted that there was little real advantage to a single silicon architecture if it ended up being inferior to more specialist designs.

SVP of silicon engineering Eyal Dagan claimed Cisco had managed to do just that, and claimed a 10-20 per cent efficiency improvement in switching chips using the new Silicon One setup over the current hardware on the market.

The new design will double the bandwidth and triple the packets-per-second and "break the 10Tbps barrier" – that’s terabits per second, so fast, he said.

Separately, analyst Patrick Moorhead, of Moor Insights and Strategy, told us: "This is one of Cisco's biggest announcements in the last five years.

"I see this potentially solving many customer problems through custom ASIC silicon as it's one architecture for many networking use cases which translates to a focused software platform, not three or four. Cisco will have to prove this one silicon architecture can scale up and down ... It will likely provide problems for Broadcom, Arista and Juniper who operate in this space with networking gear and ASIC chips."

What does this mean in the real world? Cisco says it has a new series of routers – the Cisco 8000 – that are ready to go using the new design and, combined with a corresponding new operating system IOS XR7, will be the internet’s new backbone “for the next couple of decades.”

That’s a pretty bold claim. But with the amount of data in use continuing to skyrocket – thanks to high-definition streaming video, surveillance capitalism, and upcoming 5G and IoT technologies – if Cisco can do what it says it can, then it is all too possible that companies will rush to install its new products. And if it can indeed run all networking equipment off the same architecture without a loss in performance, well then that would be something.

Still skeptical? So is the market. Despite Cisco doing its best to paint itself as the dominant force in a next-generation internet for the next few decades, its share price barely budged this morning: up less than half a per cent.

That may have something to do with the fact that, despite one Cisco exec claiming that someone has insisted one its chip’s metrics had to be a typo, the first gen Q100 chip of its new Silicon One architecture offers an impressive 10.8Tbps. But rival Broadcom’s Tomahawk3 chip – announced two years ago – for example offers speeds up to 12.8Tbps.

Switchzilla's claimed efficiency increases also line up with similar boasts made by other rivals, so Cisco may not have the performance jump it claims. What it does have a single architecture that it says suffers no performance drop and a broad range of products.

Cisco is clearly hoping to get the big players to go all-in on its plans. The launch was held with a select group of the world’s largest internet backbone users and execs from Facebook, Google, AT&T, CenturyLink, Comcast, Microsoft and Disney were all scheduled to talk.

Indeed, Cisco hopes to sell its unified chips to these sorts of hyperscalers and other cloudy giants. Microsoft and Facebook say they are already using the processors in production.

It sounds a lot more exciting than it was, as epitomized by Cisco's GM of service provider networking Jonathan Davidson trying to work up enthusiasm in the room by bellowing: “OK, let’s take the... box... out of the... box.” And if you wondered what happens to you if you spend too much time with routers and switches, he then urged the crowd to go to the display area and take a selfie with the new Cisco 8000 Series which look like... grey boxes. 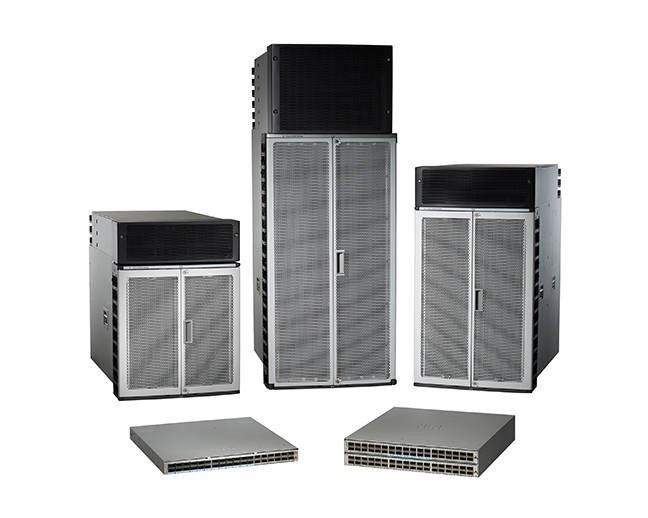 Nobody knows how to party harder than Cisco. ®

Speaking of data-center gear... Our sister site The Next Platform has taken a look at Marvell's Arm-compatible ThunderX3 server processor and its family, and Broadcom's just-launched Tomahawk4 switch chip.