A new feature in Google's Chrome browser will warn you if your username and password matches a known combination in a security breach every time you type credentials into any website.

This credential check is "gradually rolling out for everyone signed into Chrome" as part of the Safe Browsing option, according to the announcement.

The potential worry here is that sending your credentials to Google for checking could itself be a security risk. The technology used was announced nine months ago, when the Password Checkup extension was introduced. At the time it was described as an "early experiment". The way it works is as follows: 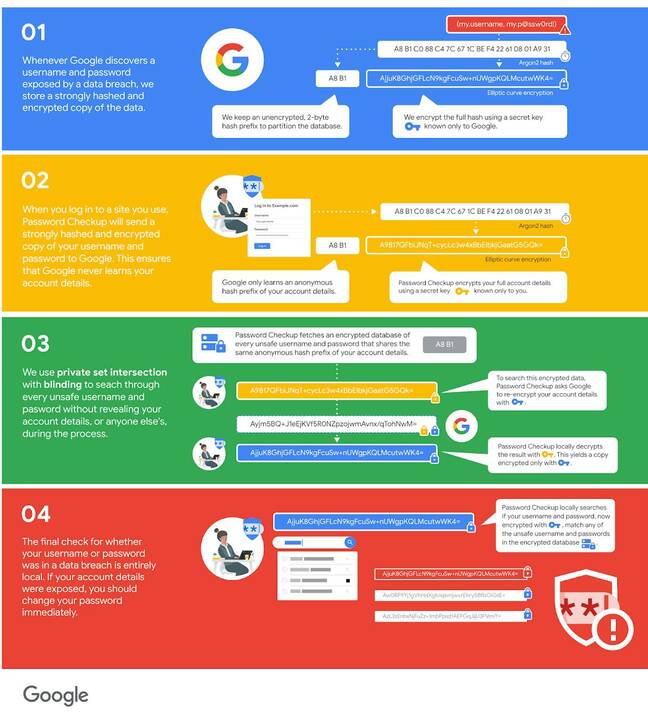 Even though users may still feel uncomfortable enabling this kind of check, the risks are likely lower than that of being unaware that your credentials have been stolen. The bigger snag, perhaps, is that you have to sign into Chrome with all that implies in terms of giving the data-grabbing giant more information about your digital life.

In addition, Google says it is improving its phishing site protection, with 30 per cent more cases being spotted. A further protection is that if you use Chrome's password manager, you will be alerted if you enter credentials stored there into a suspected phishing site.

What about if someone else signs into Chrome on a shared computer, and you inadvertently save your password into someone else's profile? If this can happen you probably already have some potential security issues to worry about, but Google is trying to make it less likely by a more prominent indication of the current profile. ®