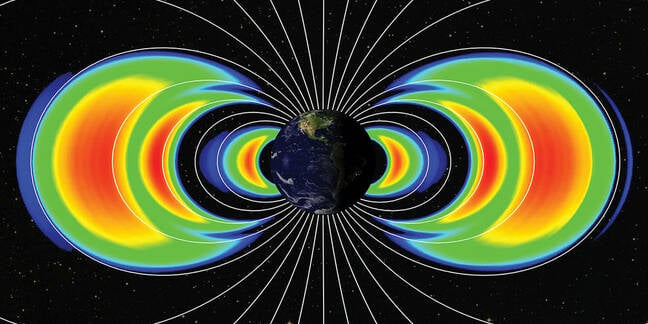 Scientists have discovered a dangerous hotspot in Earth’s Van Allen radiation belts that spews so-called “killer electrons” that can knacker satellites and spacecraft.

Our home world is surrounded by two donut-shaped Van Allen radiation belts teeming with electrically charged particles. The inner belt stretches from 400 to 6,000 miles above our planet’s surface, and the outer one ranges from 8,400 to 36,000 miles out.

The electrons and protons in the belts are tiny in size, though they pack a sizable punch as they zoom around close to the speed of light. Any satellites that fly through the belts are pelted by the particles, which can damage any on-board electrical equipment, such as sensors and cameras.

Killer electrons in these belts pose an even greater risk: their energies run up to millions of electron volts, which can completely frazzle or kill passing spacecraft.

Now, physicists led by boffins at Nagoya University, Japan, have homed in on one region in particular of the belts that produces these killer electrons.

“An important topic in space weather science is understanding the dynamics of killer electrons in the Van Allen radiation belt," Yoshizumi Miyoshi, a professor at the Institute for Space-Earth Environmental Research at Nagoya University, said this week. "The results of this study will improve the modelling and lead to more accurate forecasting of killer electrons in Van Allen radiation belts."

The eggheads found this killer-electron hotspot by analyzing readings from the Japan Aerospace Exploration Agency's Arase satellite and NASA’s Van Allen Probes. This hotspot pumps out accelerated electron fluxes with energies from 500,000 to 2 million electron volts, according to a paper published in Geophysical Research Letters.

Scientists believe these killer electrons are hopped up after interacting with ultra-low-frequency plasma waves. The paper supports that idea. The Van Allen Probes detected signs that electrons were, indeed, interacting with these ultralow frequency waves on one side of the outer belt, which contained the hotspot area. The other side of the belt without the hotspot, however, contained none of these ultralow frequency plasma waves.

By mapping the location of these killer-electron hotspots, boffins can avoid sending spacecraft through those treacherous environments.

A previous study confirmed a 60-year-old theory that the energetic protons and electrons whizzing around the belts were the result of atoms being zapped with cosmic rays. The Earth’s magnetic field traps these charged particles into two concentrated regions to form the above-mentioned Van Allen belts. Human activity, such as nuclear tests, can also create artificial Van Allen belts that can last weeks or years around Earth too. ®