According to a sizeable group of coders who responded to a new State of JavaScript survey, the React framework is not only the most used front-end framework, it also has the highest satisfaction rating.

Survey authors Sacha Greif and Raphaël Benitte persuaded 21,717 developers to contribute to the study, reached via social media, email and word of mouth. Over 86 per cent have been writing JavaScript for two years or more (some more than 20 years), and it looks reasonable as a snapshot of professional opinion.

So what are the trends? The pre-eminence of React is no surprise, but perhaps more notable is the growing interest in Svelte, which "runs at build time, converting your components into highly efficient imperative code that surgically updates the DOM," according to the post introducing version 3. Svelte is top in the survey for “interest” and neck-and-neck with React for "satisfaction". It's worth a look. 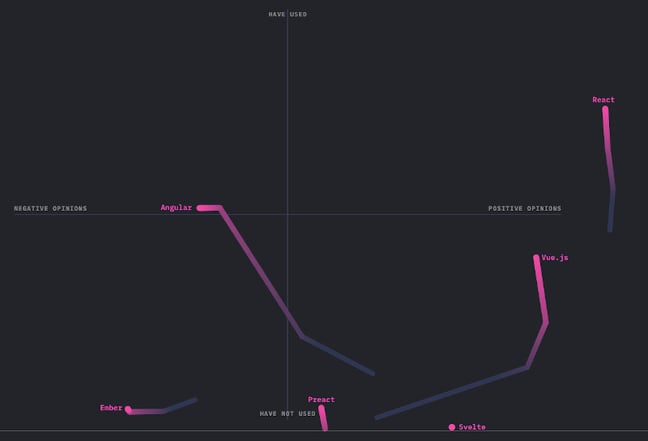 Shooting stars: the decline of Angular and rise of React

The news is not so good for Angular, once the rising star of JavaScript frameworks, but now in decline, which scored a satisfaction ranking of just 38 per cent. An elegant animated chart in the survey makes the point nicely (click the Front End button).

The same chart illustrates the rise of the Jest JavaScript testing framework (click the Testing button), with an impressive 96 per cent satisfaction ranking, placing it well ahead of Mocha.

JavaScript devs are also enjoying graphql more than Redux for the data layer, and Express ahead of Next.js for the back end.

Some older technology is falling out of favour. One example is Apache Cordova (formerly PhoneGap), ground-breaking in its heyday, which lets you compile JavaScript and HTML into a cross-platform mobile application. Satisfaction has fallen to 28 per cent, down from 58 per cent in 2016, and it is React Native and Electron which compete for first place when it comes to building mobile and desktop applications with JavaScript.

The jQuery library, once used by almost everyone, is now in regular use by just 11.2 per cent of respondents. Top choices for utility libraries are now Lodash and Moment.

Visual Studio Code is the top choice for text editor, with JetBrains products WebStorm, IntelliJ and PHPStorm also popular. The primary web browser in use is Google Chrome (60 per cent) but Firefox at 28.8 per cent scores much higher than its share among the general population (under 10 per cent). There is also notable interest in Brave.

But what do you really think?

Turn to the Opinions section, and we find some support for the idea that JavaScript is "overly complex". 31.4 per cent agree and 28.3 per cent are neutral on the subject. Bearing in mind that these are the professionals, that is notable, though it no doubt refers to the whole ecosystem of frameworks, libraries and tools, rather than the language itself.

What is JavaScript for? As far as this group is concerned, 68.3 per cent agree would like it to be their main programming language (and perhaps for many of them, it is). JavaScript, we remind ourselves, was invented by Brendan Eich at Netscape in 1995, where it was originally called LiveScript and intended to be a glue language for Java applets and other web components. It has come a long way since.

The survey is nicely presented and all the code is on GitHub – which illustrates another point, that almost all the technology mentioned above is open source. This stuff may be too complex, but it is also collaborative and free to use. ®