I caught Disco Elysium fever. No, not the Saturday Night kind. I was really quite poorly

The RPG Greetings, traveller, and welcome back to The Register Plays Games, our monthly gaming column. Happy birthday to me and merry Winterfest to you, gamers of the world moonlighting as IT pros. And let's not forget to have a bountiful New Year. It's been an absolute blast writing this thing for the past eight months, so thanks for reading. We round out 2019 with a look at one of its big success stories – Disco Elysium.

For all the big-budget titles of 2019 – the Jedi: Fallen Orders, Death Strandings, Modern Warfares and Sekiros – it was a comparatively left-field oddity that struck gold at the year's Game Awards a couple of weeks ago. But it's not because Disco Elysium took home gongs for best Fresh Indie, RPG, Independent Game and Narrative that we took the plunge in this merriest of months.

Red Dead Redemption 2 on PC: Howdy buck do you get a solid 60FPS in Rockstar's masterpiece?

Released in October when we were knee-deep in The Outer Worlds, it had been on our radar a while and was even suggested as something to check out by Reg readers. I mean, it's called Disco Elysium, for heaven's sake. A dorky name and the promise of a text-heavy, skill-checky, police detective roleplaying game/existential crisis simulator was enough to make me eager to test the waters.

So what's a Disco Elysium then? Well, I'm still not entirely sure what happened and I completed the damn thing in about 50 hours. It plays like a fever dream – apt because that's precisely what the player finds themselves waking up from in the game's opening moments.

Less than an hour later, I had already punched a speed-addled 12-year-old in the face and got a game over screen because my character decided he was a useless sack of shit. 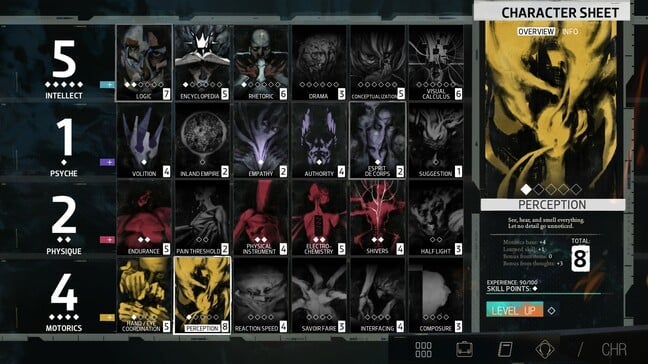 Skills don't make much sense at first, but you get a feel for what they do and what's most useful over time

A couple of days after finishing it, I actually fell terribly ill myself (kids are disgusting disease magnets) and had a fever dream about playing Disco Elysium and writing this article. Which was nice. I'll try to keep things a touch more lucid than that gonzo 40°C-induced brain fart. Not through choice, mind, but because all that delirious raving has been sadly purged from memory.

What's left of your mind will be bombarded by checks testing these areas during conversations and interactions. You can temporarily raise them through drug and alcohol usage, but with a penalty to your health and morale. Some do rather strange things.

Once you have selected or created a "play style" of sorts from a character sheet with biases in intellect, psyche or physique, you begin your adventure bathed in the soggy, stinking darkness of the mother of all hangovers, splayed out on the floor of a trashed hotel room with your ancient reptilian brain – a terrifying disembodied cockney growl – and limbic system – a simpering, snake-tongued spectre – whispering riddles in your ear, urging you not to get up. You do, however, because there's a game to be played.

That's pretty weird straight off the bat, but your various mental faculties interjecting during conversations and observations is a central theme of the game and they form a colourful cast of secondary characters as things progress. You get used to it.

Because you quickly discover that your mind is completely, utterly, irreversibly shattered. Not only do you not know where you are, you know nothing about the world you supposedly live in. You've forgotten your name too – an absolute train wreck of a human. A quick chat with a fellow lodger establishes that you are a cop, allegedly, here to solve a murder. The hijinks of the night before were clearly a desperate attempt to forget something, in which case: mission accomplished. Fortunately, you are blessed with the presence of a fellow detective, the effortlessly cool and straight-laced Kim Kitsuragi, who will help you make sense of your shared predicament one withering sigh at a time. 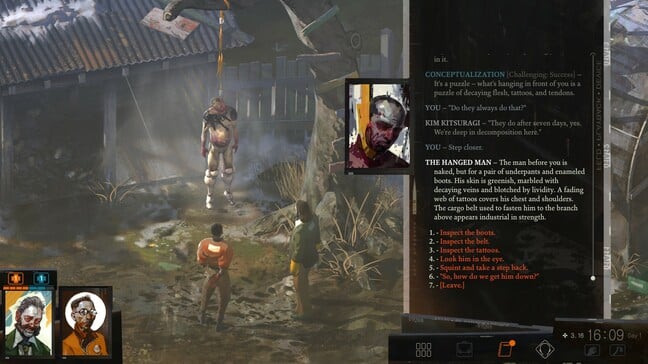 Who killed him? And how did he die? It's your job to find out, hangovers be damned

This struck me as a cool way to start a game. Rather than heading out as someone already au fait with society and its norms, your character is hopelessly lost and so are you. Disco Elysium does a fine job of world building through your interactions with those who live there, the cliff notes being: You are a citizen of Revachol, once the capital of the world until the decadent, long-reigning suzerainty was deposed as part of a global communist uprising 50 years earlier. The following regime was short lived as the other world powers didn't like what was going on and, having quelled their own rebellions, bombed the city, turfing out the communist leadership and making Revachol a Special Administrative Region. The game takes place in the borough of Martinaise, which bore the brunt of the war and still has the scars to show for it. 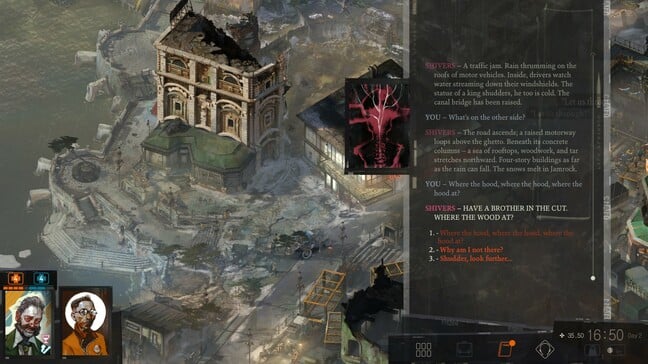 The Shivers skill, in which the city speaks to you, treated us to some DMX

There's a lot more to it than that, of course, and it may come as no surprise that Disco Elysium's setting was initially conceived as a basis for a tabletop RPG campaign. Lead designer Robert Kurvitz, really a writer first and foremost, founded ZA/UM (based in Brighton, UK) to bring the world of Elysium to life, but it was first presented publicly in Kurvitz's second novel, Sacred and Terrible Air, written in his native Estonian and tentatively slated for an English translation next year. 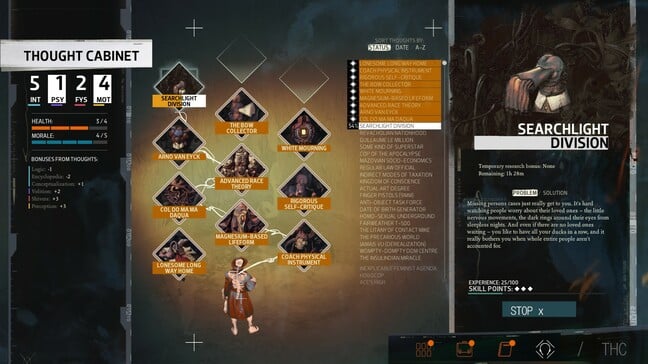 At this stage, you may be wondering: "Gawd, this isn't a 'political' game, is it?" And I'd have to say, yeah, sorry, it is a bit. If Revachol's history wasn't enough of a pointer, Disco Elysium's lefty slant is tellingly illustrated by your dealings with unions and striking workers, and their deeper conflicts with corporate behemoths from overseas. However, your brain will perk up when you make a statement that seems to declare your political leanings, accusing you of being a commie, fascist, neoliberal or the world's most laughable centrist. You may even unlock a "thought" in the Lovecraftian "Thought Cabinet" for doing so, a system through which you can "internalize" a concept over time to achieve stat bonuses. 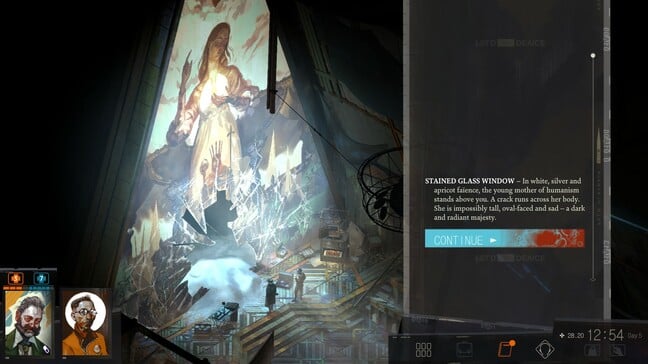 There are some beautiful environments in Disco Elysium

You can run firmly with a single ideology if you wish, or you can play them all. Note that a lot of Steam achievements depend on saying, for example, "traditionalist" things or employing "critical theory" a certain amount of times. As I'm an achievement whore, I just said whatever necessary in order to get them and it wasn't clear what, if any, chaos that sowed. Though Revachol is most definitely not on Earth, Elysium shares the exact same ideological flashpoints that we do as 2019 turns into 2020. 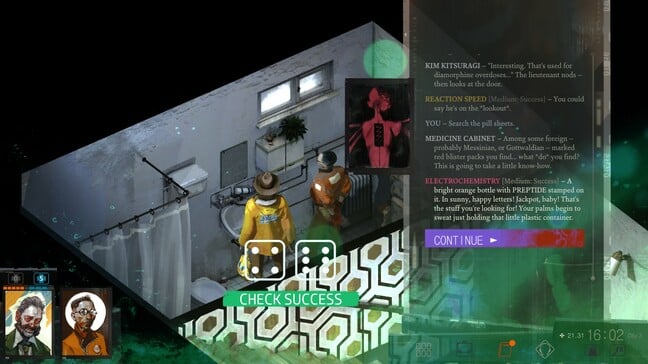 How a successful skill check will appear

Does it truly belong in Time Magazine's best games of the last 10 years? I'm not convinced. Where was The Witcher 3, a flawless masterpiece, in that list? There are a lot of things that should have been mightily improved upon in Disco Elysium. 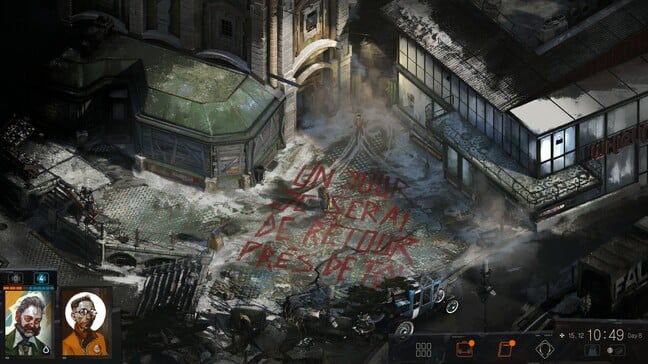 'ONE DAY I WILL RETURN TO YOUR SIDE'

First of all, for a game that is as much a "visual novel" as an RPG, where the majority of the "action" takes place in dialogue boxes, the text needs to be watertight. Disco Elysium is littered – littered – with typos, missing words, shonky punctuation and the like. I started taking screenshots when I spotted them, but there were too many to bother continuing. Now, maybe people don't care about correct spelling so much these days. As an editor by trade, however, I do. Though the sometimes self-indulgent prose is evocative in the right ways, measly errors shattered any sense of immersion I was clinging to during the lengthier conversations. If any of the developers ever read this, email me and we can discuss rates. 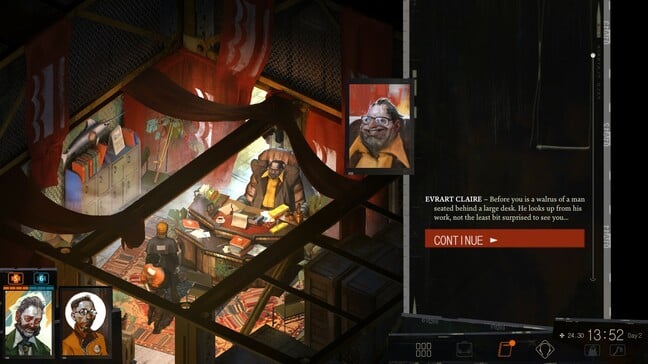 That's another problem – there is just so much dialogue. At times I found myself clock watching for how much longer a conversation might take. Twenty years ago I might have thought this was a neat focus, but Planescape: Torment, clearly a huge influence here, has already done it and these days I tend to enjoy having to do more in games than mouse 1 all the things. There's only so much excitement I can squeeze from a skill check-based system, where the amount of points you have in a certain attribute will make the simulated dice roll more favourable. Sure, somehow I managed to pull off some checks with a sub-20 per cent chance of success, but I still didn't feel like I achieved anything. There are white checks that can be retried and red checks that cannot. If you speak to the right people or stash points in the right skill, you can reopen a white check, but the payoff isn't always worthwhile so I had a bunch left over by the time the game ended. 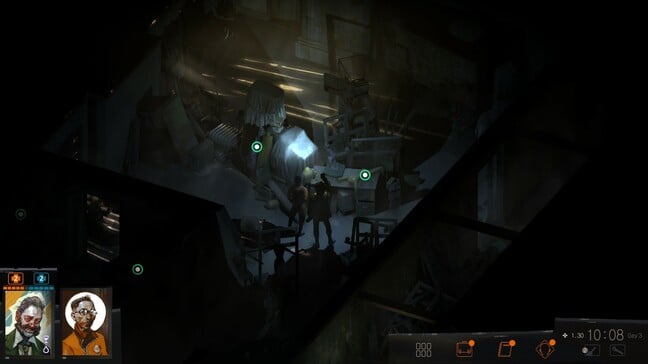 Torches are handy in dark spaces

It's also too forgiving. You can piss people off beyond recall if you decide to be a total idiot – hey, that might be your play style – but otherwise you can explore every branch of a dialogue tree with little repercussion, meaning that what you say rarely matters. It looks deep on the surface but, as is often the case, it's smoke and mirrors.

Then there's the drab, bombed-out, depressingly small map constantly battered by wind, snow and rain. With Disco Elysium's pedigree in the great Dungeons & Dragons RPGs of yore, which we touched upon in October's column, I was hoping for something along the lines of Baldur's Gate 2 – multiple, beautifully rendered locations and an epic adventure. Martinaise is a shithole and it's the only part of Revachol you get to see. Though the area isn't huge, some quests make you stumble from one end of the map to the other only to then have you traipse straight back again – and character movement is not fast. Travelling became tedious towards the end, when I had exhausted all the other points of interest on the way, and despite its bijou size Disco Elysium could have still done with a fast-travel mechanic.

Overall, however, I enjoyed the game. There's no questioning the ambition of the young bucks behind it or their faith in the project. I'll likely be picking up the translation of Sacred and Terrible Air if and when it arrives because Disco Elysium's setting is a breath of fresh air. I also probably missed a lot. Lead designer Kurvitz claims the game "can be played for 120 hours without uncovering all its secrets", but it's not obvious when you've funnelled yourself down a certain skill set and some checks simply aren't possible. Replayability is there, but I'm unlikely to indulge when I know whodunnit. If ZA/UM can pull off a sequel addressing the foibles above, I'll be there in a flash. Even if they don't, I'd still play it. Some DLC would be welcome too. But I can't help but wonder if it's topping so many lists and garnering rave reviews because of some perceived "wokeness" rather than focusing on the quality of the core gameplay. And that ain't disco, baby. ®