Autonomy Trial HPE is holding fast to its claims that Autonomy executives lied during due diligence calls before the ill-fated $11bn buyout of the British software company by the American megalith in 2011.

"It is no defence to a fraud claim that the victim should have discovered the truth, or even that he was careless in not doing so," said HPE in written closing arguments filed in December with London's High Court.

Alleging that, contrary to his denials, former Autonomy CEO Mike Lynch was closely involved in the due diligence process in the days leading up to the buyout, HPE's legal team also claimed then-Autonomy COO Andy Kanter was "struggling with questions of materiality" put to him by HP's due-dil battalion.

Critically, HPE alleges that a list of "top 10 core OEM licence customers" sent by Kanter to former senior HP director Manish Sarin (who previously told the court that the Autonomy buyout was known as a "shit show" inside HP at the time) was "misleading". HPE alleges that Kanter's list "omitted many of the entities that were the counterparties to the 10 largest transactions by revenue that had been included in IDOL OEM revenue in FY 2010."

These are alleged to include multimillion sales to JP Morgan, MetLife, Bank of America and more. HPE's case is that this shows that Autonomy's detailed accounts were wrong, recording revenues falsely and contributing to an overall pulling of the wool over HP's eyes.

Building on that, HPE alleges that "far from showing that HP simply charged ahead with the acquisition instead of waiting for access to Deloitte's work papers [for more detailed auditing], the evidence shows that HP made repeated requests for such access and that Autonomy management consistently refused."

On the accounting side, HPE said a list of post-buyout tasks completed by KPMG on Autonomy, on HP's behalf, "makes no reference to carrying out adjustments to go from IFRS to US GAAP", two different accounting standards used in Britain and America respectively. A KPMG witness called by Lynch, Elizabeth Harris, told the court in her witness statement that as part of the post-buyout KPMG team she had not been tasked at the time to reconcile Autonomy's accounts into US format. HPE hotly denies Harris' version of events and claims she had been instructed to do that very thing.

HPE claims that because Autonomy didn't have to file accounts for Q3 FY2011 after the buyout, its management wiped $130m of debts from its books through an artificial operating loss of $153.1m. Bad debt writeoffs made by Autonomy amounted to $45.6m; $62.3m of credit notes were issued to resellers whom Autonomy had promised wouldn't be left out of pocket.

Labelling this the "dark period", HPE alleges that Autonomy's management "cleaned up unpaid debts on an extraordinary scale, both to 'make whole' its VARs and to stop such transactions from coming to HP's attention."

The US firm produced a graph to the court showing what it says is the true picture of Autonomy's finances immediately after the buyout: 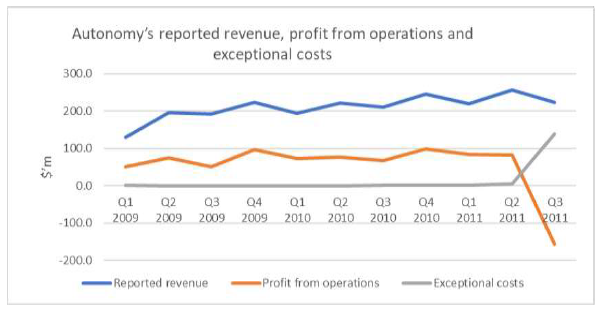 The Register will also be reporting the closing arguments made by Lynch and Hussain, trawling through thousands of pages of legalese so you, dear reader, don't have to, as well as subjecting more of HPE's arguments to close scrutiny.

The Autonomy Trial reconvenes on 6 January for Lynch and Hussain's oral closing arguments. ®