Svelte beast, pretty on the inside

CES Amidst the stifling heat and ever-present body odour of the annual CES trade show, Samsung lifted the lid on its latest top-tier 2-in-1 Chromebook – the Galaxy Chromebook.

Available this quarter, and with a price tag of $999.99 (plus tax), the Samsung Galaxy Chromebook is arguably the most aspirational Chrome OS device we've encountered since the original launch of the Chromebook Pixel in 2013.

Front-and-centre is an impressive 13.3-inch 4K UHD AMOLED display, with a bezel measuring just 3.9mm. At the end of the year, a software update will give the Galaxy Chromebook HDR400 capability, per Samsung, as well as Ambient EQ, which is designed to reduce eye-strain.

Augmenting this are the kind of internal specs you'd find on a mid-to-high-end lappy, pictured below. It packs an unspecified 10th generation Intel Core i5 processor with the standard UHD Graphics. The latter isn't a deal-breaker, given you almost certainly won't be using the Galaxy Chromebook to play the latest Call of Duty. 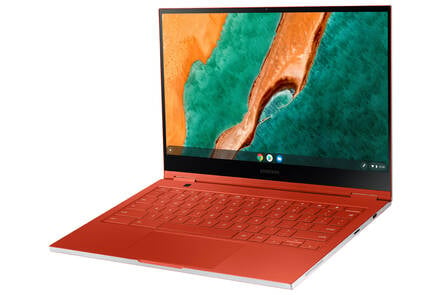 Punters can configure the laptop with up to 16GB of LPDDR3 memory, and the Galaxy Chromebook supports up to 1TB of flash storage.

While that sounds excessive for a device heavily skewed towards the web browser, it's worth pointing out that it's fairly trivial to run a full Linux distro with Chrome OS. And that's without mentioning Chrome OS's compatibility with many Android apps. We therefore wouldn't be surprised to see some power-users max this option out.

The Galaxy Chromebook comes with a few added extras that justify its steep asking price, including a built-in pen and fingerprint reader, as well the latest Wi-Fi 6 tech.

And then there are the dimensions. The Galaxy Chromebook weighs roughly 1KG. At its thickest point, it measures 9.9mm. That's impressive, but given it's packing a full Core i5 processor, we're desperately curious to see how Samsung has handled the thermal demands that inevitably ensue from such a powerful chip. ®