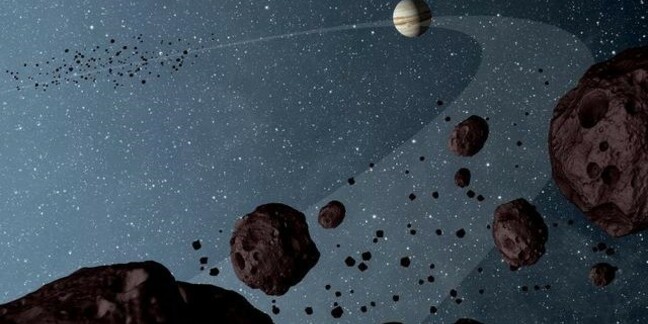 A relatively small rock was spotted orbiting asteroid Eurybates this month by scientists using the Hubble Space Telescope. Luckily enough, that's the same asteroid NASA's Lucy probe is aiming to fly past and inspect in 2027, so boffins will be able to get a closer look at both.

Eurybates is one of the Trojan asteroids, a cloud of cosmic boulders that share the planet Jupiter's orbit around the Sun. Eggheads first observed Eurybates with Hubble in 2018, and the existence of its natural satellite wasn't suspected until November 2019, when a Lucy team member clocked something odd in the asteroid's readings.

The crew were given three goes on the Hubble Space Telescope (HST) to confirm the existence of the rock, and on the third attempt, in early January, spotted the object. The newly discovered natural satellite is 6,000 times fainter than Eurybates, "implying a diameter less than 1 km" according to Southwest Research Institute’s Hal Levison, principal investigator of the mission.

Lucy will be visiting not just 7 asteroids, but 8! Eurybates has a satellite! https://t.co/SbDeJ39eIa pic.twitter.com/yLObclQxtR

"If this estimate proves to be correct," Levison went on, "it will be among the smallest asteroids visited."

Further observations with Hubble will not be possible until June since pointing the veteran space telescope toward the Sun, in the direction of Eurybates, would, frankly, not be a good thing to do.

While they cannot peer at the satellite for the time being, the team now has its work cut out using the gathered data. The architecture and schedule of the Lucy spacecraft, due to inspect Eurybates, will not be affected, but its trajectory might be, as the boffins ponder how to take a look at the tiny body while also meeting the science objectives for Eurybates itself.

The Discovery-class Lucy mission is an ambitious one. Due for launch in October 2021, the spacecraft will undertake a 12-year journey to study seven different asteroids, one in the main asteroid belt and six in the Trojan clusters. All three major types in the swarms will be examined by the probe.

NASA plans seven-year trip to Jupiter – can we come with you, please?

Scientists hope to learn more about the formation of the solar system as well as the origin of planets from these ancient leftovers.

The breathtaking trajectory calls for two Earth flybys following launch in 2021. The spacecraft will then swing past a small main belt asteroid (named Donaldjohanson for the discoverer of the Lucy fossil) in 2025 on the way to the L4 cloud of Trojans (comprising Eurybates, Polymele, Leucus, and Orus) in the 2027 – 2028 timeframe.

The spacecraft will then swing back for another Earth flyby before heading to the L5 cloud and an encounter with the Patroclus-Menoetius binary in 2033. It will then continue cycling between the two Trojan clouds every six years.

The probe itself measures over 13 metres, tip to tip, although most of that is comprised of the pair of six metre solar panels to keep things ticking over during the mission. The diminutive spacecraft chassis will be home to a colour visible imager (L'Ralph), an infrared imaging spectrometer (LEISA), a long-range reconnaissance imager (L'LORRI) and a thermal emission spectrometer (L'TES.) ®