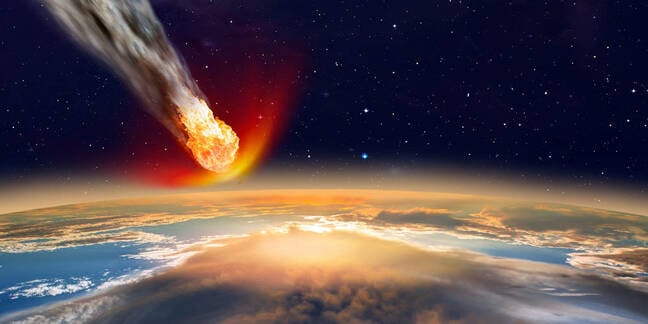 The Windows 7 hysteria machine has most definitely kicked into gear today, with Viking burials and scary statistics for the orphaned operating system.

Business continuity outfit Databarracks sent a Windows 7 box out to water aboard a slightly shonky-looking (and on fire) Viking longboat, sending the OS to Valhalla, before repeating the warning of Blighty's cyber snoops at GCHQ that email and banking shouldn't be done using the veteran OS.

British newspaper the Daily Express took a break from worrying about royal conspiracies to shriek: "Microsoft will make a monumental change TODAY" (their caps, not ours) before ominously warning users to "upgrade now or face the risks." After all "millions are putting themselves at serious risk of attack."

About a third of PC-bothering consumers still use Windows 7, according to Kaspersky's August 2019 figures.

It's almost as if there were a giant asteroid about to smack into the Earth and the only way to dodge it was Windows 10 ... or Linux, or macOS.

Spoiler alert: as prescribed by Betteridge's law of headlines, the answer to the headline "Asteroid alert: NASA tracks a large rock heading past Earth at 43,500mph - Will it hit?" is No. It won't.

In all the hand-wringing over Windows 7, let's not forget the real victims of the Microsoft cull. No, not the herds of boxes in data centres or under desks running Windows Server 2008 R2, but those still clinging to their Windows 10 Mobile phones. After an all too brief reprieve from last year, today is also the final patch Tuesday for the devices.

And while, let's face it, Windows 7 machines won't suddenly stop working today, and continue to run applications for a good while longer (including Microsoft's own Chromium-based Edge browser) it's that last person still using a Microsoft handheld that will be trotting down to the phone store for something a little more supported.

Sadly, the cries of the mobile crowd have been drowned out by the wailing over the perceived Windows 7 asteroid hurtling toward the huddled masses.

Lurking beneath the hysterical caterwauling over today's end of support is the message that, yep, unless you're a business willing to pony up the cash for an extension, it is past time to move on. However, your old Windows 7 PC isn't going to immediately self-destruct, just like your old XP machine didn't.

But just like that old XP installation, miscreants will continue looking for a way in, and you can't rely on Microsoft to keep on plugging the holes in that decade-old code. ®