No Continuum this time, now it's all about the Android

Review Late, lightweight and looking like a Macbook, the new NexDock has finally arrived. But with the world agog over foldables, is it any good?

The NexDock concept has been around for a while, with the first plasticky white version looking a bit like a Macbook Air, except without the brains.

It could support a Raspberry Pi after a bit of faffing, but the makers hoped that Windows Mobile users would put the thing to use as a Continuum device. The subsequent fate of Microsoft's doomed take on the smartphone is well documented.

A few years on, and the NexDock gang were back at the crowdfunding game, with eager backers risking almost 10 times the company's $50,000 goal in order to bring the NexDock 2 to life. 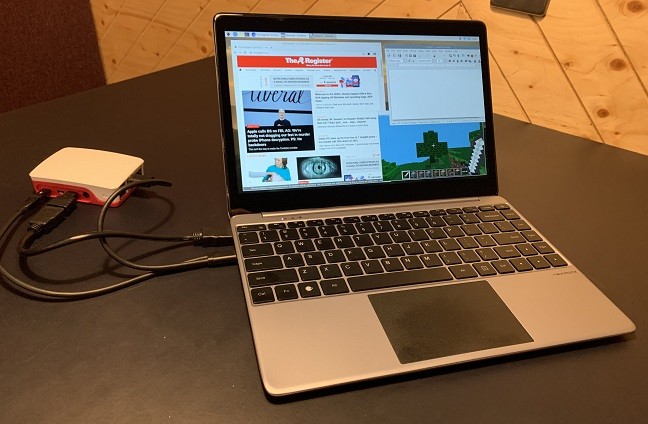 A bit more than three months after the promised delivery date, the device, promising to bring a lappable world to Android phones and Raspberry Pis, arrived.

The NexDock 2 measures 317 x 215 x 15.9 mm at its thickest point and weighs a chunky 1.42kg. It's certainly not up there with industry lightweights and you'll feel a day lugging the thing around (part of the weight can be attributed to the 51 Wh battery.)

The glossy 13.3 inch IPS screen (16:9 aspect ratio) is 1920x1080 this time around and the materials used in the construction do give the NexDock 2 a quality feel, certainly when compared to its predecessor.

Inputwise, there is a single USB-C 3.1 socket (with DisplayPort) and a full sized HDMI port. There is also a USB-C charging port, USB-C and USB-A 3.0 sockets, Micro SDXC card reader and a 3.5mm audio jack. The USB-C ports are labelled and not interchangeable.

None of these ports are quite like the others Pic: Richard Speed

The edge-to-edge keyboard is backlit (at the press of a button) and while the bezels around the screen aren't as sylphlike as some, the screen is a considerable improvement on the previous model. The touchpad, however, feels a little cheap and, annoyingly, only a US keyboard is available at present (a potential showstopper for some.) 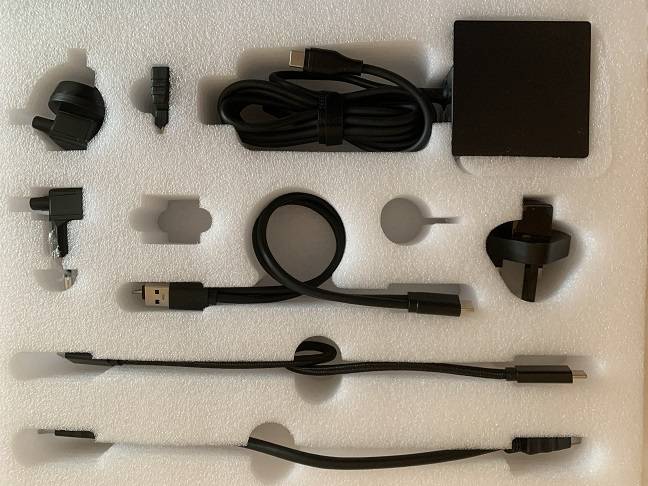 Many, many cables included

Refreshingly, the box also contains a range array of cables. As well as USB and HDMI leads, there are splitters, adaptors and a selection of charger plug heads for the 60W USB-C power adaptor.

First up, I attached the NexDock 2 to a Raspberry Pi 4.

Compared to the last version, the keyboard and touchpad support worked considerably better this around, without need to tinker with bluetooth and its ilk for configuration. You will, however, need most of the bundled cables to coax a Pi 4 into life, including adaptors for HDMI and USB-C.

Once plugged in, however, the experience was painless.

The Pi 4's thirst for power was met by the NexDock, although the diminutive computer ploughed through the charge at a ferocious rate. After three hours of use the battery was down to 30 per cent according to the NexDock's built-in indicator.

That said, I'd have to say the NexDock is at its best as a portable workstation for the Pi 4. Raspbian was easily calibrated so the display filled the 13.3-inch screen and, after tweaking the mouse speed, the experience was akin to having the portable Pi this hack has dreamed of (albeit one with some cables sticking out and a really hot white plastic box hanging off the side.)

I then had a crack at attaching a Samsung Galaxy S10e. Samsung's DeX proved a little recalcitrant at first but eventually fired up, showing a desktop on the NexDock when connected via USB-C.

Productivity applications such as Word and Excel for Android behaved as expected, taking advantage of the extra screen space although with the limitations inherent in DeX. While typing on the large NexDock keys presented no problems, and key travel was sufficient, I did keep brushing the trackpad, which became maddening in day to day usage.

As well as native apps, one of the party tricks of the NexDock should be to show off the likes of virtualisation via something like Windows Virtual Desktop, making the wannabe laptop feel more like a full-blown computer.

I had a crack with the Parallels Remote Application Server and, while there is no DeX client yet (due imminently, a company representative told us), we did manage to bring the Windows 10 desktop creaking into life via a HTML 5. However, neither the Parallels server nor DeX appeared to enjoy the experience, and the latter must take the lion's share of the blame (since the HTML5 client works a treat on Android.)

The Register spoke to NexDock's founder Emre Kosmaz, who acknowledged the delay in shipping the device to backers, describing the hardest part of the process as "shipping a good quality product on time."

Kosmaz also said that a touchscreen was "in our road map" and the company would consider allowing the NexDock to charge a smartphone with the screen off "if there are no technical challenges."

If you've bought into the world of Samsung's DeX and its ilk, then sure. I found the experience a tad lacklustre (although not through any fault of the NexDock, to be fair.)

The machine did, however, shine when attached to a Raspberry Pi 4.

The overall build quality was good, particularly when considering the $250 - $270 price tag it is expected to have when it hits the likes of Amazon. It is, however, quite the hefty beast and while the display is a pleasure to look at (although sadly not a touchscreen), the keyboard is US-only until Q2 2020, with no upgrade path.

Ultimately, for those not seeking a smart host for a Pi, the machine's greatest threat is the secondhand market. A quick glance at the various tat-bazaars will throw up any number of ultrabooks both more powerful and lighter than the NexDock 2, such as a Dell XPS.

And right now, the docked Android experience left me pining for a "proper" desktop. ®