You know how it is, you're innocently waiting for a bag of hot and delicious greasy goodness when you get unexpectedly slapped around the face with the wet fish of a Blue Screen of Death.

Such an experience was in store for Register reader Nathan as he pitched up at a London Victoria outlet of burger-flipping behemoth, McDonald's.

"One moment waiting for our order to be picked and packed," he told us, "Next, blue screen of death." 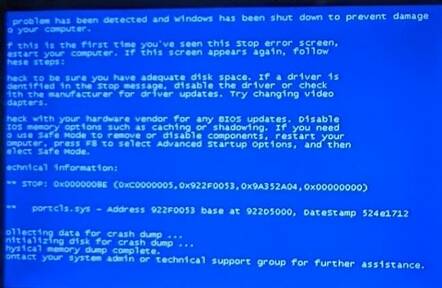 It looks like something has gone amiss with portcls.sys, a library on which many audio drivers tend to be based.

Why electronic menus in a fast-food emporium would dabble in the world of audio is anyone's guess. Perhaps to augment the already garish displays with a voice bellowing "SPAM" in the style of the much-missed Terry Jones?

Or maybe dark muttering, just on the edge of hearing, saying "fsck Veganuary – what you really want is some delicious dead cow topped off with a slice of deceased pig" to lure unsuspecting punters into the store.

We should point out that McDonald's will also sell you something that doesn't involved minced animal if swerving flesh and the products thereof is more your thing.

The Register has contacted the home of the Big Mac to find out what, exactly, its signage isn't "lovin", and will update should an explanation be forthcoming.

McDonald's has spent the last few years rolling out digital signage to replace the distressingly sticky (and expensive to update) menus that required an employee to mount a step ladder in order to refresh a menu or prices. The new-fangled screens have allowed the corporate to fiddle with its products without recourse to the plastic printers.

The grease-monger has also been installing touchscreens in its restaurants to save customers having to bark orders at staff. While we've yet to see one of these depressing beige monoliths have a "moment" of their own, the screens themselves were infamously reported as being coated with all manner of invisible effluent from patrons.

To be fair to MaccyD's, if that's the sort of thing that worries you, then door handles should be avoided at all costs. We'd also give a wide berth to that touchscreen at Victoria's shiny new toilets that pleads for users to rate its level of cleanliness.

London's Victoria station is no stranger to Windows-related borkage. Lines usually reserved for the South East's very own TOFH (Train Operator From Hell), Southern Railway, were recently blocked by a mystery Windows error dialog rather than a train abandoned by a driver.

The borkage, it appears, is moving onto the concourse. Save yourselves. ®

According to the burger-flipping chain, "the screen was going through a reboot and was working normally once that had finished".