Ever wondered what Microsoft really thought about the iPad? Ex-Windows boss spills beans

Former Windows chief Steven Sinofsky has spoken his mind about the launch of Apple's iPad (now celebrating 10 years) and its impact on Microsoft.

Sinofsky said that Microsoft was "blinded" as to where Apple was heading, and was expecting a "pen computer based on Mac".

"The iPad and iPhone were soundly existential threats to Microsoft's core platform business. Without a platform Microsoft controlled that developers sought out, the soul of the company was 'missing'."

Sinofsky was at Microsoft from 1989 to 2012 and a big influence. He was a founding member of the team that created Microsoft Foundation Classes, a C++ framework for building Windows applications introduced in 1992. He joined the Office team, becoming VP of Microsoft Office in 1998 and overseeing the introduction of the controversial Ribbon UI in Office 2007 – a strategic move to distinguish it from rivals like OpenOffice as well as making features more discoverable. He became president of the Windows Division in 2009 and launched Windows 7, rescuing the reputation of Windows after the unpopular Windows Vista. He then went on to create Windows 8, but before that...

Apple's Steve Jobs announced the iPad at a press event on 27 January 2010. Sinofsky revealed how this looked from the perspective of the Windows team. "For me, managing Windows, just weeks after the launch of Microsoft's 'latest creation' Windows 7, it was as much a challenge as magical," he said.

Microsoft was a tablet pioneer. The company released Windows XP Tablet Edition in 2003 – seven years before the iPad. It was full Windows with pen control. Tablet PCs were not a complete failure, but never more than niche, being bulky and expensive. Many were convertible and used mostly like laptops. "Microsoft had been working for more than 10 years starting with 'WinPad' through Tablet PC. We were fixated on Win32, Pen, and more," said Sinofsky.

At the time, according to Sinofsky, the team were expecting Apple to launch a pen-driven Mac as an "answer" to Windows Netbooks, small low-end laptops with longish battery life. Instead, Jobs dismissed Netbooks as "slow... low quality... just cheap laptops." History has proved him correct. The iPad used the iPhone operating system, iOS, and touch control, no pen. It was priced starting at $499, low for Apple hardware. Sinofsky called the iPad "a literally classically defined case of disruption", less capable than a laptop but, Sinofsky said, "what it did, it did so much better. Not only did people prefer it but they changed what they did in order to use it."

The iPad soon outsold any of Microsoft's tablet efforts, but what was the impact on the Windows team? The simplistic answer is that Microsoft (or specifically Sinofsky) bought deeply into the idea that touch control and a simplified user interface was the future of computing for most people, and created Windows 8 in order to keep the operating system relevant in this new world. However, Sinofsky claimed: "Windows 8 wasn't a reaction to the iPad though. It only appeared that way because of the external timing." 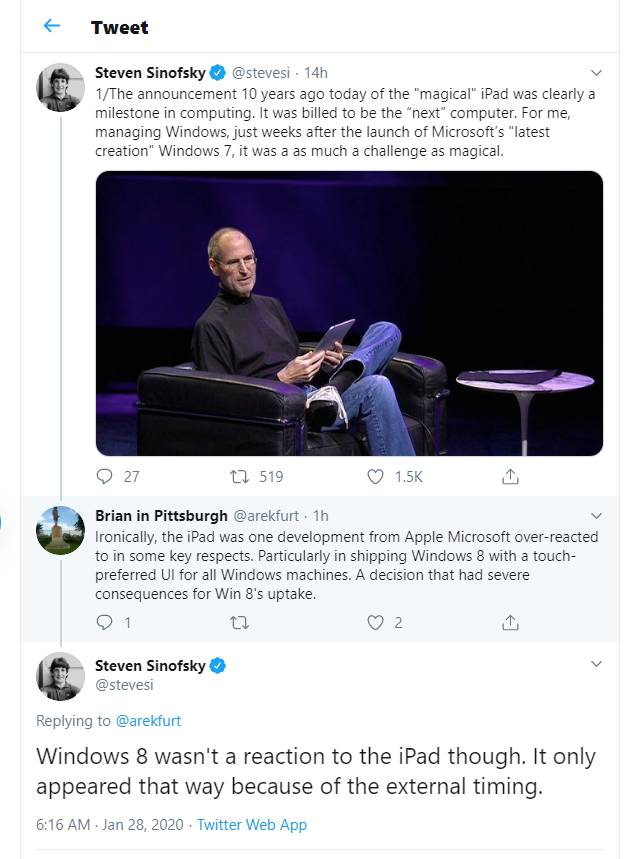 'Windows 8 wasn't a reaction to the iPad'

We should not altogether believe him. The truth will be somewhere in between, but it is doubtful that the radical dual-personality in Windows 8 would have been as it was, if Microsoft had not felt the pressure from iPad and its potential to erode Windows' market share in the home and business. Equally, Microsoft had been working on tablet PCs for years and even at the launch of Windows 7 (before the iPad announcement) Sinofsky had talked up its potential for tablet users.

Sinofsky had a track record of success at Microsoft. He pulled off the Office Ribbon UI, and Windows 7 was a triumph. He was willing to make bold moves, and designed Windows 8 with the knowledge that simply improving Windows 7 would have been a much easier sell. A strategist, he no doubt foresaw that Windows was heading for diminished market share and sought to recreate it as something new, while still keeping faith with its legacy. Making the Windows 8 Start menu a full-screen affair on the "modern" side of the operating system ensured that nobody could ignore it; otherwise, users would simply boot into desktop Windows. The design was carefully optimized for touch, and Windows 8 remains better for touch control than any version of Windows 10 has managed.

Windows 8 failed. Sinofsky left Microsoft in November 2012, just over three months after its August launch. Microsoft steadily rowed back on the dual-personality concept culminating in Windows 10, released in 2015, which returned the desktop to centre stage and removed the full-screen Start menu. IDC analyst Bob O'Donnell said that "the Windows 8 launch not only failed to provide a positive boost to the PC market, but appears to have slowed the market," while Sinofsky, even after leaving Microsoft, took a long-term view, saying: "It will take a long time for things to play out." Both are quoted in our 2013 piece here.

Given Sinofsky's strong track record, why did Windows 8 fail? Multiple factors undermined the strategy. Perhaps Microsoft could have weathered the initial hostility of the Windows community, if the touch personality had been more compelling at launch. There were few applications, though, the UI was blocky rather than beautiful, and it was a far cry from the iPad; it failed the test of doing a only a few things but doing them better.

The Windows 8 developer story was a mess. Sinofsky was a C++ guy and the Windows team were wary of .NET, having been stung by the attempt to weave .NET deeply into the operating system in Windows Vista. This meant that despite borrowing elements of the UI design in Windows Phone, called Metro, the Windows team did not include compatibility with Windows Phone applications and did not even make them easy to port, throwing away an instant base of applications and developer expertise. Apple by contrast based the iPad on iPhone, many iPhone applications ran as-is, and porting was straightforward.

Microsoft twisted and turned, eventually deciding to bring the Windows modern application platform to Windows Phone. By the time Windows 10 mobile properly launched, Windows Phone was already more or less dead – signalled by the departure of ex-Nokia boss Stephen Elop in June 2015. In the end, Microsoft's dithering about the best way to do touch-friendly Windows brought down both phone and tablet.

Despite these missteps, Windows 8 was not all bad. The launch of Windows 8 was also the launch of Surface, which became a successful hardware business and succeeded in driving Microsoft's OEM partners to do a better job with premium PC hardware.

Sinofsky's belief that Windows needed radical change to avoid decline has been partly justified. Windows 10 is now well enough liked by business users, and strong as a developer operating system thanks to its ever-improving Linux integration, but the company has lost its way with consumers, gaming aside, and is nowhere at all in mobile.

Returning to the iPad, though, Sinofsky on Twitter declared his agreement with Apple pundit John Gruber, who says that today, "Apple is steering the iPad full speed ahead down a blind alley." The UI has become more complex and it has fallen "far short of the grand potential it showed on day one."

It is true. The iPad was not the threat to Windows that it appeared to be. The threat was Android, and Microsoft's mistakes with Windows 8 and Windows Phone enabled Android to thrive. ®