Zorin, which provides a Linux distro designed to look familiar for migrating Windows and Mac users, has announced a subscription-based management tool for Linux desktops.

Six desktop layouts in Zorin include Windows, macOS, Touch, Ubuntu, and Gnome 3, though the full range is only available in the paid-for Ultimate edition (€39 + VAT). But the free Core edition is fully usable, includes the Windows-like desktop, and most of the software in Ultimate can be added manually. The main reason to purchase Ultimate is for installation support and to help finance the Ireland-based project.

Zorin OS is based on Ubuntu and currently at version 15.1, released in mid-December 2019. There are several variants, including one using the lightweight Xfce desktop for best performance on older hardware. We took a look at version 15 in June last year. New stuff in 15.1 includes version 5.0 of the Linux kernel, the ability to use an Android phone as a remote for presentations, new desktop customisation options, and the inclusion of the Sans Forgetica font, which is deliberately hard to read on the grounds, it is claimed, that you remember things better if the brain puts in more effort.

More significant is the announcement of Zorin Grid, set for release this summer. This is cloud-based management, initially for PCs running Zorin OS, with support for "more Linux-based operating systems" promised shortly after the initial launch. 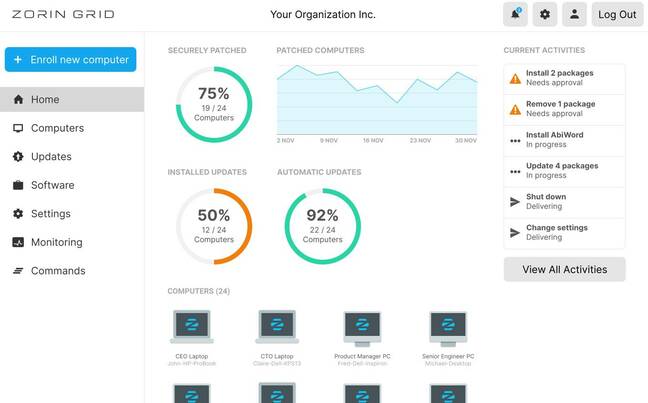 Enrolment of a PC requires installing the client software and configuring it for an organisation. Zorin Grid lets you create groups and target configurations per group.

You can already manage Linux PCs with systems such as Microsoft's System Center Configuration Manager, the open-source Rudder, or Canonical's Landscape.

Zorin Grid could help the company compete in the education market, where Google Chrome OS devices are popular in part because of ease of management via Google's cloud-based system. Zorin users may welcome something tailored to the operating system, though, and with the right combination of capability and ease of use. Zorin Grid promises easier deployment in an organisation than disk imaging, which is the current suggestion for deploying to a large number of machines, as well as offering long-term management rather than just initial rollout.

The firm's founder, Artyom Zorin, told The Register: "Zorin Grid is entirely built from scratch by us, so it isn't based on any other project. The client-side software for Zorin will be open source. However, the Zorin Grid server won't be open source initially, but releasing it under an open-source licence is tentatively on our roadmap."

Peer through the Windows?

Pricing is not yet announced, but will be per computer per month, with a reduction for schools and nonprofits. Canonical charges 1¢ per machine per hour for Landscape, which works out at around $4.50 per month.

Zorin is hoping to take advantage of users or organisations moving away from Windows 7, thanks to its end of support this month. It is true that Zorin OS is superficially familiar, thanks to the Start-like Zorin menu and the Zorin Panel, including the Taskbar, which shows running applications. You can pin applications to the Taskbar ("Add to favourites") and launch them from there, just like Windows.

This similarity does not make Zorin OS magically able to run Windows applications, though. Some will run thanks to the Wine compatibility layer, which is included by default.

The Windows-like appearance is only intended to help users to get started. Zorin OS is an easy-to-use desktop Linux distribution that has the benefits of open-source software as well as the ability to run on older hardware. Presuming it works right, and the price is reasonable, Zorin Grid will make it easier for organisations to adopt. ®