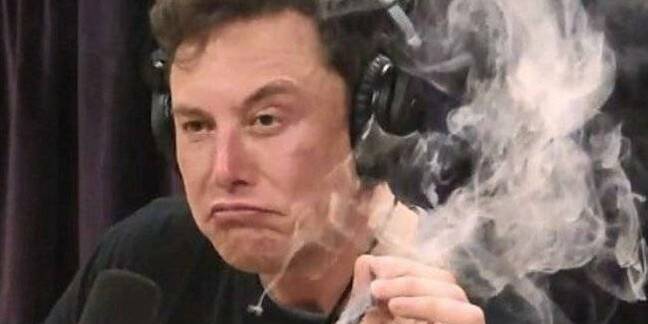 So that's what he was smoking

Living meme Elon Musk has followed up his feelgood hit of 2019, "RIP Harambe", with "Don't Doubt ur Vibe", a saccharine slab of dreamy electropop that we're sure has nothing to do with rubbing Tesla's results in our collective face.

It seems the father of Canadian synth goblin Grimes' child has been inspired to disrupt the music biz – where "disrupt" means not innovation that shakes up a market, but rather "oh god, please make it stop".

Reports from Vulture Central suggest a Register intern had argued that blasting the massive choon in the office constituted unfair treatment. He's now making a round of tea for his insolence.

His Muskiness, who has a side hustle as Tesla and SpaceX CEO when he's not posting memes on Twitter, reportedly "wrote the lyrics and performed the vocals". Yes, all nine words!

Wholesome message, but unless you're about to sell PayPal, maybe doubt ur vibe just a little – there's nothing wrong with measured introspection.

Is there anything this godlike genius can't do? Pictures posted to Musk's Twitter account show the polymath vibing to his new track, though it's unclear how many production gurus were out of shot or how much of a hand they had in rubbing this one out.

Musk isn't the only one who appears to have been, er, touched by his unholy union with Grimes, real name Claire Boucher. At the end of 2018, Boucher went full AI-is-going-to-kill-us-all, dropping the creepily titled nu-metal banger "We Appreciate Power".

Her upcoming release, Miss Anthropocene, is supposed to be "a concept album about the anthropomorphic goddess of climate change".

Of course Elon's faithful were quick to lavish praise on baby's first EDM.

Thank you so much for being who you are, hands down one of the most interesting innovators and dreamers of our generation.

Love the track, so simple, but catchy and chill. Keep it up Elon!

However, we're firmly of the school of thought that Musk should probably stick to rockets. ®