Something for the Weekend, Sir? Greetings from civilisation, for one more day at least. After tonight, I will no longer be a European citizen but an immigrant of indeterminate status.

Don't worry, this won't be a Brexit diatribe. I resigned myself to belonging to a pariah nation long ago, a realisation born from half a lifetime's accumulation of World Cup quarter final exits and Eurovision nul points. And always feeling that you're on the back foot gives rise to a desire to change stance. As I read it, Brexiters wanted to jump before they were pushed.

To get away from all the bluster on both sides, I thought I'd spend a long weekend at the Angoulême Comic Festival. But my brief aller-retour will itself represent a life-changing transformation. I set off on Thursday as a European citizen; when I return on Sunday, it will be as a politely apologetic visitor from an island nation.

Even though it's only a train journey, I have brought along my passport in case an SNCF Herr Flick limps down the carriage to loom over my seat and bark: "Vos papiers, schnell, espèce de rosbif Britischer pig-dog de mes couilles."

Unlike Mme D, who continues to spit venom about the whole matter in a fashion that would put a Ridley Scott alien to shame, I am looking towards a brighter technological future freed from the yoke of European legislation. It means we Brits no longer have to submit impotently to the fascist diktat from Europe that insists we can install Huawei kit in 5G masts if we feel like it, or not if we don't. Brexit means we are at last freed to obey whatever the Americans instruct us to do.

Talking of European instructions, here's how they explain what you shouldn't flush down a train toilet.

Sign in a toilet on a French train illustrating the kind of things you must not flush down the pan.

European clip art is in a class of its own, isn't it? Of course, it comes across as a bit negative – don't do this, don't do that – but thank your lucky stars they didn't design an infographic depicting all the things you should be flushing away.

Still, someone in charge at the French Legislative for Usability Sticker Habilitation (Team W.C.) must have thought the sign needed balancing with a more positive message. Ergo there's also a sign explaining what you are allowed to put in the waste bin. 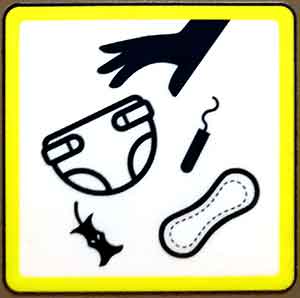 Toilet sign showing the things you are permitted to put in the waste bin.

God knows what I'm supposed to do with my rubber duck. Not that I'm fishing for suggestions, mind. Only for ducks.

Clearly bored with waiting for proscriptive rubber duck legislation to come through from Brussels, a French MP has decided to grasp the technological nettle – the "tekkle" , if you like – and demand that all forms of artificial intelligence, whether a robot or a humble algorithm, be regulated as soon as possible.

The imaginative Pierre-Alain Raphan reckons three laws should do the trick:

1. An AI must not harm a human, nor allow humans to be harmed by its inaction.

2. An AI must obey human commands, unless doing so conflicts with the above.

3. An AI has the right to defend itself, unless this conflicts with the above two laws.

He's a smart guy to have come up with that all by himself, so I bet you're well impressed. You can read up on this extraordinarily original proposal, or stare at it blankly as you recall doing little but throwing paper darts and twanging your ruler while sitting in school French lessons, over here (PDF).

If you suspected M Raphan might be part of the lunatic fringe of national politics, you'd be correct: he belongs to an obscure party named La République En Marche! (LREM) headed by an egg-headed freak called Macron or Mekon or something like that whose core policies are to rob pensions from nurses and beat up firefighters – undeserving wasters in wildly overpaid occupations I'm sure you agree.

Britischer pig-dogs can be reassured that froggy laws of robotics will not be coming to a statute book near you any time soon. Brexit will protect us from such interference in the disruptive industries' ethical right to steal data, launder money, destroy the environment and shirk responsibility.

Instead, we can align ourselves to a broader world view of algorithmic genius, in which the likes of Microsoft Windows is free to continue conjuring up unregulated artificially intelligent notifications such as An error has occurred during an error message.

Heh, I say "we" and I actually meant "you". Me, I'm still on my back foot in the land of blocked washrooms and surplus rubber ducks, and upon my return from Angoulême it looks like I'll have to submit to being protected by the état nounou.

Ah, Mme D has just called me to say she suspects our smart lock and smart doorbell might allow us to be killed as a result of their inability to be anything but utter shite.

Good job I have that nice Monsieur Asimov on speed dial. He'll fix the bastards.

Alistair Dabbs is a freelance technology tart, juggling tech journalism, training and digital publishing. He hopes to return from his jaunt to the world-famous comics festival without being loaded down with new graphic novels as he still has a significant number at home that remain unthumbed. Nor has he read a single word of those Asimovs.@alidabbs