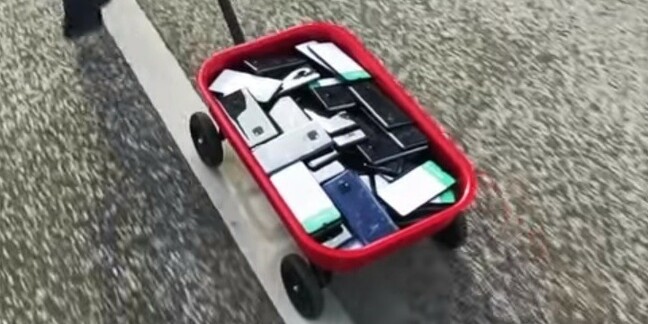 A German artist has had a bit of fun with Google Maps after tricking its free satnav service into displaying traffic jams – by walking around with a hand cart full of mobile phones.

Simon Weckert's performance art piece, titled Google Maps Hacks, is very simple. Weckert walked around the roads of Berlin pulling a small hand cart behind him. Inside the cart were 99 "secondhand smartphones".

With all of those phones connected to Google Maps for driving directions, it is trivially easy to fool the multibillion-dollar adtech company's systems into believing that there is a severe traffic jam in the area. Even when there is no traffic jam in reality.

Describing Google Maps as having "fundamentally changed our understanding of what a map is, how we interact with maps, their technological limitations, and how they look aesthetically," Weckert posed the question on his website:

What is the relationship between the art of enabling and techniques of supervision, control and regulation in Google's maps? Do these maps function as dispositive nets that determine the behaviour, opinions and images of living beings, exercising power and controlling knowledge?

Google Maps picks up the location of phones through a combination of explicit GPS geolocation and mobile network base station geolocation, the principles of which The Register explained in 2007.

Far more recently than that, we also asked Google about the introduction of a rather dubiously named mode called Maps Incognito, which means your location data isn't saved to your Google Account so you can blush at it later on.

It's not only Google that can tell where you are: back in 2014 Edward Snowden's revelations included the startling snippet that "anyone using Google Maps on a smartphone is working in support of a GCHQ system".

We have asked Google if it wants to comment on Weckert's amusing caper and will update this article if the biz responds. ®

Journey into live volcano is a feature, not a bug

Stop us if you've heard this one: Aussies probe Google over misleading location stalking claims

The case certainly rings a bell back in Europe