The Register's resident brick botherer picked up Lego's new International Space Station (ISS). But is it any good?

The ISS set has its origins in the Danish toy maker's Ideas programme, which has furnished enthusiasts with the likes of the mighty Saturn V set over the years. This take by builder XCLD, a scaled-down version of a larger incarnation, won the fan vote last summer and so here we are.

The set, number 21321, was released on 1 February after a campaign teasing its arrival. And goodness, it is a fun thing to build, even if it is jam-packed with technical errors as well as plastic pieces. 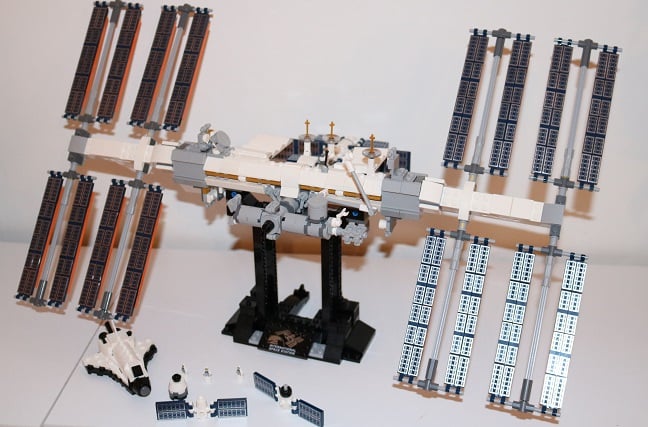 For those keeping count, the compact box contains 864 pieces and is supposedly aimed at ages 16 and up. That's down on the epic Saturn V set (soon to be retired) but still enough to fill a few hours of assembly. The set also features the same miniature astronauts from the Saturn rather than the full-sized minifigs of the Apollo 11 Lunar Lander or Space Shuttle Expedition sets (below is a shot of the ISS with Expedition in the background for a sense of scale). 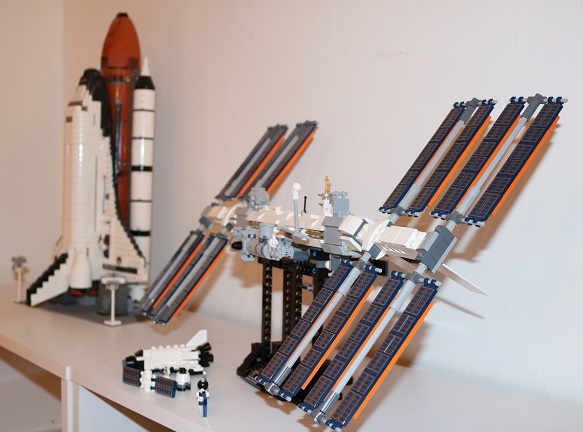 The ISS with a much larger friend Pic: Richard Speed

The build itself was relatively straightforward and despite the age printed on the box, my seven-year-old had no problems sorting the pieces from the the six bags and following the instructions in the booklet (which also contained information about the design and a brief history of the ISS itself).

Sadly, the ISS imagery emphasises the many, many technical errors of the set; some of which are understandable due to the limitations of the Lego system but others, such as the number of pre-printed windows on the cupola module, are maddening for purists.

Speaking of the cupola, those with fingers as fat as mine will be delighted to learn that there are no stickers in this set. Everything, including the dozens of solar array parts, is thankfully pre-printed.

Back to the build. The scale is, alas, all over the place. The truss on which the modules and solar arrays are mounted is huge when compared to the modules mounted beneath. This is a shame since the version originally pitched looked a bit more in proportion, but I imagine that the need to support those impressive arrays required some strengthening. Going to scale might also have required more custom parts, which is a pain when using the pieces to create something new, so the company can be given a pass.

It is, however, a disappointment that Lego skipped the opportunity to follow the construction steps of the ISS itself (the solar arrays are bolted on at the end) and the choice of visiting vehicles is curious. There is a Shuttle, which sadly can't be docked out-of-the-box (although self-proclaimed Internet Rocket Scientist Scott Manley has shown off a neat solution) as well as a Dragon, Starliner and Soyuz. Additional craft docked to the model include what I reckon is a Progress and Cygnus. I didn't spot a JAXA HTV, and the Crew Dragon is also absent.

There is less scope to "play" with this set following construction, with the sturdy stand indicating it is very much for display. Moving parts include rotatable solar arrays and an articulated robot arm. The detail (once one gets over oneself concerning the scale) is impressive. From the exposed facility on the Japanese experiment module, to ESA's Columbus and the selection of Mir 2 leftovers that form the Russian segment, one can't help but be impressed with what can be achieved in Lego at this scale.

And, of course, there is the discussion when building the thing. My seven-year-old daughter (with little fingers) did much of the fiddly work, and the set represented a springboard to talk about what the ISS is, how it was constructed and what all the elements do, much like the Apollo 11 lander and Saturn V models. Except popping outside on a clear night and spotting the latter two overhead isn't an option.

It is impressive to look at, but once complete the urge to "improve" the design is overwhelming. Scott Manley's Shuttle is one way to go. Another would be to add the missing modules that were cancelled over the years. The seven-year-old, who previously attempted to change the Lego Saturn V to Skylab configuration, before deciding it made much more sense to stick a Shuttle on top, already has plans to bolt the external tank from the 10213 set onto the ISS. As well as a roller coaster "for getting back to Earth faster". And a pet shop.