Even Fulham Broadway is no sanctuary from The Curse Of Bork

Bork!Bork!Bork! Those worrying about what befell the near-universally disliked Windows Vista will be delighted to know that its name persists on-screen in UK branches of phone flinger EE.

Spotted in glamorous Fulham Broadway over the weekend by Register reader Julian, today's entry in our Bork!Bork!Bork! thread sees "Vista" being a bit poorly in an outlet of British Telecom-owned EE. 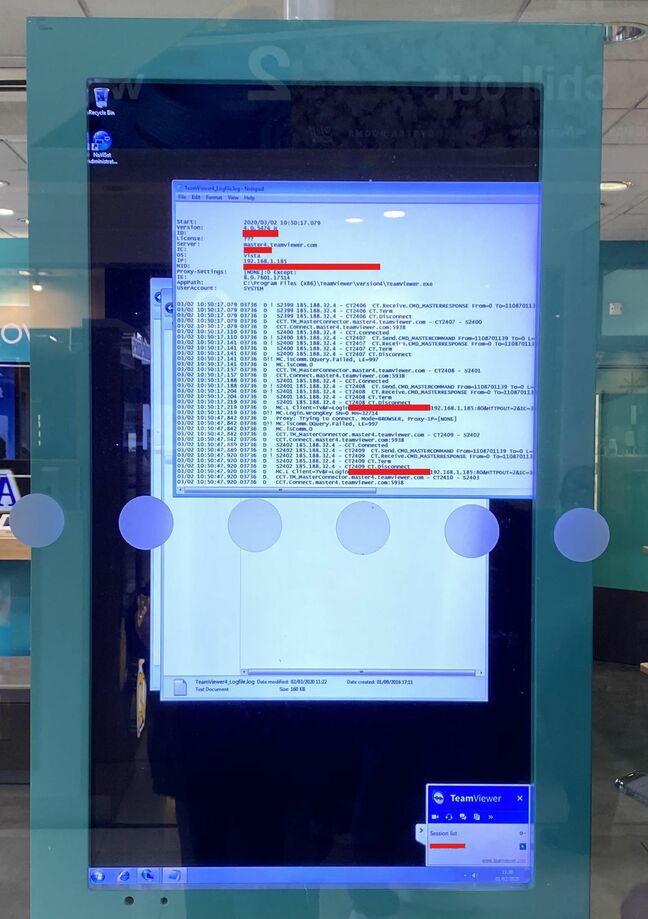 EE itself was founded on April Fool's Day in 2010, and it is surely no coincidence that a mere fortnight later the first iteration of the successor to Windows XP went out of support. No to worry, though – the final service pack limped on to 2017 before Redmond finally pulled the plug.

However, in this case (as spotted by commenter Vince800) it is likely Windows 7 (also out of free support) that TeamViewer has mistaken for Vista. Yep, that log file made us think "Vista" too.

Punters expecting to see EE's latest offers for smartphones were instead greeted by an attempt to use TeamViewer to deal with whatever gremlins have befallen the display. We'll leave it to you to work out what that log file means – we've blocked out serial numbers and passwords to protect the baffled.

Still, it is good to see TeamViewer trusted by at least one UK communications vendor. Register favourite TalkTalk blocks the service from its network in an effort to thwart the dastardly deeds of scammers and phishing. EE's usage seems altogether more innocent, thank goodness.

What did, however, make us a do a little bit of sick in our mouths was the version of IE in use. Version 8 looks to be installed, which Microsoft would dearly love to see the back of. We can but hope that some – any – alternative is lurking out of view somewhere.

And then there is the date. For some inexplicable reason (and assuming the frankly barking mad US date format has been standardised in post-Brexit Britain), the logs think it is 2 March 2020. Maybe it could tell us if the Intel chip shortage will have eased by then?

Naturally, we asked EE for an explanation were told: "An engineer is working quickly to fix a display error with one of our digital screens in our Fulham Broadway store." ®