The week's triumvirate of TITSUP* is complete

Updated Microsoft doesn't do things by halves. Not content with Teams taking the day off and Outlook labeling everything as spam, now Windows 10 Search has joined the cock-up club.

The problem manifests itself by flinging up a large black box where search results should be on the Windows 10 desktop. Multiple flavours of Windows 10 are affected, and PCs at Vulture Central have also suddenly caught the search sickness.

We're guessing queries are piped to Bing, which isn't responding for some reason, causing all results to not show up on desktops. In which case, we have to wonder, why is it necessary for Windows 10 to send local queries to Microsoft's backend, and why is it programmed in such a way that network failures blow away all results, including local ones? 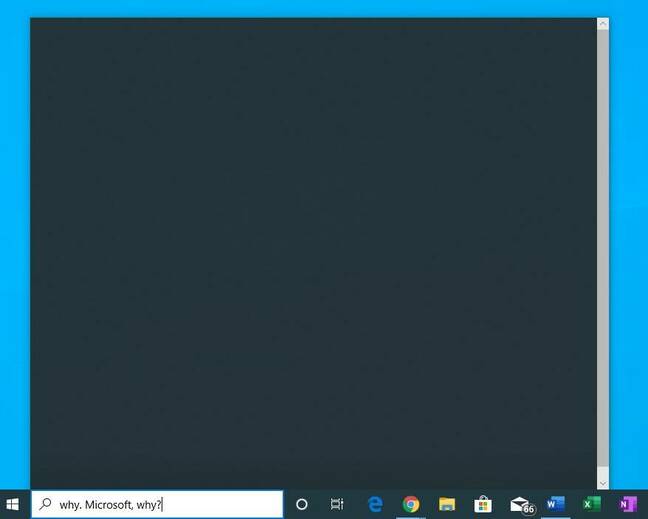 As is par for the course, social media is awash with anguish as people hopefully type characters into the search box and are rewarded with... nothing. A thread on Reddit contains a partial solution to the problem, courtesy of the HowToGeek team, which involves disabling Bing in the search screen. The fix involves fiddling with the registry, and as such we'd advise caution. It's a shame that the setting to disable Bing isn't surfaced somewhere a little more convenient. Hmm.

The Start Menu itself appears unaffected. However, if, like us, you use the search box to get to apps – because life is too short to wade through a maze of menus – this outage is doubly maddening. Even typing the name of a known app, such as notepad.exe, and hitting return does nothing. Sad.

A Register reader with the problem grumbled to your sympathetic vultures that he "had dozens of reports" before muttering: "Something with their wonderful Bing integration has broken even local searching!"

Do we detect a note of sarcasm there? "Another fun day of Microsoft pushing their Bing product and ruining everyone's day."

Don't mince your words. However, a bit of server-side sickness managing to stop the local desktop search working is a bit worrying. Searching through File Explorer was still functioning in our testing, but isn't quite the same. The Register contacted Microsoft and was told that the born-again cloud flinger was aware of the issue and an explanation would be forthcoming. We'll update this article when it arrives. ®

The Windows giant claims it has now fixed the problem, which affected Windows 10 Search and a bunch of Microsoft 365 services for customers, by rerouting network traffic. This ensured queries were finally answered:

We rerouted user connections and validated that impact associated with MO203172 has been remediated. Additional details can be found within the admin center.

Incredibly, it seems Windows 10 Search and other services were knocked offline by infrastructure falling over, preventing all search results, even local ones, from showing up on desktops. Yes, it's that stupid.

In a note to customers, Microsoft blamed a "third-party networking fiber provider," that "experienced a network disruption resulting in impact," adding: "We're reviewing our network redundancy options to find ways to prevent this problem from happening again."

You will need to reboot your PC once, twice, or thrice to pick up the connectivity changes, if you were affected by today's outage.