Exclusive Hot on the heels of insisting "diversity and inclusion is a core GitLab value," the code-hosting biz asked its saleswomen to wear "short but somewhat formal dress and heels" to an awards night during its sales kickoff in Vancouver next week – because the company is "trying to step it up."

The request, which went out in an email to attendees, and seen by The Register, was cited by GitLab strategic account leader Hailey Pobanz as an example of communication that could be better aligned with the business's stated values.

"I think it's fine to say cocktail casual without having to denote dress code for men and women," she observed in a public GitLab discussion post. "I personally think it's outdated and sexist to require women to wear a short dress and heels and it doesn't recognize non-binary individuals." 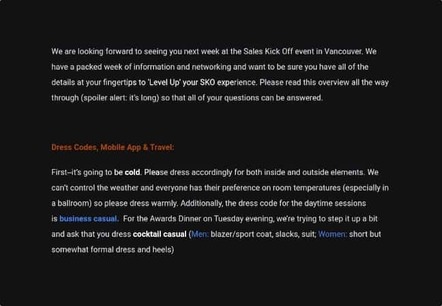 That GitLab issues thread to which Pobanz posted was started two months ago. It began as a discussion about how to make the tech upstart's sales group more friendly to parents and, specifically, to mothers. That thread disappeared from public view on Thursday morning when someone with the company marked it confidential.

A screenshot we took of the discussion thread before it vanished from public view ... Click to enlarge

GitLab insists transparency is one of its six core values.

The ill-received request for saleswomen to dress in short skirts and high heels, and employee reactions to it, prompted an apology from David Somers, director of field enablement, on behalf of himself and, Libby Schulze, corporate event manager. Separately, Schulze apologized for the email on an internal Slack channel.

The Register has asked why the thread was removed from public view and whether Schulze was the author of the email. We've not heard back from GitLab.

GitLab can proclaim diversity all it likes, but it seems to have a real problem keeping women on staff or in management

A source familiar with the San Francisco business tells The Register it is common practice for male executives to have female subordinates take responsibility when things go wrong or deliver unwelcome messages.

GitLab made the above statement about its values in response to our report three days ago about how the company has had trouble retaining or has driven out female executives. In an internal Slack message to employees about the article, CEO Sid Sijbrandij disputed the accuracy of our report.

The Register has asked GitLab to identify any errors so we can correct them. GitLab has not responded other than noting that it cannot discuss personnel matters out of concern for employee privacy.

In a thread about our story on Hacker News, an individual claiming to be a GitLab employee said our report looked accurate:

I work at GitLab. Article sums it up. All of it seems right to me. There's also internal pushback and criticism on the diversity blog post. I guess the plus side is if you're a man and agree with everything the e-group says you'll go pretty far.

CEO and CMO keep saying there are inaccuracies in the story to discredit core concerns. Seems like they're positioning it as performance issues (it wasn't, they were all amazing and top talent) because they'd only not be able to comment on reasons for termination. That makes sense because disagreement with e-group and some in s-group more than once or twice is a performance issue now. Hard for them to say everyone is lying and the lived experience of everyone is wrong and they don't have a diversity problem with a straight face, so implying it's a performance issue seems fitting.