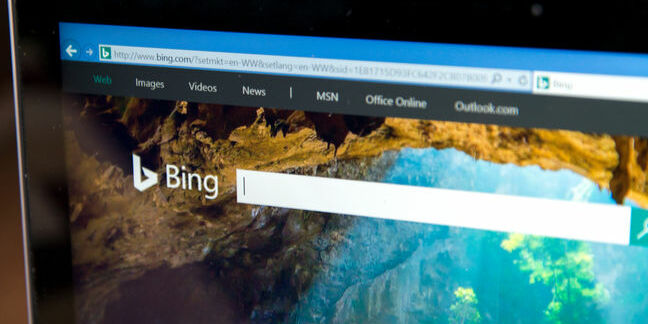 Bing is used by only a small minority of web uers

Microsoft has U-turned on plans to automatically switch browser search defaults to Bing when users install Office 365 Pro Plus.

In January, Microsoft let slip its plans to install a browser extension for Chrome that makes Bing the default search engine when users installed or updated Office Pro Plus, a key part of enterprise subscriptions to Office 365. The move was buried in documentation, rather than being delivered in the usual enthusiastic blog post, suggesting perhaps the company knew it would not go down well.

The stated rationale was to let users, er, take, advantage of "Microsoft search in Bing", which integrates web search with results from internal business data stored in Office 365.

Now the Windows giant has said: "We heard that customers don't want Office 365 ProPlus to change search defaults without an opt-in, and they need a way to govern these changes on unmanaged devices." Therefore, "the Microsoft Search in Bing browser extension will not be automatically deployed with Office 365 ProPlus."

Instead, there will be an option in the Microsoft 365 admin center where "administrators will be able to opt in to deploy the browser extension to their organization through Office 365 ProPlus". The fact that this says administrators rather than users means that some may still get a surprise change, though Microsoft added: "We will continue to provide end users who receive the extension with control over their search engine preference."

Another tweak is that "in the near term" the extension will only be deployed to devices joined to an Active Directory domain, ensuring that users who work on their own computers will not be affected. The company is promising a plan for these "unmanaged devices" in future.

The changes are such that delivery of the search extension is being delayed for an unspecified time.

The problem from Microsoft's perspective remains: how will the company deliver on its ideas about integrating internal and external search if users insist on using other search engines? The short answer is that it should make its product sufficiently compelling that users willingly make the change. There are also other ways to search in Windows 10 (such as in the Start menu) which bypass the default search engine in the browser.

While the change of mind will be welcomed, what is surprising is that Microsoft ever thought it could change search defaults in this aggressive manner without strong opposition. ®