If only there was some way of organising the space

Bork!Bork!Bork! Considering the origins of the word "bork!", we were delighted when news reached Vulture Central of IKEA getting in on the act.

Spotted at the Swedish furniture and household tat supplier's doomed Coventry store by Register reader Simon Jones, today's borkage is brought to you by the number 10 and the words "Windows wants more space".

Simon spotted Windows 10 trying – and failing – to give itself a jolly good updating on the digital signage above what he called "the ever popular and always understaffed hot dog counter". 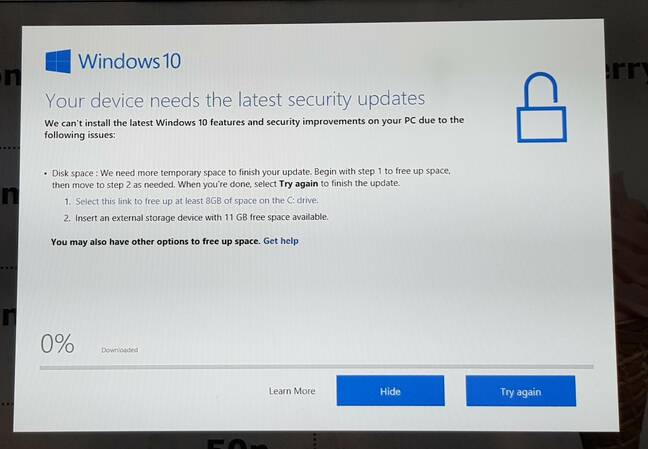 Having navigated the store and loaded up a trolley with relationship-ending self-assembly delights before enduring the check-out experience, he was understandably looking forward to a delicious bit of Swedish sausage (or whatever they put in those things) and perhaps something involving sugar.

Unfortunately, the prices of some of the comestibles was obscured by the plaintive pleading of Windows 10 for a little more disk space in order to install updates.

Perhaps the inability to get even a wafer-thin update onto the hardware was a touching tribute by the retailer to the late Terry Jones: "MrCreosote.exe," observed Simon, was "seemingly not running."

Judging by the state of Windows 10 after the last few patches, that is probably no bad thing.

We contacted IKEA to find out what was on the disk of the device such that there was no space left for those security fixes. The company attempted to assemble an amusing quote on the matter and, well, it went about as well as the wardrobe you tried to put together that time.

"It looks like our screen had too many sweet treats, and ran out of room! After a little rest, everything returned to normal, and the screen is now displaying details of delicacies in our bistro."

Yikes. For those seeking an alternative to hot dog action, may we suggest a meatball or two instead? ®