Your McDonald's demo has expired. For full functionality, please purchase a licence or try another fast-food joint

Bork!Bork!Bork! There is a saying about networking fails: "It's not DNS. It can't be DNS. It was DNS." So far for The Register's column of retail calamity, it's McDonald's. It's nearly always McDonald's.

Today's tale of titsup continues to mine the deep seam of pure borkage that lurks beneath the golden arches. This time we venture outside, to the terminals used by those content to let their vehicles smell like ground-up cow. Or whatever it is they put in those patties.

Allow us to present a demo expiry at the drive-thru courtesy of Register reader Rob, who presented us with two examples of the breed from the fine city of Manchester. One was a new installation, and Rob theorised that perhaps it was a case of someone forgetting to add a new licence or renew an existing one. 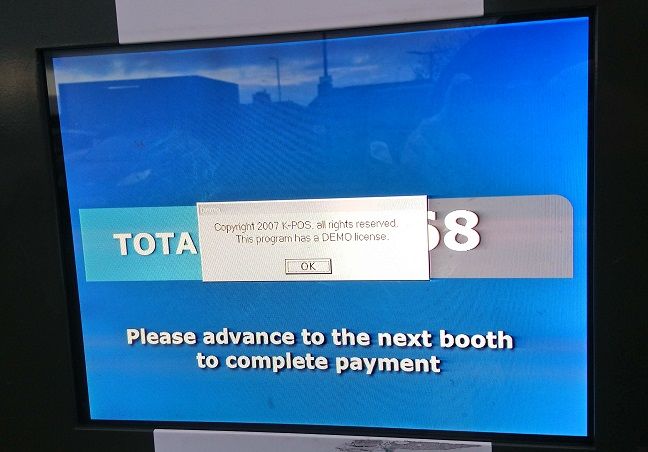 We're not entirely sure what we're looking at here. Perhaps an install attempt has gone awry or a subscription expired. We're confident that the greasy snacks purveyor could pony up the cash for whatever k-POS copyrighted in 2007 rather than stick to demo code.

As ever, we'd welcome your theories in the comments, but at first glance it might be a k-POS device, which rocked a mighty Intel Celeron, backed up by 2GB RAM and shipped with an OS from a selection that included POSReady2009, Windows XP, Vista and 7. Oh, and a nebulous product called only "Linux".

POSReady 2009 and Vista are obviously long out of support, so it can't be those, right? And that looks an awful lot like some Windows chrome on the dialog, so unless the McDonald's admin is a true BOFH, it can't be Linux either. And then there's that "2007."

We asked McDonald's, but we're not holding our breath like we would be if someone opened a sodden M-branded paper bag on a train.

Twitter user @HackerFantastic noted similar bad behaviour back in 2018. It may be that having reached the dizzying heights of a McDonald's POS terminal, the vendor realised there were no new worlds to conquer and threw in the towel (taking the licensing server with them.)

Have you spotted a Horseman of the Borkopalypse riding through your local Tesco? Or seen something strange on the 07:20 to Euston? Share the delight – after all, every bork is sacred. ®