Your mission, should you choose to accept it, is to save data from a computer that should have died aeons ago

Drain you of your sanity, face the thing that should not be

Who, Me? We have yellowing plastic, disintegrating drives and serial shenanigans to start the week in The Register's regular column of reader misadventures. Welcome back to Who, Me?

Today's tale of derring-do comes from Aaron (yes, real name!) and, despite the age of the hardware involved, took place in 2010.

Aaron had spent the latter part of the decade working for a small computer retailer somewhere in the midwestern US. "While I was between 'real' IT jobs," he told us.

He'd left by 2009, but was called back in January 2010 to help recover data from a "weird system". Being a decent fellow (and doubtless not averse to some extra dollars), he agreed to take a look. 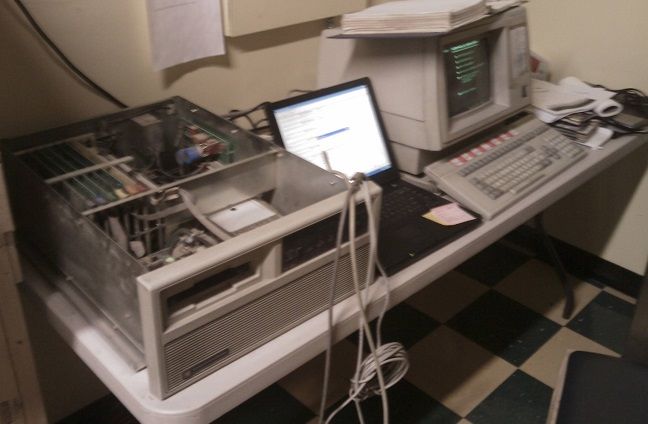 Old meets less old in the backroom of a computer retailer

"A local tire wholesaler had a Texas Instruments minicomputer in use as their inventory and invoicing system, and had been since the 1980s!" he told us.

Looking at the photo, it could be the TI-990, which was sold during the 1970s and 1980s. The 990 came in a variety of guises and is notable for being the platform on which the software was developed for TI's doomed home computer, the 99/4a. Infamously, the 99/4a inherited the 16-bit TMS-9900 processor from the 990 despite having an 8-bit architecture, making it (according to 99/4a guru Mark Wills) "probably the most bodged home computer to ever hit the marketplace".

Or perhaps it is an example of TI's ill-fated foray into personal computing, the TI Professional Computer (a resolutely non-IBM compatible beast introduced in 1983).

The customer had brought in the massive rack-mounted box into the workshop, along with one of the RS232-connected dumb terminals. Aaron opened it up and found, among the dust and grot, a 120MB Maxtor hard drive (probably from the 1990s) and "a tape drive so old that the rollers had long since melted into a mushy pile of sticky liquid".

No backups then. Nice.

There was no MS-DOS here, and certainly no Windows. The PFYs employed by the computer shop had no idea what to do with it. And so the call had gone out to the old man who knew about this stuff, a man who had cut his teeth on Commodores, Apple IIs and mouldy old IBM PC compatibles, a man who was in his early 30s and thus impossibly old in the minds of the under-25s that made up most of the staff.

C'mon SPARCky, it's just an admin utility update. What could possibly go wrong?

Aaron had never seen anything quite like it: "The software it ran was custom built for this company, written by a local programmer many years ago.

"He declined to update it a second time."

So somehow Aaron was going to have to get the data off the wheezing old beast and on to something a little more modern.

The TI machine ran an archaic OS, had what appeared to be a very proprietary bus for the HD controller and no working external storage. The workshop was baffled by it, but our man "devised a plan".

And a cunning plan it was too. Aaron had the customer demonstrate how to print reports (accounts, inventory and so on). These were normally spat out by an elderly 132-column dot matrix printer with a serial connection.

Tap into the serial line – what could be simpler? 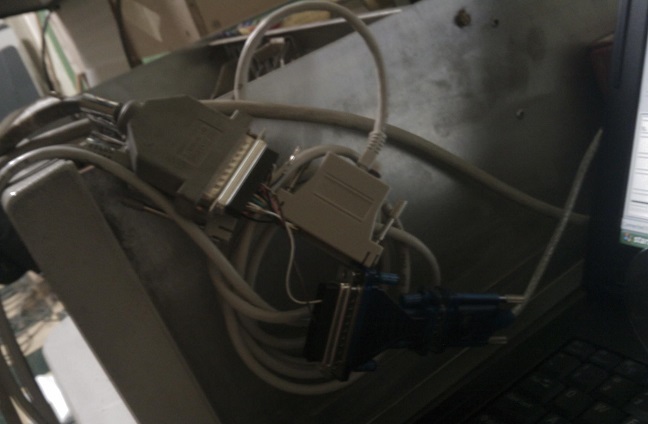 Alas, the TI was smart enough to spot the absence of the rattly old beast ("the software wouldn't print without some of the seldom-used serial control lines functioning," explained Aaron) so the customer was asked to bring in the printer as well.

"We printed every conceivable report that contained the data they needed," he remembered, "hundreds of pages that I intercepted at 4800 bits/second with a 'vampire tap' of the serial lines, connected to a USB serial adapter on a modern Windows PC using Hyperterminal."

The data was then shovelled into Excel, given a good fettling and finally exported in CSV format.

As for those delightful dollars, Aaron did indeed get paid. However, divided out to an hourly rate it ended up being less than half of his regular job. "But it was still a very fun project."

"I'm told the customer moved to Quickbooks on a modern Windows PC. I wonder if they'll still be using it in 25 years?" he mused.

Ever got serious about serial? Or been tasked with dealing with kit so old that the only thing holding the plastic together were the dust bunnies? Share your tale of luck and cunning in an email to Who, Me? ®