A Brighton-based ad agency is scratching its collective head after its website was effectively seized by US Homeland Security.

The agency stopped receiving external emails and turned to its IT support company Ingenious for an answer. They discovered that anyone trying to visit the company website – designate.com – met a landing page with America's Department of Justice, Homeland Security and New York Police Department logos and the stern message:

This domain name has been seized by ICE-Homeland Security Investigations, pursuant to a seizure warrant issued by the United States District Court for the Southern District of New York. 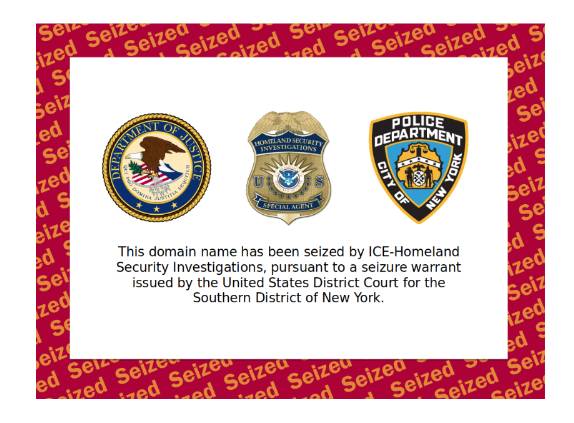 US cops seized control of the website by changing the dot-com's DNS records, allowing them to redirect traffic to their landing page as well as snaffle emails. The ad agency received no warning, and has still not received an explanation.

Ingenious said: "We've never seen anything like this and to do it without any prior contact, or even the most cursory investigation, is pretty bad. And then hold it to ransom until you signed a form. As to why, it's anyone's guess, although I suspect clerical error or someone just not paying attention to what they were doing."

Jason Triandafyllou, director at Designate, finally got hold of a special agent at Homeland Security and discovered the site had been seized as part of an investigation into illegal prostitution.

After persuading them that it was a case of mistaken identity, it was a simple matter of dealing with a US attorney and signing a waiver reneging any claim against the US government for damages. Oh, and waiting for a court hearing in New York after which the company got its website back. Easy, no?

It will take a little time for the world's domain name system to update with the restored DNS records for the site, though for most people Designate.com is back online and the company is receiving emails again.

Triandafyllou, which is a Greek name (not Welsh as this ignorant reporter suspected), told us: "We noticed it on 12 February but suspect it happened on the 11th. We had the domain released on the 19th but it felt a lot longer than a week I can tell you."

He added that it was hard to quantify the damage done. "Anyone looking for a creative agency who headed for our website during the 10 days that this was going on might well have been spooked (pun intended). And we may have missed important emails from prospective clients too. Our SEO has also been floored – we'll have to build up our rankings from scratch." (The Reg wagers that'll soon change though...)

He said they had no intention of switching to a .uk domain, in the hopes that lightning will not strike twice. ®

Column Empty your inboxes, people, we can duck this problem together
Bootnotes22 Dec 2021 | 77

And it was poorly secured, allowing someone to analyze players' private fantasies
AI + ML30 Apr 2021 | 36

In brief Plus: Explore the limits of language models in bizarre research experiment, and more
AI + ML23 Oct 2021 | 47

Guy who wrote women are 'soft, weak, cosseted, naive' lasted about a month at Apple until internal revolt

Updated Ad tech engineer out after autobiography sparks protest – and what does this say about iGiant's hiring process?
Personal Tech13 May 2021 | 160