Your opinion does matter to this Jordanian telco... only it's experiencing some technical difficulties right now

It's the triple! Internet Explorer, McAfee and... is that Windows 8.1 flashing its privates?

Bork!Bork!Bork! It's been a few days and there have been a few borks. Today's entry in the hall of infamy takes us far from London's Vulture Central all the way to Amman, Jordan.

There is something rather glorious about a connectivity failure in the showroom of a telco provider, particularly when coupled with McAfee's finest shrieking about subscriptions.

Spotted in an Umniah outlet in Jabal al-Hussein by an eagle-eyed Reg reader, it looks suspiciously like Internet Explorer has lost a network connection before vomiting an error all over the screen. We fired up IE11 for old times' sake to recreate it and got pretty close as the horrifying thing shuddered into life.

If you'll excuse us, we'll now go and wash our hands. Doubtless somebody will be along shortly to tell us the exact version running. We can, however, tell you that both old Edge and new Edge blurt out the same vaguely nauseating "You're not connected. And the web just isn't the same without you. Let's get you back online!" message.

Our reader (who asked to remain anonymous rather than face the wrath of the telco which lays claim to around 3 million customers) told us: "This is a 'Your opinion matters!' e-booth." He then observed: "However, it doesn't seem that our opinion really matters."

Not that it stopped him giving the screen a hopeful prod, to clear the McAfee nagging if nothing else, but alas, it was totally unresponsive. 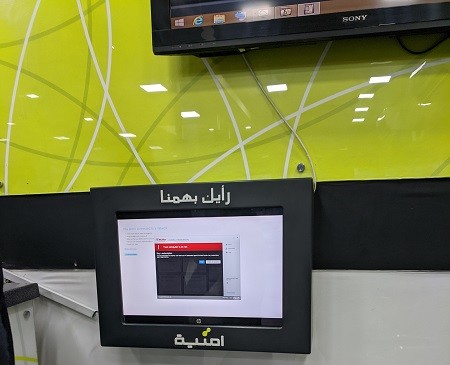 The Windows taskbar pops up at the most inconvenient of times

And lurking above it? "There's Windows 8.1 exposed on the 'current customer being served' indicator display..."

Internet Explorer lost at sea, McAfee demanding money and Windows 8.1? Even considering the latter's longevity (support ends in 2023), flashing the taskbar brings us close to a triumvirate of bork.

Spotted some technology misbehaving with staff oblivious to the pain on display? Snap a shot and send an email to Vulture Central for your chance to see your star in the avenue of Borks. ®