Want to own a bit of Concorde? Got £750k burning a hole in your pocket? We have just the thing

Engine and afterburner 'for static display only'. But they said that about that Vulcan too...

News has reached Vulture Central of an opportunity to purchase an actual, honest-to-goodness Concorde engine, replete with afterburner.

We're big fans of the retired supersonic airliner here at El Reg. It was first put into operation in 1976 and the Anglo-French effort but was eventually retired in 2003 and pensioned off to museums around the world. One can be seen squatting at the end of the runway at London's Heathrow Airport, a reminder of more interesting times.

If the eBay listing is to be believed, the engine in question (a hair under £750k if you want to buy it now, or make the seller an offer) is apparently number 593-610, fitted with an afterburner and comes complete with a mobile stand. Four of the Olympus beasts were used to propel Concorde back in the day and this one was fitted in no.3 position. 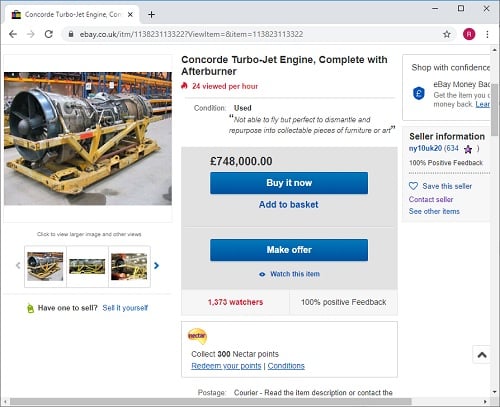 It used to hang off the Concorde now lurking in Seattle's Museum of Flight. The aircraft was originally delivered to Heathrow almost exactly 40 years ago, on 6 February 1980, according to the listing.

Replete with the log book for the original delivery and a certificate of authenticity, the combined weight of engine and stand comes to 5.5 tons and is, naturally, "collection only". Although the seller might be persuaded to deliver the power plant to somewhere in the UK mainland.

Sadly, British Airways has slapped restrictions on its use – it is for static display. To our horror, the seller has also added the text "perfect to dismantle and repurpose into collectable pieces of furniture or art".

If we could rustle up the requisite funds from the bottom of the editor's expense account, we'd slap down a crisp tenner or two for sure in order to keep the beast together.

And as for static display? We spoke to the team behind the restoration of the turbojet Bluebird boat, who managed to fire up an engine on a Vulcan that had sat dormant for over three decades, and the answer was... yes.

Bill Smith of the Bluebird Project told us: "We've no doubt whatsoever that we could get a tune out of it," although he cautioned that the team would need to take a close look at the thing. However, the similarities between the Olympus engine of Concorde and that of the Vulcan (and the relative simplicity of both) meant a restart should be possible, despite the former being a much bigger beast.

"Put some fuel in it, turn it over and light the fire," he said.

Smith added that in Concorde's case, the engine was a part of a far larger system, and compared to the Vulcan, the flight envelope supported was vast.

The thought of hearing one of those engines spinning up once more is quite something, and we'd be happy to pass on the seller's details to the Bluebird Project. Crowdfunder, anyone?

We naturally contacted the seller to get more details as well as British Airways, but have not received a response from either. ®