Kubernetes is 'still hard' so VMware has gone all-in on container-related tech with expanded Tanzu, vSphere 7

The K8s on-ramp you didn't realise you need, or so Virtzilla hopes

VMware has followed through on its promise to make vSphere capable of managing both virtual machines and Kubernetes (K8s) clusters by announcing version 7 of vSphere and a plethora of other container-related tech it hopes will give developers a consistent layer of services to let them go crazy with containers.

The vSphere upgrade to version 7, described by CEO Pat Gelsinger as "the biggest rearchitecture of vSphere in a decade," gives customers a reason to upgrade beyond all the new whistles and bells by delivering on what VMware called "Project Pacific" at VMworld in August 2019, namely putting VMs and Kubernetes infrastructure side by side in vSphere, and letting vAdmins manage both with the same tools and techniques. 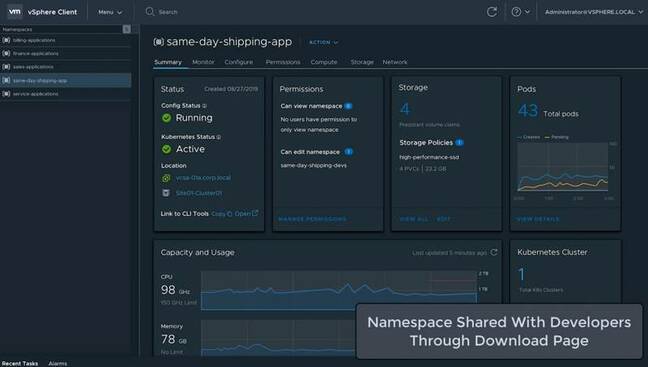 That matters because VMware knows that containers and K8s are the new must-have abstraction and wants to protect its franchise.

Another audience knows that too: independent software vendors (ISVs) who are tired of cloud because a decade ago their life was simpler when selling software required one version of their wares for Windows, another for Linux, then making sure their products behaved when virtualized.

Today ISVs need to write for Windows, Linux, VMs, the slightly different requirements of the six hyperscale clouds and their marketplaces plus whatever oddball requirements distributors dream up for their own cloud software souks.

VMware execs told The Reg that ISVs definitely want to code for fewer abstractions. Preferably just one, in fact. So they're backing K8s – with some even telling customers to get ready for it.

Which is where vSphere 7 offers immediate value to VMware's hordes of happy customers, because ISVs will increasingly insist that customers consume their products with K8s.

And with version 7, vSphere is ready to gobble up those apps and vAdmins will be able to get them working without having to become K8s converts.

According to VMware's Kit Colbert, VP cloud platform: "vSphere 7 isn't just about K8s... it's a massive release with a bunch of other new capabilities." These include application lifecycle management, security, and application acceleration via technology acquired with Bitfusion in July 2019. This enables remote management of GPUs, FPGA (Field Programmable Gate Arrays) and ASICs (Application Specific Integrated Circuit) for hardware-accelerated performance. An obvious use is for AI and Machine Learning (ML) where intensive computation is required.

Colbert added that for vMotion (for live migration of VMs) and DRS (Distributed Resource Scheduler), "we've changed the algorithm, really rewritten it, to be much more efficient and focused on VM performance and health."

The new cut of vSphere offers plenty more for vAdmins. It is better at updating itself, to shorten vAdmins' to-do lists through the wonders of automation. It has also gained GPU virtualization prowess and support for persistent memory. Throw in enhanced vMotion that's better at lifting and shifting even the largest VMs, and VMware is confident vSphere can now handle even the kind of real-time analytics apps that businesses are building. As such, vSphere 7 is a continuation of VMware's long quest to virtualize everything.

Of course, the more important upgrades include the addition of more APIs so that developers can do the infrastructure-as-code thing. And those APIs let developers drive both VMs and Kubernetes, making ye olde vSphere more relevant to "modern apps".

This matters to VMware because it long ago conquered data centre ops. Despite giving away Hyper-V, Microsoft never won more than about 20 per cent of the market. Citrix quit. Oracle scarcely achieved afterthought status despite typical licensing shenanigans.

But VMware has never excited developers, an audience that flocked to hyperscale clouds and their preferred ways of developing software.

Which is why VMware's other big new launch matters: the Tanzu suite is there to calm developers down once they're excited by clouds and K8s.

Tanzu, announced at the VMworld event in August 2019, is a portfolio of products centered on K8s. VMware completed its acquisition of Pivotal in December 2019, which brought Pivotal's PKS (Pivotal Container Service) K8s distribution, now known as VMware Enterprise PKS. This is now part of Tanzu. Earlier in 2019, VMWare also acquired Bitnami, a specialist in packaging open-source applications for easy deployment to targets including K8s. This technology is now behind the Tanzu Application Catalog, which allows users to deploy commonly used applications and runtimes (such as node.js, Wordpess, MySQL or TensorFlow.)

As explained to The Register by Bruce Davie, VMware's CTO for Asia-Pacific and Japan, Tanzu is analogous to Google's site reliability engineering teams in that it provides the services developers need to wield infrastructure without breaking it.

The VMware Tanzu Portfolio, a collection of products centered on Kubernetes

The way he sees it, before server virtualization, each application had its own hardware, storage and networking silo. VMware pointed out the folly of those silos, then fixed them.

Now the company recognises that developers exist in all sorts of teams inside a company, but suggests they work with a common layer to avoid building wasteful and/or incompatible silos.

Hence the Tanzu portfolio's ability to work across multiple K8s distributions and public clouds, to deliver control and choice. Tanzu includes "Grid", a K8s distribution used to deploy clusters across multiple clouds, and Tanzu Mission control can manage those clusters regardless of where they reside. Developers get the environment they want and businesses get less (likelihood of) duplication thanks to a consistent services layer that avoids the need for each application team to roll its own infrastructure. 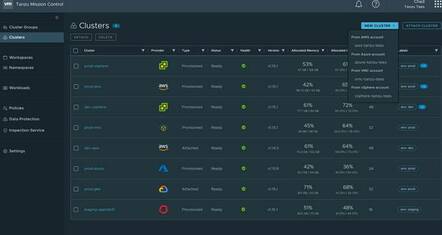 VMware thinks this position as services for all of an organisation's developers is its sweet spot: the company feels that K8s is too low down in the stack, while Pivotal was too high. Now it believes it can offer a full stack for everything a K8s-curious company needs - and hook it all into vSphere so they don't need to reinvent ops. 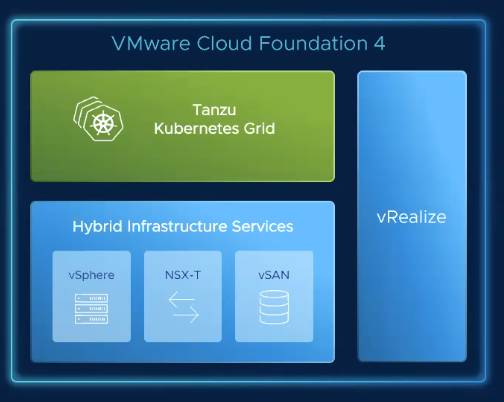 And just in case all that's not enough to digest, a new cut of Cloud Foundation – VMware's bundle of vSphere, vSAN (now at version 7 with unified management of block and file storage), NSX-T (network virtualization that is able to span on-premises and public cloud) and automation – helps things along by providing the means to take Tanzu across private and public clouds so that VMware-powered cloud operators can join in the fun.

Gelsinger, briefing the press ahead of today's announcement, was also keen to talk up the value of Spring, the open-source Java application framework maintained by Pivotal, and what he calls "intrinsic security" in the VMware stack, bolstered by another 2019 acquisition, that of Carbon Black.

VMware's problem is that its traditional place as providing the software to manage on-premises infrastructure is under threat from public cloud providers who mostly remove the task of infrastructure management, performing it as part of their service. AWS, Microsoft and Google have also jumped on K8s as a further abstraction, providing a platform for running containerised applications. The obvious question: what is the role for VMware in this new world?

The company's answer is to provide its own stack, including K8s, for both public and private cloud, and provide customers a VMware-shaped view of the technology so that they can continue to use its tools while getting the benefits of both public cloud and modern application deployment. VMware will operate its services for you on AWS, or you can use them on Azure, Google or other cloud providers via partners.

VMware's pitch is based on continuity and its ability to provide excellent management tools. "Customers don't have to build new infrastructure to run that containerised application," said Gelsinger. "K8s is still hard. We're democratizing K8s into the industry."

He added: "We think there's going to be five or six choices for K8s. Amazon and Microsoft, what Google has laid out with Anthos, IBM/Red Hat Openshift, and also Rancher and a few other startups." These choices do not necessarily preclude running VMware's stuff. "A very high percentage of OpenShift runs on VMware," claimed Gelsinger.

The downside for customers is that inserting VMware into their interaction with public cloud adds to the cost as well as giving you a VMware-shaped view of public cloud that may get in the way of the cloud providers' latest native technologies.

That said, with smart acquisitions and a reshaping of its platform VMware has done a great job of adapting its platform both to cloud and to a more application-shaped perspective. Some pieces seem not quite complete, and in particular the DevOps story looks like the weakest part. There was some talk of continuous integration/continuous delivery but the company could do more to bake this into its suite. Complexity is another issue, and making sense of how Tanzu, vSphere, Cloud Foundation and their various components fit together is challenging, which is not surprising bearing in mind the numerous acquisitions. But VMware's biggest asset is its existing strong relationship with enterprise customers, and if it can hang onto that, it will keep them despite the move to public cloud and k8s.

So all it has to do now is sell that lot into the COVID-19-constrained economy. As do we all. ®

Nobody expects the British Inquisition. (Except everybody. Everybody expected it)
PaaS + IaaS26 Jan 2023 | 4