We checked in with the new Windows 10X build, and let's just say getting this ready for late 2020 will be a challenge

The new Windows 10X build, 19578, has been pushed to Microsoft's emulator with many updates – including a beta of a new File Manager and the ability to run on released (as opposed to Insider) builds of Windows 10, provided you have at least version 10.0.17763.0 (October 2018 update).

Windows 10X is an upcoming OS designed for Microsoft's dual-screen Surface Neo, and will introduce a ton of changes that make the operating system simpler and more secure, but which also risk alienating traditional Windows users. Brings back memories of Windows RT and Windows 8, doesn't it?

Is this even Windows?

We installed Office 365 then went to look at the devices registered to our Office 365 account. The new one is listed as running "Microsoft ContainerOS". The reason is that Windows 10X runs all Win32 desktop applications in a container. This container is missing something significant, which is the Windows desktop itself. Applications run full screen. The closest thing to a desktop is outside the container, where only UWP (Universal Windows Platform) applications run. Windows 10X does include a Start menu and task switcher, though it does not have any notification area (also called the system tray) so applications that rely on that will need reworking.

Surface Neo is scheduled for release in "holiday 2020", which suggests some time late this year, though from what we can see the current preview build is a long way from release-ready. It is only March, but given the lead times involved, we judge that the team has a lot of work to do in order to get this finished in time.

There are a number of new features in this build. You are now allowed to run Windows 10X in emulation on the current release of Windows 10, as opposed to the latest Insider build. This is an advantage for performance, especially if you are running the insider build on an emulator. There is always at least one level of nested emulation as the Win32 container runs within the Windows 10X emulation. The snag is that if you want to use the preview Windows 10X SDK, you do still need an insider build, so in practice developers will need to dedicate a physical machine to this task, or live with performance frustrations. 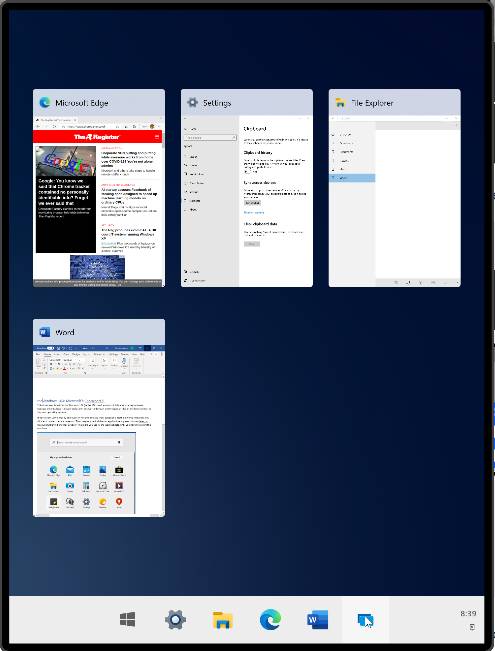 Second, the documentation states: "This update applies the windowing model for Windows 10X to your Win32 apps running in the container. System-defined window placement ensures that users have a consistent and simplified windowing experience that is tailored and appropriate to a smaller, dual-screen, and touch-friendly device. Some gaps remain and will be addressed in a future update."

In plain English, Windows 10X will screw up how multiple windows behave in your Win32 application, so try your application now in order to have some hope of fixing it in time for release (if you care about users on the new version).

We saw some odd behaviour in Word, for example. The first obvious problem is that a single screen in the emulator is not big enough, but spanning dual screens does not look good. Further, if you have two Word documents open and then go to Window – Arrange All, you normally get the two documents in horizontal panes. On Windows 10X, we got the document windows resized to about 25 per cent of screen height (not full screen then), arranged side by side with one on each screen. We restarted the emulator and tried again, this time causing Windows 10X to sulk, resizing the document windows to about 50 per cent of screen height and positioning them on top of one another on the same screen. "View side by side" did not work properly either. What should happen? No doubt the Office folk are trying to figure this out, but developers can expect issues. 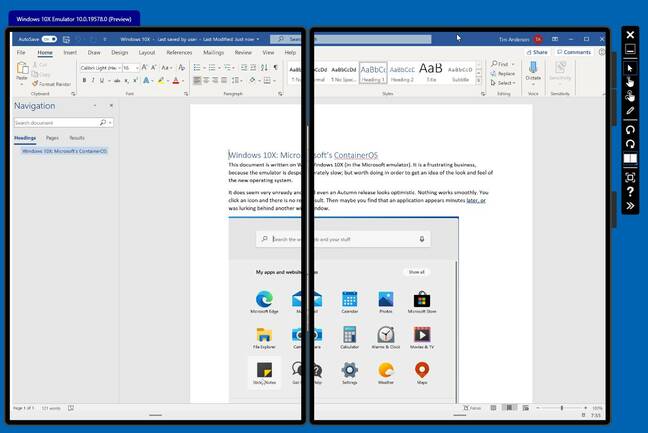 Office runs on Windows 10X, but there are issues

The new build has "an early version of File Manager (labelled Beta)", according to the release notes. The term "File Manager" seems to be a nostalgic slip of the pen; the build has two applications called File Explorer, one indeed marked Beta, with the latter a UWP application dedicated to OneDrive files. In the new File Explorer, local files are not accessible at all. This seems confusing. Even the older File Explorer only displays user folders like Documents, Pictures, Music and so on. Even the device portal, a web application that lets you manage the emulated device, has a File Explorer which only shows user folders. If you want to see the full file system, you will have to do some hackery.

The developer story for Windows 10X is challenging, and not just because of the usual questions about the uncertain direction of Microsoft's strategy. If you want documentation, start here, but do not expect anything comprehensive. Most of the documentation is about creating or adapting UWP applications for dual screens. If Windows 10X is going to work, a key issue is how to get Win32 applications running smoothly, and there is little on that subject.

Second, the preview emulator in combination with the preview build of Windows 10X is not solid. Nothing works smoothly. You click an icon and there is no result. Then maybe you find that an application appears minutes later, or was lurking behind another application. You get odd messages like "No more windows... exiting app in 30 seconds - Word" and then nothing happens. The more you use it, the worse it gets, until you have to restart the emulator.

The fact that there is no hardware available is a difficulty. Windows 10X will no doubt run much better on real hardware, but there are no dual-screen devices. If the company could provide a way to fake it with two screens and a PC, that might help.

The truth is that Windows users will require a great experience from the existing Win32 applications that they depend on, otherwise Surface Neo is likely to struggle. There are not yet enough high-quality UWP applications to sustain a new device, and most Windows users spend most of their time in desktop applications.

The risk is that when Windows 10X does appear, many applications will not work right, users will try it out and decide it is not worth the effort. That would be a shame, since there is plenty of potential for a modernised Windows operating system that still runs Win32 applications. Microsoft cannot afford a re-run of Windows 8. ®